When we say Laser transverse modes. Is that mean what we will get at the output spot of laser beam ? secondly In practice , what TEM01 or TEMnm means ? 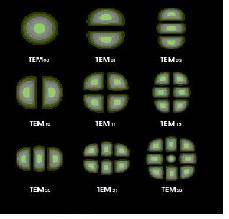 Laser modes are the eigen-modes of a laser resonator: only specific distributions of electro-magnetic field can "resonate" in each particular resonator. Due to the 3D nature of our space, each mode is described by 3 numbers, or indices, $m$, $n$, $q$. The latter is the longitudinal mode number, and is easy to understand: to form a standing wave, the resonator optical length should contain an integer number of half-wavelengths. Otherwise there will be no constructive interference after the wave went through the whole resonator and the field cannot be amplified.

The transverse modes, with indices $m$ and $n$ (hence $\text{TEM}_{mn}$) are kind of equivalent to that, but in the other two directions. The fundamental Gaussian beam ($\text{TEM}_{00}$) is the zero-th order transverse mode, but higher modes can also exist if sufficient gain is available further from the axis of the laser resonator.

In rotationally symmetric resonators, the Laguerre-Gaussian transverse modes are formed. A simple cylindrical tube with HeNe mixture and two spherical mirrors glued at the ends will form such modes.

In practice, most lasers don't have a rotational symmetry, and some $x$ and $y$ direction can be defined (e.g. due to the presence of Brewster windows or because the laser crystal has a rectangular cross-section). In that case, the Hermitte-Gaussian transverse modes are formed. These are the modes shown in your figure.

A real beam is usually a mixture of several modes. The fundamental mode is almost always generated, because it simply requires high gain and low losses close to the axis of the resonator (far from the laser walls), which is almost always the case. Higher modes are usually generated too, unless carefully filtered out (e.g. by introducing losses further from the resonator axis). In special cases, or if the resonator is poorly aligned, you can suppress the fundamental mode and receive one or more higher modes.

With this brief introduction, to answer your questions:

Note that while the transverse modes manifest themselves as the spatial intensity distribution in the cross-section of the beam, the longitudinal modes define the frequency composition of the beam. So while the $m$ and $n$ indices make sense outside the resonator, the $q$ index is meaningless (who cares how long was the specific resonator?). All frequencies usually are close enough to each other to be indistinguishable by eye. Mode beating is an interesting and useful effect where these multiple frequencies become apparent.

Not the answer you're looking for? Browse other questions tagged optics photons laser atomic-physics or ask your own question.

8
Photon pumping in Laser
4
From power of a laser beam to electric field amplitude
4
What determines laser frequency?
2
Focussing laser at km range
0
Different laser modes
3
Spatial and temporal coherence in laser
0
What do you mean by transverse dimension?
0
Will a beam of laser light, in an infinite and ideal vacuum, diverge in time?