I'm trying one of the most basic physics home experiments: creating an electromagnet by wrapping electrically-conductive wire around a metal screw. 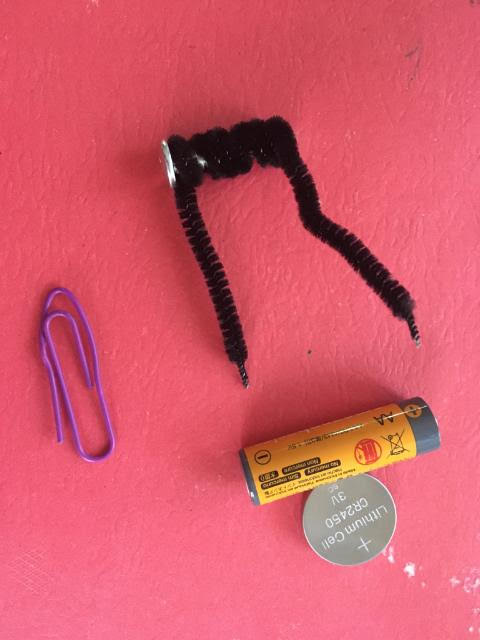 The process is the familiar one you'd expect: I wrap my "wire" around the screw, in one direction only, then connect the stripped ends of the wire to the positive and negative ends of the battery. But: no electromagnet. As noted above, I tried different battery types.

Question: what could be wrong with my "ingredients" or process?

"Getting the thing to work" is actually of secondary importance: I'd like to learn ideas for how to diagnose (or "debug") what could be wrong.

As you might be able to tell, I have the notion that "attracted to a magnet" also means "able to conduct electricity" (especially with respect to the pipe cleaner-as-a-wire-substitute), which I'm not certain is true.

The insulation on the pipe cleaner is fine (I tested it) and the only difficulty is getting good electrical contact at the ends.
It is best to burn off the end insulation and then scrape the metal with a knife / emery paper until the metal is seen to be shiny.

Your null result is due to a number of factor the main one being that the magnetic field produced by your electromagnet is very small and only realistically detected with a compass or a sensitive magnetometer.
You can make one by straightening a paper-clip and then stroking along the paper-clip with a magnet to magnetise the paper-clip. I used a large paper-clip as then as a compass it is more sensitive to changes in the magnet field around it.
You can then either float the paper-clip on water but putting in on an upturned bottle top weighted down with some Blu-Tack or suspending it from a fine thread which is what I did. The tread was about $70\,\rm cm$ long anchored on a table top with some Blu-Tack.
You will find that if the paper-clip is suspended from its centre it aligns with the Earth's magnetic field even to the extent that it inclines along the line of the non-horizontal Earth's magnetic field lines.
For ease of use adjust the point of suspension so that the paper-clip was horizontal.

Take a steel screw and tested it by bringing it close to the compass and often you will find it is magnetised because one end of the screw repels one end of compass.
Both ends of an unmagnetised steel screw would attract a compass. If you wished you could demagnetise the steel screw by heating it to red heat whilst it is orientated in a magnetic East-West direction.

Wind a few turns of pipe cleaner around the screw connected it to a $1.5 \,\rm V$ C-type battery (or one that is close at hand) using finger and thumb and you might notice that the ends got warm.

In some ways all this is "old school" and you can use an iPhone to detect magnetic field.
The magnetometer is at the top right of the iPhone and I used the app Sensor Kinetic Pro which I downloaded from the Apple app store. 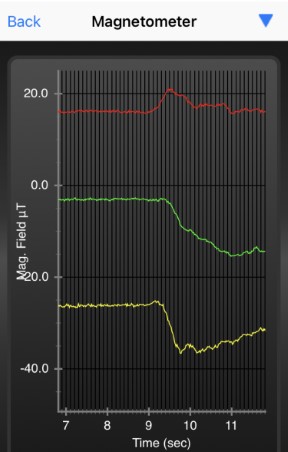 As a final point think of what you had at hand, a battery, a pipe cleaner etc and what you did not have, eg a compass, a reel of insulated copper wire, etc and then remember that Faraday and other also lacked basic "off the self" apparatus.
They had to make the apparatus as they went along and to me it makes their discoveries all the more remarkable.

I think the problem why your electromagnet did not work is:
The pipe cleaner (which you used as the wire) has a conducting surface. Therefore the current did not flow around the screw, but just along from one end of the screw to the other.
To make an electromagnet you want the electric current to flow around the central core many times.

There is a popular joke: "electronics is a science about contacts".

First, you need to check that there is current in your circuit, because there can be breaks in your "wire", as others told you, or the ends of the "wire" can be covered with oxides (in this case you need to dress the ends with a knife or a file). As you don't have a multimeter, you can use your tongue for that (don't try that if the voltage is greater than, say, 10 V).

Another thing: where do you measure the magnetic field? If it is at the sides of your "coil", then the field can be very low there, so it might be better to measure the field at the ends of the coil.

How to measure the magnetic field? So you use a compass app in your phone, but maybe you should use a more specialized app in your smartphone (see, e.g., https://arxiv.org/abs/1901.00857, but I believe there are quite a few such apps).

As others have noted, your field is too small to be noticeable. The 1.5V D battery is your best power source. You can get about 2 amps out of it, which will pull it down to about 1V over most of its life. It'll last about 2hrs at this draw.

The field you generate is proportional to the ampere-turns around the screw. To get 2 amps out of the battery, you need a resistance of about 0.5 ohms. To maximize ampere-turns, you need a wire with 0.5 ohm resistance that is a long as possible while being thin enough to be wound pretty close to the core.

Your core looks to be about an inch long and a little less than 1/4 inch in diameter. In that case, your approximately best results will be achieved by winding about 4m of AWG 26 magnet wire tightly around your core. It's important to use magnet wire, because the insulation is very thin and that allows you to get as much copper close to the core as possible. If your winding is tight and orderly, you should get over 200 turns in 4 layers.

That's 400 ampere-turns, which is probably 50 to 100 times more than you're getting with your 5 turns of pipe cleaner.

The strength of the magnet you make this way will be "noticeable", but not "strong". You'll be able to attract your paper clip from 1-2cm away. Making "strong" electromagnetic forces requires optimizing the magnetic circuit in addition to the electric circuit.

A few off the cuff thoughts: your pipe cleaner might have breaks in it (check with a multimeter), your electrical contact between the batteries and the pipe cleaner may not be great.

But the bigger issues are probably:

This is actually roughly on the order of the field of a refrigerator magnet, but I made some very generous assumptions about your setup, and like I said the wire should not be twisted. Typically to do this you would take a long copper wire and your number of windings would be in the hundreds or at least 10s, not single digits.

Not the answer you're looking for? Browse other questions tagged electromagnetism home-experiment or ask your own question.