How far should I spread my fingers when swimming?

One way to improve efficiency of swimming stroke is to increase area of the stroking surface - for example wear fins on hands.

But what if we increase drag of the palm? If we spread our fingers then the area will be the same, but palm will also capture some water by viscous drag.

If we spread fingers just a little bit, like grid fin, then, as per Bernoulli, water will speed up in the narrow place in between the fingers and lose even more kinetic energy due to drag.

So it looks like it is beneficial for the swimmer to spread his fingers a little during stroke. But I never met an advice like that in any swimming tutorial.

Is it really beneficial and what is the optimal gap / gained efficiency?

For swimming, your goal is to maximize the surface area of your hand to allow for more pulling. So you don't want to "shrink" the area by squeezing your hand into a smaller cup shape. But at the same time, you don't want to open your fingers fully as then you've got a laminar flow and would be akin to using a rake for a paddle.

If you open your fingers a little bit, as you suggest, you will increase the surface area a little compared to keeping them closed and the flow ought to be turbulent and allow for more pulling.

A quick web search shows a few online resources suggesting to do so, the latter even showing the image at the bottom for the ideal position. 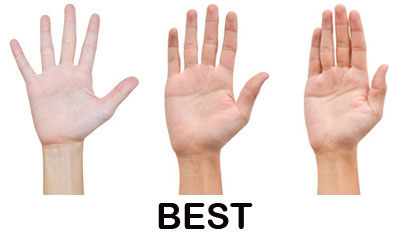 optimal finger spacing (12°, roughly corresponding to the resting hand posture) increases the drag coefficient (+8.8%), which is ‘functionally equivalent’ to a greater hand palm area ... human swimming is severely limited by the localization of most of the engine (71% of total muscle mass) in the non-propelling lower limbs ... ‘oars’ (i.e. upper limbs, responsible of 88% of total thrust 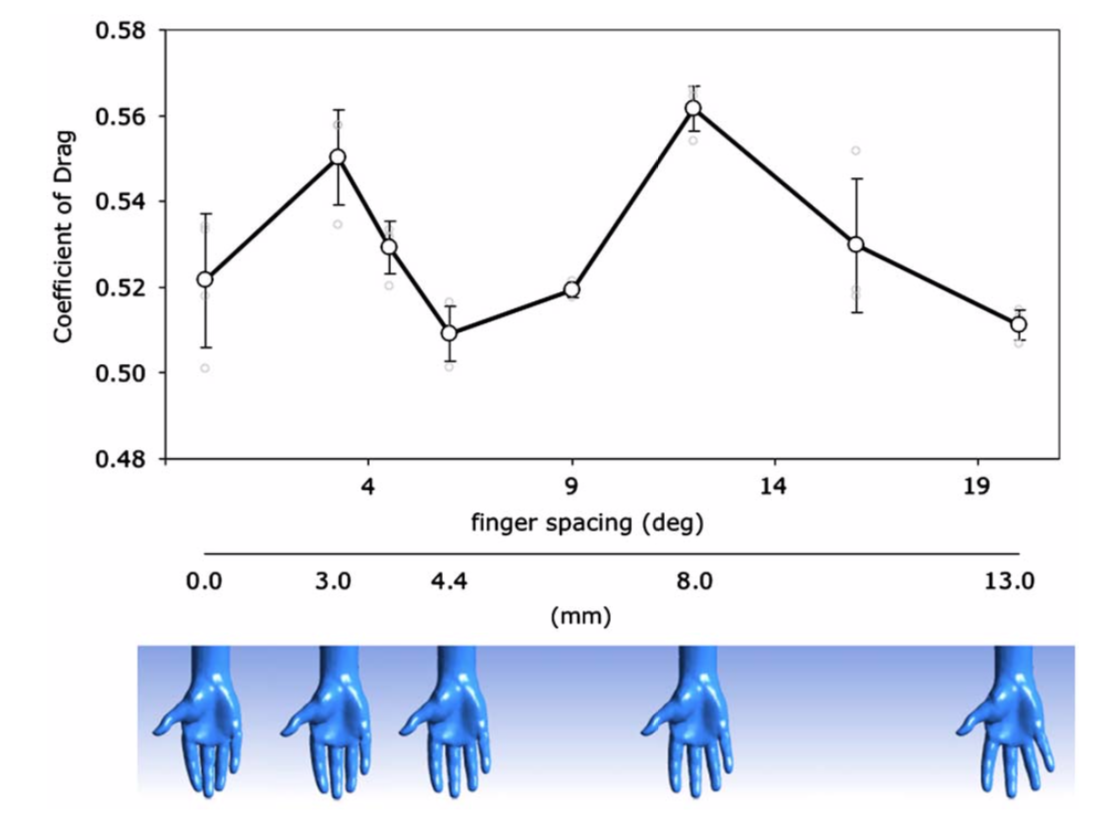 first study showed that the swimmer’s hand experiences a significant increase of drag when the fingers are slightly opened with a spread rate no greater than 6%. ... the fully adducted (closed) thumb configuration produced slightly higher values of drag ... suggesting that the swimmer should keep the palm of his hand fully opened ... 2.11(%) finger spread

The effects of hand configuration on propulsive forces in swimming by Bazuin, Rens

It was determined with 95% confidence that a finger spread of 10∘ creates more stroke force than a fingers-together configuration across all pitch angles tested.

Not the answer you're looking for? Browse other questions tagged fluid-dynamics everyday-life water or ask your own question.

2
How to calculate heat exchange/deltaT in a moving volume of fluid?
20
How far can water rise above the edge of a glass?
14
Why don't I feel pressure on my body when swimming under water?
6
Does something like Pascal's Law apply in a Swimming Pool? If not, how does pressure spread?
3
How fast can fire spread?
1
Why does water spread when thrown?