Given 6 points that are connected with each other with a resistor of resistance $R$, find the resistance between any two points. (Answer: $R/3$) 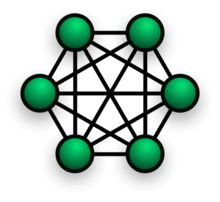 (All the conducting wires have the same resistance $R$.)

I know that such a wording immediately implies that these 6 points are absolutely identical, which makes it possible to apply symmetry arguments that will help in reducing the network to a simpler one.

That is, after choosing any two points in the network, the remaining four points will still be identical, so we can swap any of them and the network will remain the same. Thus, we can remove the resistors which are connected between these other four points, since the points are identical.

I'm told of the following analogy: The system of these 6 points is like a system of 6 absolutely similar balls painted, say, in white. By choosing two points, we paint them in black, thus the system loses some symmetry level, but its certain elements are still symmetrical under certain rearrangements.

Specifically, any two of the white balls can be swapped without changing the system in any way, so all the white balls are identical and we can ignore any resistors between them. But swapping the two black balls still won't change the system, so why can't we follow the same logic and ignore the resistor between them as well?

I'll generalize the question a little bit: why don't we care about other symmetries in the system?

(I'm looking forward a simple explanation, without involving advanced math, as I'm just a self-taught beginner and I'm only familiar with calculus. So I try to avoid matrices and anything advanced which students learn in advanced courses of electronics. I just want to get the idea and the concept itself.)

We can't remove the resistor between the two points we've chosen because they're not at the same voltage.

OK, let's unpack that a little. Imagine that you actually have a resistor network (any resistor network) built and want to measure its resistance with an ohmmeter. To do that, you need to choose two of the points in the network and connect the leads of the ohmmeter to them. The ohmmeter will then pass a small DC current through the network, measure the voltage difference $\Delta V$ between its leads and the current $I$ flowing through the network between them, and calculate the resistance $R$ of the network using Ohm's law: $$R = \frac{\Delta V}I$$

Now, since we're feeding a fixed DC current into the network, and since we only have passive resistive components in it, the network will very rapidly (essentially instantaneously) settle into a steady state where each node is at a constant voltage and each resistor has a constant current flowing through it.

Specifically, the node to which we've connected the negative lead of the ohmmeter is pulled down to some fixed voltage $V^-$, while the node to which we've connected the positive lead is pulled up to some voltage $V^+ > V^-$. Every other node $i$ of the network will be at some intermediate voltage $V_i$ between $V^-$ and $V^+$. Using your colored balls analogy, it's as if we've chosen two balls, colored one of them white and one black, and colored the rest of the balls with different shades of gray according to their equilibrium voltage, as determined by Ohm's law and Kirchhoff's first law.

However, if we want to simplify the system before solving it, we can apply two useful observations:

In your example network, every node is connected to every other node by identical resistors, and so $R_{ik} = R_{jk}$ for all nodes $i$, $j$, $k$. For all but the two chosen endpoint nodes, we also have $I^0_i = I^0_j = 0$, and so all the other nodes except the endpoints can be exchanged without changing the system. Thus, we may ignore any resistors between them and even collapse them all into a single node.

However, the reason we cannot exchange the two chosen endpoints is that we broke the symmetry when we connected the measurement leads to them: those points have current flowing into them from outside the network, which will pull them to different voltages. In particular, the voltage difference will cause a non-zero current to flow across any resistor connecting those two nodes, and so such resistors cannot be ignored when calculating the total current flow across the system.

(If there was no externally supplied current, all the nodes in the network would indeed be symmetrical, and we could correctly deduce that no current would flow between any of them. But that scenario is completely useless for calculating the resistance, since we'd just end up with the indeterminate form $R = \Delta V/I = 0/0$.)

In other words: the only conductance paths contributing are a single "one hop" of resistance $R$ and $N-2$ "double hops" of resistance $2R$. The total parallel conductance of all these path combined is $\frac{1}{R} + \frac{N-2}{2R} \ = \frac{N}{2R}$. The reciprocal of this quantity is the effective resistance between the two nodes.

There is a nice argument for these type of questions. The proof follows from the linearity of the system. Here's how it works:

Ergo using the definition of equivalent resistance and the potential difference between these two nodes, we will have:

so why can't we follow the same logic and remove the resistor between the two chosen points?

OK, I'll directly address your question in part. Specifically, why can't we remove the resistor between the two chosen points?

The answer is an elementary application of Ohm's Law. Pick any two nodes. There is a resistor that directly connects those two nodes.

(2) This current adds to the total current through the voltage source.

Conclusion: you cannot remove the resistor between the chosen nodes without changing the equivalent resistance between those nodes.

Not the answer you're looking for? Browse other questions tagged homework-and-exercises electric-circuits symmetry electrical-resistance or ask your own question.

1
Equivalent resistance between two points of the figure

2
Is equivalent resistance always lower if we add a resistor to a passive electronic circuit?
1
Equivalent Resistance between 2 points
6
Serpentine resistor - Number of bends effect
1
Mirror symmetry in a resistor network
5
How can current pass through (resistance less) connecting wires?
4
Generalized method for dealing with circuit involving symmetry?
1
How could a bulb light up if aĺl the voltage is lost in the resistor?