Why do we even need RF cavities to accelerate particles?

Wouldn't it be easier to just apply a constant $E$ field along the beam axis? This would avoid all kinds of problems like synchronicity, phase change etcetera.

Addendum. What puzzles me the most is the following assertion (taken from Exactly like the pendulum: Synchrotron Oscillation - CERN Indico, professor Tsesmelis): 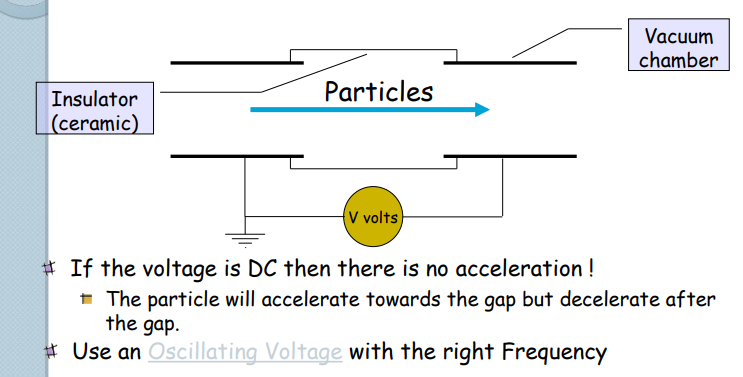 Why should they decelerate?

However, the approach of making things bigger is very inconvenient. For 30 kV electrons, you can do this with a tabletop accelerator as big as a desktop PC. For 300 kV you need several meters of acceleration - still manageable, albeit clunky (c.f. conventional transmission electron microscopes). But if you want teravolts like at the LHC, then you are talking about an accelerator that is roughly as long as the circumference of the earth.

Using an AC approach with RF cavities gets around the dielectric breakdown issue. Now you can use an alternating voltage on a single monolithic piece of metal shaped into a resonant cavity which can sustain an enormous electric field, unlike the metal-insulator-metal stack encountered in something like a DC parallel plate capacitor. The resonant nature of the cavity causes an enhancement of the electric field in certain spatial regions which is approximately given by the quality factor $Q$ of the cavity (typically $10^{10}$ for superconducting cavities). An important upper limit for the E-field arises from AC heating of the RF cavity, which lowers the conductivity and therefore places a limit on the peak field. Using RF cavities also lets you accelerate over a distance that is orders of magnitude smaller than with DC acceleration. Nonetheless, the heating issue among other effects means that RF acceleration still requires a sizeable footprint and "reuse" in a circular geometry.

Because RF cavities are still relatively big, there is a lot of interest in using optical cavity acceleration instead. Since optical light is also an AC electromagnetic wave, the same basic principles should apply as RF cavities, except that optical wavelengths are thousands of times smaller than RF and therefore should enable much, much more compact accelerators. This is still an active area of research, but in principle one could shrink down the entire LHC to fit in a single laboratory room. Howver, there's still a long path of engineering and experimental physics to figure out to using optical cavities to make that happen! Very exciting field to get into the days.

Edit for your addendum: as shown in your image, with DC acceleration you must have all your accelerators in series in increasingly higher voltage. If you just just put a series of plates one after the other as $0$, $+V$, $0$, $+V$,... (i.e. accelerating capacitors arranged in parallel) then you will have that the charged particle accelerates from $0$ to $+V$ and decelerates when it goes from $+V$ to $0$. So there is no escaping having extremely large voltages stacked sequentially (i.e. $0$, $+V$, $+2V$, $+3V$,...). However, with pulsed beams and RF cavities, you can time the RF wave so that the charged particles always sees an E field of the same sign to kick it in the right direction.

The reason they'd decelerate is that the space beyond the positive electrode is, in a practical experiment, surrounded by "grounded" stuff (beam pipe, etc.). So, there's effectively a second gap with a field opposite the first. The solution is to have the potential of the positive electrode change while the particle is inside it, so that when the particle emerges there's no field to decelerate it.

There are ways to make "DC" accelerators, (Cockroft-Walton and Van de Graaff). They are limited in energy because in a DC accelerator, you only get to apply the accelerating field to the particle at most twice (using the "tandem" Van De Graaff trick), and the field is limited by the properties of materials. In a RF accelerator, you can accelerate the particle repeatedly through multiple gaps, and/or reuse the same gap by steering the particle back through it.

You are absolutely right. It would be sufficient.

But, particle accelators are technical devices and as such they are created using various restraints and optimized according to these restraints. It is quite difficult to create and maintain a very high voltage E field, but relatively simple to create and drive RF cavities. Cheaper, more reliably, simpler to produce and taking less space. Your choice.

Using a single E field could be compared to giving your particles a single "kick" to accelerate them. The energy you give the particles is limited by the potential difference you can produce -- high energy requires high electrical potentail. Using several RF cavities will give the particles several smaller "kicks", in principle any amount of cavities you want to have and hence basically giving the particles any energy you wish.

It is important to note that the electric scalar potential $\phi$, expressed in unit of volts, is a single valued function. If there is a downhill that accelerates the positive particle, there is always an uphill that decelerates the positive particle. In other words, it is impossible to realize the Penrose staircase by scalar potential difference. The electric field that applies a force to a charged particle has $-\dot{\vec{A}}$ in addition to $-\nabla\phi$, so it is possible to achieve a continuous acceleration by using $-\dot{\vec{A}}$.

Not the answer you're looking for? Browse other questions tagged electromagnetism radio-frequency particle-accelerators or ask your own question.