If water is nearly as incompressible as ground, why don't divers get injured when they plunge into it?

I have read that water (or any other liquid) cannot be compressed like gases and it is nearly as elastic as solid. So why isn’t the impact of diving into water equivalent to that of diving on hard concrete?

Adding another perspective to the existing answers:

In your usual diving scenario, water is not confined to the points in space it occupied before, while a slab of ground is – on account of water being liquid and ground being solid.

To construct a scenario where you primarily experience the compressibility when diving into water, you would have to exactly encase the body of water with a perfectly rigid wall with only an exactly diver-shaped hole in it – through which the diver needs to enter. (Also, your diver would have to have the same cross-section everywhere along the direction of diving.) In that case, the water cannot escape to the sides anymore and the diver would fully feel that water is incompressible: They would not be able to enter the water at all and crash into it like a wall. 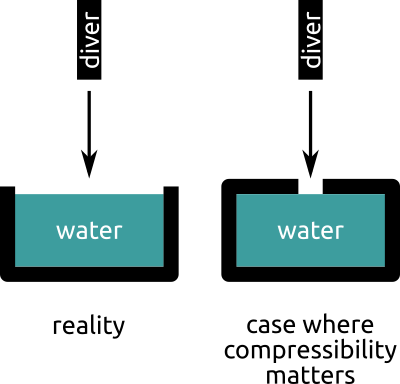 In simple terms, water (or any fluid) will move out of the way; concrete won’t (unless it is hit very hard). The important properties are viscosity and elasticity rather than compressibility.

So why isn't the impact of diving into water equivalent to that of diving on hard concrete?

Water is rather incompressible, but it is not very hard. It deforms rapidly under shear stress, unlike concrete. This greatly prolongs the duration of the deceleration and therefore reduces the impact.

Incompressible doesn't mean that it has to keep the same shape.

But, due to viscosity, water can be "slow" to change its shape under external influence. So when a diver arrives too fast, water can't adapt in time and behave like a brick wall for the duration of the diver's penetration.

Concrete is rigid to a good approximation: it will keep its shape and its volume.

Water is just incompressible: it will keep its volume but not its shape. Water will move out of your way on impact.

For very skilled divers, they will also use a technique where they enter the water hands first, with a particular shape that pulls air in with them. They then spread the hands out, creating a 'hole' in the water that the rest of their body goes into. This creates a sound that divers call a 'rip', as it sounds like tearing cloth when done properly. It also leads to a much smaller splash than entries done without this technique.

Well, depends on the way someone dives in and the altitude.

You might have wondered at some point, why does it hurt when you fall into the water with your belly, but when you fall in with your feet almost vertically to the water you feel no pain. On the internet you can definitely find some answer on this question, for example here: https://www.scienceabc.com/sports/why-does-water-feel-like-concrete-when-you-belly-flop-into-it.html

So as someone dives in, by making contact, pressure is indeed exerted on the surface of the water (or any other fluid of similar physical properties). However, unlike ground, water has the property to change its shape (deformation) based on its density viscuosity, which is a process that uses time. As a result, when contact is made by some large and surface (like the belly), water might not have time to deform and columns of water can get trapped beneath the surface temporarily exerting back force to the body following the action-reaction law.

Consequently, the less surface you use and the lower altitude (thus slower diving) you jump from, the less probability you have to get hurt by diving in, as water gets enough time to deform and make its way out. The viscuosity of water is the property that counters its incompressibility (reciprocal to its elasticity) so that you can dive in without pain.

As others have pointed out, water isnt very different from solids in terms of its resistance to changes in volume; but the defining difference between a liquid and a solid, lies in its resistance to 'shear', or a force trying to slide different parts of the medium past one another. Solids resist shear, whereas liquids do not (at most they resist shear-rate; but by definition their resistance to slowly applied shear forces should tend to zero).

However, liquids do resist shear-rate. And moreover, moving them out of the way of a diver requires acceleration, which also requires force applied to the fluid. So the faster one goes, the less important the resistance to static shear forces actually become, and the more important viscous and inertial forces become.

As a matter of fact, when reasoning about things like interplanetary collisions and the like, or even kinetic-energy-based tank round impacts, it usually matters little if one imagines one is hitting a liquid or a solid; the resulting contact forces will be dominated either way by the pressures required to 'get the stuff to accelerate out of the way'; how the intermolecular bonds feel about the whole thing is less significant, and the density is the most important determinant of how things unfold.

So while water at realistic diving speeds can be quite mean, as you build up the pressure required for the water to shear/flow out away from under you, at these velocities its still nothing like hitting concrete. First of all concrete is about three times more dense so even if it were still liquid you should much prefer the water; but you diving onto the concrete isnt sufficient to render its shear strength insignificant, as evidenced by the fact that the concrete most likely does keep its shape, or something close to it, whereas the water would not.

One can also imagine scenarios where shear-rate is the dominant factor. If you fall onto a bath of pitch, even though its a liquid that will fully comply to an applied shear force given enough time, it will be much the same experience as hitting a solid block of the same density, as its extreme resistance to shear rates will have much the same effect as a persistent intermolecular bond, on the short timescales that govern your impact. The damage to your body would look much the same, regardless of wether its shear-rate or absolute shear resistance of the medium, that brings you to a stop over a distance of fractions of a millimeter. The trajectory that your body is contorted into to satisfy the balance of all forces, is sufficient to define its fate, regardless of the mechanism that gets your there.

Basically, you do experience an impact when you hit the free surface of a liquid (which could be very substantial), but the water moves out of the way so it's not like hitting concrete.

When a solid object impacts on the surface of a liquid, extremely high pressure develops at the site of contact. If you're interested, von Kármán and Wagner did classical work on deriving the inertial forces due to a solid body hitting a free liquid surface.

Von Kármán showed that the pressure on the bottom surface of the impacting body approaches infinity for flat impacts.

A more recent relevant study which I found which builds on the classical work:

If water is treated as incompressible it has constant volume, but being a fluid it can change shape. The less the viscosity the easier it is to change its shape.

I don't quite understand the question, but isn't it:

Because water is a fluid and ground is not.

Falling with 100m/s on water might be much the same as falling on ground, but when diving, then your speed is very slow and water just flows around.

Try this in a pool or bucket of water or whatever: Slap the water with your open palm. OUCH ! BELLY FLOP Stab the water with your outstretched fingers, blade-like they go right in like an Acapulco cliff diver. Now punch the water. ouch, kind of. A cannonball dive. not a stab, not a flop. It is all about the distribution of force across the waters surface x the surface area of contact.

It can also be viewed in acceleration terms, a sufficiently accelerated water still will pass through a concrete wall, neatly

Not the answer you're looking for? Browse other questions tagged classical-mechanics fluid-dynamics collision elasticity liquid-state or ask your own question.

2
Kinetic energy loss when a rigid body falls into water
47
Explaining to a five year old - why don't bubbles run like water
0
Momentum equation in collision of a particle and a droplet
1
Jumping into a Pool While Wearing a Superhydrophobic Diving Suit.....What Happens?
0
Why is gas (air) not used instead of liquid (water) in pumps like hydraulic pumps?
1
Mechanically compressing a biological cell using solid weight vs water weight
4
Why does air get trapped below water pouring into a glass?
1
Why does water spread when thrown?