What happens if ONLY one terminal of a cell is connected to a piece of conducting wire?

I've learned that current will flow to bring the potential of both ends of a wire to the same value if there is a difference in potential between them.

Consider a cell of emf,

, and negligible internal resistence.Then, suppose I connect one end conducting wire of negligible resistence to the positive terminal of the battery while leaving the other end free.This would create a potential difference accross the ends of the wire(initial potential at the ends is equal to zero).

IS THE CURRENT (flow of charge) GOING TO FLOW (with charge entering cell)?

WHAT I THOUGHT WOULD HAPPEN:

My understanding is that the positive terminal will attract electrons, and as electrons move from the wire to the terminal, the potential of that terminal will decrease ( this flow is happening since the terminal is in contact with the wire  and so electron can get on the termminal).

I'm unsure of what happen next.I believe that until a static condition is reached, this process will continue.

Was my thinking correct?

Would something like this actually occur? If it does, won't disconnecting the wire after sometime change the emf of the cell?

Note--- I believe I must be mistaken after giving it some additional thought, but what is correct in that case?

I simply want to know what is actually going on and what function the cell's EMF and chemical reaction are performing.

I would value a thoughtful response that could help me figure things out.

Consider a cell of emf $\epsilon$, and negligible internal resistence.Then, suppose I connect one end conducting wire of negligible resistence to the positive terminal of the battery while leaving the other end free.

This sort of circuit may seem difficult to analyze, but it is actually rather easy. What you describe is the following circuit: 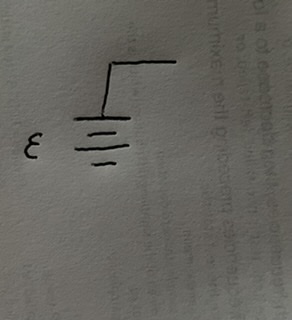 This circuit doesn’t look correct because it isn’t a closed loop. The key is to remember that every conductor has a stray (aka parasitic) capacitance. This is the conductor’s capacitance with ground. It is unavoidable and based on the geometry of the conductor.

In many circuits this stray capacitance is so small that we neglect it. However, for “free” conductors it is non-negligible. Adding them in transforms your circuit to this one: 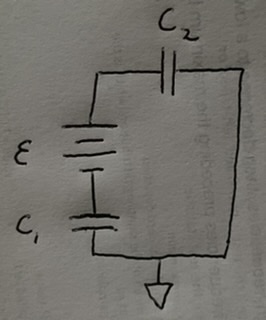 By the way, the current stops as soon as the capacitors finish charging. Since there is no resistance this happens instantly. Realistically there is some internal resistance and the capacitance with this resistance will form a time constant that will determine how quickly it charges.

Usually by "current", we're talking about large-scale, steady-state bulk flows of charge. These are easy to analyze with concepts like Ohm's law and others.

But transitory charge movement may exist as well. But this will sometimes not be characterized as "current".

You're correct, the non-zero capacitance of the wire means that some amount of charge may need to move to bring the wire and the cell terminal to the same potential. But this will be tiny and is usually ignored.

Remember it's not like either side of the cell has a defined potential. The cell just makes sure they have a difference. If we ground one of the terminals, then the cell will move some (tiny) charge to make the other terminal be the correct offset potential.

Once the other terminal is at the correct offset, the cell won't be able to move any more charge.

3
How the current moves in the battery and outside the battery?
1
Is there even a slight transient current when a piece of wire is connected to a single terminal of a cell?
6
Do battery electrons only move if there is a positive terminal at the end of the wire?
0
How cell drives electrons to flow in a metal wire?
0
Would there be a potential difference across a cell connected with just a wire in complete circuit?
1
Why is the potential in conducting wire of negligible resistance is same as the potential of the terminal of the battery to which it is connected?
1
What happens if two capacitors having different charges is connected in series?
0
Does an open circuit have electrons accumulate in it?