Does something like Pascal's Law apply in a Swimming Pool? If not, how does pressure spread?

I've been trying to wrap my head what happens when a force is exerted on the surface of a swimming pool / pond, or underneath it. Examples include a small boy cannon-balling into the deep end, or a fish flipping its tail under water. I assume the water is contained on all sides except the top.

Pascal's Law (as I understand it) suggests that if something like this were done to a closed system, the pressure of events like these would be equalized throughout the whole system instantaneously (or effectively instantaneously, for small enough systems), applying everywhere in the fluid immediately afterward. This may be wrong, but my understanding is that for a fish in a pipe full of water, closed on one end, and plugged with a piston-n-spring on the other, when it pushes with its tail it moves the full column of water between it and the piston to move; it effectively pushes on the piston at a distance, nearly instantly, moving forward as the piston moves back.

Now, what happens in the swimming pool? I assume the fish is not pushing a column of water to push off against a far wall behind it. What does the pressure gradient look like shortly after these events when they occur in a pool, or the water flow? Does the fish actually push water everywhere in the pool, or just in a tight locality around itself, or some combination? Does the cannonballer raise the pool water height a little bit everywhere all at once, the splash and wave a separate effect? I assume these are not the case, and that some sort of pressure gradient spreads out from the events, accelerating water and leading to flow; but I don't understand how fast this happens, or in what directions, or with what fall off. And at least somewhere in my head, it seems like pressure could move throughout the pool very quickly - limited by the speed of sound in water right?

Despite knowing little physics and calculus I'm hoping to program an approximating 2D simulation. Navier Stokes is destroying me; pictures of computed vector fields for similar examples - especially in time sequence - would be a holy grail for me at this point (all I can find is stuff related to Stokes Waves on Wikipedia, which assumes the system is already in a steady state). Otherwise something like hints towards specific computation at the level of a high school education would be appreciated. All answers welcome though, as I suspect even my basics may be wrong. 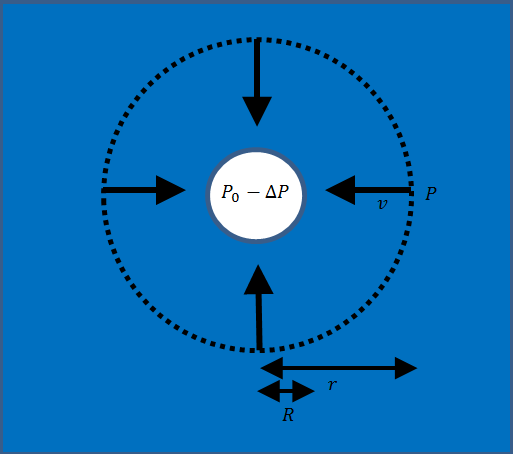 Let's say somewhere in the water far from the surfaces, suddenly a cavitation bubble of radius $R$ with pressure $P_0-\Delta P$ is produced. Where $P_0$ is the atmospheric pressure, let's assume that the scale of the system we are playing with is small enough that the pressure of undisturbed water anywhere is equal to the atmospheric pressure. Because of the pressure drop, water will start moving radially to fill the bubble as shown in the picture. If the flow is continue and laminar then we have the following flux relation

Because $v=0$ at a point far from the bubble. Boundary condition at $r=R$ gives

As expected $r\rightarrow \infty$, $P(r)\rightarrow P_0$. Thus the pressure change fades away as we go farther from the source of disturbance.

In a more general case where the above assumptions still hold, the velocity profile of the flow equivalent to our eq.(1) is quite complicated. Eq. (1) can be replaced with a general flux equation which holds along a streamline

Where $A$ is the cross sectional area of a streamline portion. A typical flow's streamlines caused by a moving object look like this 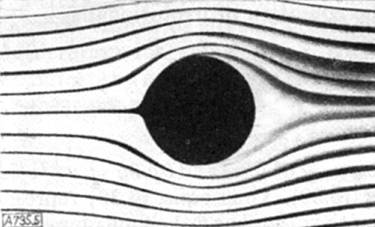 Not the answer you're looking for? Browse other questions tagged fluid-dynamics water fluid-statics or ask your own question.

9
Water under high pressure
3
Force required to move a fluid out of piston at depth
4
Physics of the inverted bottle dispenser
2
How much energy needed to push a volume of water?
1
Mechanical Pressure vs. Thermodynamic Pressure
2
What is the explanation of Pascal's law at molecular level?
1
Question about the difference between a tsunami caused by a meteorite and one caused by an under water earthquake
6
Pressure in giant ball of water floating in space