Edit to clarify: By slight perturbation, I mean that the object begins rotating about an axis that is ever so slightly tilted from its intermediate axis. There is no torque at any point during the simulation. What I mean by angular momentum not being conserved is this: Let's say the intermediate axis is initially along the y-axis. Then $\omega_y$ is on the order of 1, while $\omega_x$ and $\omega_z$ are on the order of 1e-5. Likewise, $L_x=I_x\omega_x$ and $L_z=I_z\omega_z$ are tiny compared to $L_y$. Yet, at fixed intervals, the object will rapidly flip its orientation. After the flip, angular momentum is the same as before, yet during the flip, the object must rotate about the x and/or z axes with high $\omega_x$ and/or $\omega_z$. This has been observed in experiments and computer simulations and is the part that I believe violates angular momentum conservation, not its rotation after the flip.

The angular and linear momenta are both conserved. This is the reason why a stable rotation about a non-easy and non-hard axis is not possible.

A continuous rotation about any other axis requires periodic torque to be maintained.

This is because when a body spins about such an axis, its angular moment will be not aligned with its rotation axis. As a result, the rotational axis will precess around the angular momentum vector.

This short clip nicely demonstrates this behavior for a rotational axis that is almost along the intermediate axis. The body reverses its own sense of rotation, but it also flips over at the same time, conserving its angular momentum.

First off: recommendation of the following two resources:


The video by David Brown is particularly clarifying.

David Brown has set up simulation of the most symmetric case where there are still three different moments of inertia: 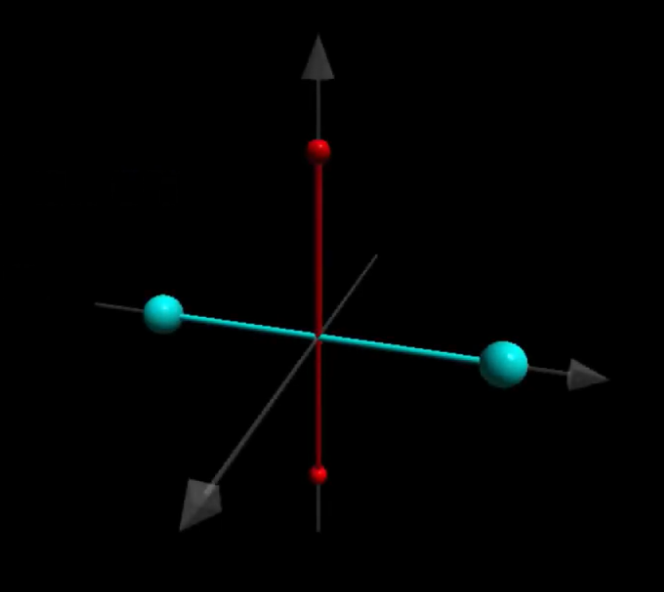 
The implementation of the simulation makes the following clear: when the object is rotating there are internal stresses. If the struts would be flexible they would flex, dissipating kinetic energy. (In the equations for the simulation the object is for simplicity treated as perfectly rigid, of course.) 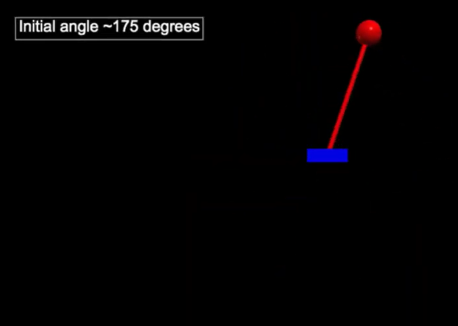 Pendulum with a rigid rod

David Brown offers the following comparison: a pendulum with a rigid rod. When the pendulum amplitude is very small the motion is to a close approximation harmonic oscillation. The motion pattern of an asymetric top that is rotating just slightly off the axis of smallest/largest moment of inertia looks like just a slight wobble, analogous to a pendulum swinging with small amplitude.

In the case of the asymmetric top:
Setting up the initial rotation state very close to the axis of intermediate moment of inertia is like the case of releasing an inverted pendulum from close to completely inverted.

Angular velocity around the axis of largest moment of inertia has the masses furthest away from the center of rotation. So: for the same angular momentum the rotation rate will be the slowest.

The initial state of rotation being close to the intermediate moment of inertia is in a sense a maxed out state.

There is an end state such that all the kinetic energy that can dissipate has dissipated. That end state is rotation around the axis of largest moment of inertia. (There is still kinetic energy at that point, but it has no opportunity to dissipate.)

The intermediate axis theorem only states that this rotation is unstable, i.e., IF there is a perturbation, the axis will become another. The perturbation produces a slight non-conservation of angular momentum (it will be produced by an external force and, therefore, we do not expect strict conservation in that situation).

Given an object that has axes with three different moments of inertia $I_1 < I_2 < I_3$, and no way dissipate rotational energy :

If you initiate a spin around the axis with the largest moment of inertia, then you have provided AM and Energy that meets $L^2/E = 2I_3$ . This ratio is too high to transfer any momentum or energy to an axis with a lower ratio, while conserving both.

If you initiate a spin around the axis with the smallest moment of inertia, then you have provided AM and Energy that meets $L^2/E = 2I_1$ . This ratio is too low to transfer any momentum or energy to an axis with a higher ratio, while conserving both.

But if you initiate 99% $I_2$, and 1% $I_3$, then you have provided AM and Energy with an intermediate ratio. The object can find endless combinations of $I_1, I_2, I_3$ that can satisfy conservation of AM and Energy. It is free to follow whatever path $\vec F=m\vec a$ takes .

It is nearly impossible to set up a purely intermediate axis spin, and it can transfer to $I_1$ and $I_3$ simultaneously, thus the transfer, thus the flip. Conserved all the way, always.