(I presume you mean resolution.)

In an SEM, the limit to resolution is almost always determined by the volume over which the electron beam interacts with the sample. If you shoot a beam into a sample at several keV, electrons will bounce around within a volume of something like a micron in size (depending on the exact voltage, the density and shape of the sample, etc.) We call this the excitation volume. Right where the beam hits, a large number of low energy electrons (secondary electrons) are generated. Since those electrons have an energy of a few tens of eV, they don't come from more than a few nm deep. Of course, secondary electrons are generated from throughout the entire excitation volume, but most of those are trapped within the sample and carried away to ground since the penetration of a low energy electron through a solid is poor. Therefore, your resolution is pretty close to the diameter of the incident beam.

Backscatter electrons by definition are collide elastically, so if your beam is something like 20 keV, then the backscatter electrons will be 20 keV too. This means they can exit the sample from deeper in the excitation volume compared to secondary electrons. Now actually, a backscatter detector sees all the electrons with more than a keV or two of energy. So there are a large number of incident electrons which give up some small amount of energy to electron-sample interactions, and THEN backscatter. In real life, a backscatter detector has a large amount of signal from inelastic electrons which are nevertheless close to the incident beam's energy. These, of course, come from a much larger volume since they are higher energy and less likely to be trapped in the sample even when emitted from a greater depth.

Therefore, practically speaking, backscatter resolution is always worse than secondary resolution. On the other hand, often backscatter sees contrast that secondary cannot see at all.

Theoretically, backscatter could produce the same resolution as secondary: imagine a graphene sheet...

That is right; the secondary electrons are created in an inelastic scattering. However, a BSE can be created in an inelastic scattering, as well. The definition is based on their energy indeed. That is why, in a text book you see a broader energy spectrum for BSEs than SEs. For example, Low Voltage Electron Microscopy— Principles and Applications by David C. Bell & Natasha Erdman 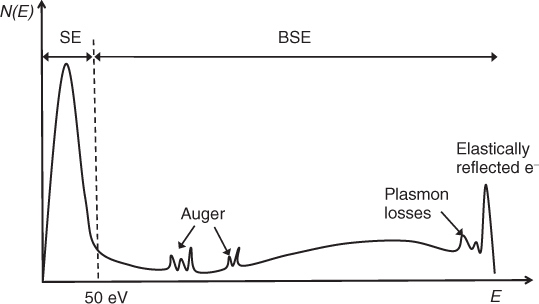 The conventional definition is:

According to the conventional definition, SE detector collects only electrons < 50 eV and BSE detector collects electrons > 50 eV. From this point of view, it is very hard to get the same (or same) topographical resolution from both SE and BSE if the operating energies are much higher than 50 eV.

However, lately, more sophisticated detection mechanism has emerged such as low-loss energy spectroscopy.(See: Villarrubia, 2016). In short, the detectors are collecting only elastically reflected BSE (the peak at the most right hand side of the energy spectrum). There is another key parameter for this electrons: 'scattering angle'. They interact with atom elastically and with very high angle (means returning back where it came from). The later is related with the position of low-loss electron detector, which is located inside the column. So, you can get very high topographical resolution because these electrons interacted with the material with a very limited range.

Therefore, you can get same or even better resolution with (low-loss) BSE.

Not the answer you're looking for? Browse other questions tagged experimental-physics visible-light microscopy or ask your own question.