I have a doubt as to in which frame of reference the Schrödinger equation is written? I think it is inertial but can't reason it out.

I'd like to add to Michael Brown's comment that "You can write Schrödinger's equation in any frame you like": it is quite literally true and Schrödinger's equation has a meaning that is far more basic than frames of reference and so forth. As Trimok and Michael Brown say, Schrödinger's equation for certain physical systems does depend on frame if indeed transformation between reference frames makes sense for the physical system under consideration, but its fundamental "shape" is always the same as discussed below. Actually, one has to specify quite a bewildering gathering of information about the scenario one is doing quantum mechanics in to give a full description - "pictures" (whether "Schrödinger" or "Heisenberg or "Interaction" or otherwise), "coordinates" or "space" (whether "position" or "momentum" and so forth), and, if it is even at all relevant, the frame of reference in that space. This information is not always altogether clear from a discussion and specifications can be sloppy (especially, sadly, in some elementary texts) so your question is a good one.

Schrödinger's equation is simply the first order differential equation describing the time evolution of a "vector", representing the state of the quantum system, in some Hilbert space. That state can represent anything, it doesn't have to have anything to do with positions or motions in space. For example, if I want to make a quantum model of an inductor-capacitor resonant circuit, I would end up describing the system's state as a discrete sequence of complex numbers $\Psi = \{\psi_0, \psi_1, \cdots\}$, such that $\sum_j |\psi_j|^2 = 1$. $\psi_0$ is the probability amplitude that the system is in its quantum ground state, i.e. as close as one can get to "unenergised" without violating the Heisenberg inequality, $\psi_1$ the probability amplitude that the oscillator is in a one photon state, i.e. its energy is $\frac{\hbar}{\sqrt{L\,C}}$, $\psi_2$ the amplitude that it is two photon state, and in general $\psi_N$ the attitude that is in an $N$-photon state; or, if you like, the amplitude that it has had $N$-photons added to its ground state from somewhere outside the oscillator system. In this quantised resonant circuit, spatial positions are irrelevant. "Frame of reference" has no meaning here. Naturally here the inductance and capacitance are respectively $L$ and $C$.

The Schrödinger equation is very general: it simply says that a quantum system's makeup and working is in some sense "constant" when the system is sundered from the rest of the World. This vague statement makes more sense in symbols: the mathematical description has to be invariant with respect to time shifts: if I begin with a quantum state at 12 o'clock and evolve it until 1 o'clock, then my state evolution is going to be the same as if I began with the same state at 4 o'clock and waited until five. Now, we assume linearity, so that our state vector (now written as a column vector) is going to evolve following some matrix equation: $\psi(t) = U(t) \psi(0)$, where state transition matrix $U(t)$ must:

which is the Schrödinger equation (see footnote about the mysterious constants $\hbar$ and $i$). Hopefully the Schrödinger's equation's essential nature should now be clear:

The Schrödinger equation for a quantum system asserts the system's time shift invariance when that system is sundered from the rest of the World.

Schrödinger's equation is not the only way to make the above assertion of time shift invariance, which leads me to the discussion of "pictures", sometimes, highly unhelpfully, called "frames" or "frameworks". What you might be thinking about when you say "frame" is that sometimes it is easier to analyse a system's evolution in what is called the Heisenberg picture. In quantum mechanics the only "real" things are measurements, represented by observables, which are Hermitian matrices (operators). So the only "real" quantities are the moments of the probability distribution for the measured quantity: if the quantity is measured by an observable $\hat{M}$ then the nth moment of the probability distribution for the value of that measurement when the system state is $\psi$ is $\psi^\dagger \hat{M}^n\psi$ in matrix notation, or in bra-ket notation $\left<\psi|\hat{M}^n|\psi\right>$. One can think of a system's state being constant when the system is isolated and of the observables themselves evolving in time. Since only the measurements matter this is altogether acceptable as long as the values of measurements don't change: the measurement evolves with first-time derivative $\mathrm{d}_t\left<\psi|\hat{M}^n|\psi\right>$ and, if we use Leibniz's rule and plug in the time evolution of $\psi$ described by the Schrödinger equation we get:

You can now see that the measurements will evolve exactly the same way as they would if the system evolved as described by Schrödinger's equation if we think of the state $\psi$ as constant and if the observables instead evolve following:

This is the equation of motion for an observable in the Heisenberg picture ("frame"). I'm pretty sure somewhere Feynman say the Heisenberg picture is like doing quantum mechanics in a rotating frame in his lecture series. He is of course being metaphorical. Also note that, because we want the Heisenberg equation to hold for any observable, its form is very constrained. In particular, the operation on the right has to be a derivation (something which fulfils the Leibnitz product rule, which the Lie bracket is) so that if observables $\hat{A}$ and $\hat{B}$ fulfill the Heisenberg equation, so too do $\hat{A}^n$, $\hat{B}^n$ and $i [\hat{A}, \hat{B}]$, which can also be (Hermitian) observables.

Now if you're thinking position observables, then when one solves the Schrödinger equation for, say the hydrogen atom, one always sits in a frame stationery relative to the hydrogen atom. Inertial forces are often taken to be utterly negligible if such a small system happens to be accelerating but see the paper that @Trimok has cited.

From especially the Heisenberg equation, one can readily see that any observable that commutes with the constant matrix $\hat{H}$ defines an observable whose measurements are constant with time. So $\hat{H}$ is hypothesised to be the energy observable, since in classical physics energy is the conserved "current" corresponding, by Noether's theorem, to invariance with respect to time shifts.

The Stone-von Neumann theorem has more to say about the unitary equivalence between the Heisenberg and Schrödinger pictures.

For the sake of completeness, and to give an idea for how many possibilities there are for the Schrödinger equation, Let's go back to our inductor-capacitor resonant circuit example (I've taken this unwonted but delightfully simple example of a system to quantise from a little known book by Dietrich Marcuse (formerly of Bell Labs), "Engineering Quantum Electrodynamics"). This is, of course, deliberately chosen as a physical system which spatial "frame of reference" has no meaning for. 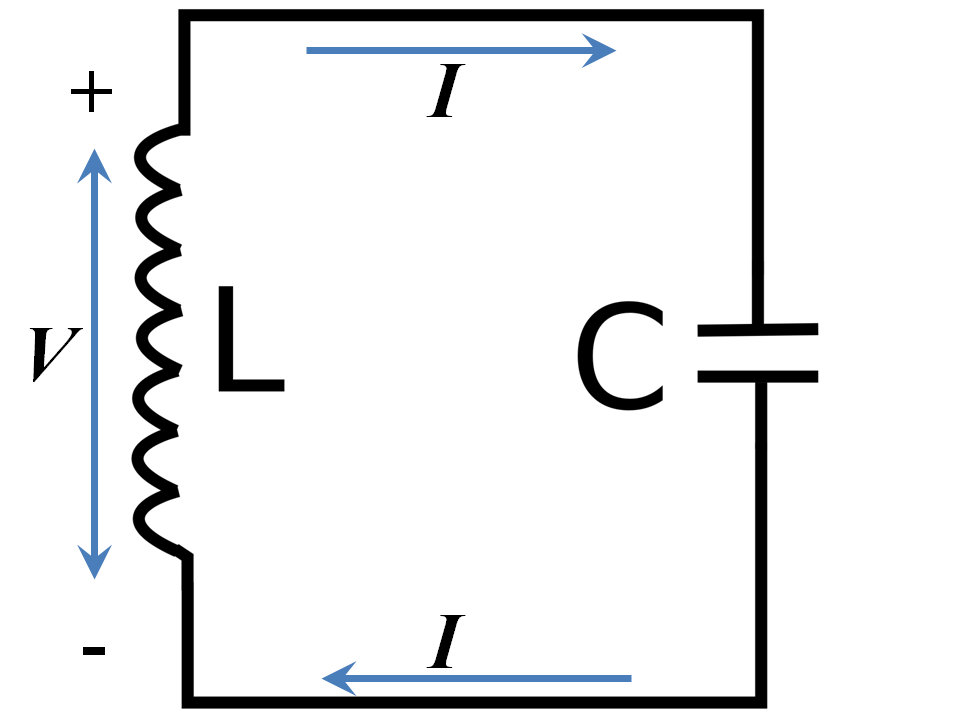 For the voltage and current sign conventions shown in the drawing of our LC Tank circuit, the classical equations of state evolution are:

which are wholly analogous to those for an oscillating mass $m$ on a spring with spring constant $k = m\,\omega_0^2$:

when $x$ and $p$ stand for the mass's linear position and momentum, respectively. Here $H$ is the classical Hamiltonian (total energy). To cut a long story short, we can quantise this system were transferring known results for the quantum harmonic oscillator. In energy or, equivalently, photon number co-ordinates the system's state is the normalized discrete $\ell^2$ sequence $\Psi = \{\psi_0, \psi_1, \cdots\}$ I talked about at the beginning, with the interpretation that $\psi_n$ is the probability amplitude that the system has been raised by $n$ equal energy quantums $\hbar\,\omega_0$ from the ground state. Schrödinger's equation is defined as above with the countably infinite square matrix $\hat{H} =\frac{\hbar\,\omega_0}{2} I + \hbar\,\omega_0\,\mathrm{diag}\left(0,\,1,\,2,\,3,\,\cdots\right)$ where here $I$ stands for the identity operator and $\omega_0 = \frac{1}{\sqrt{L\,C}}$. The two conjugate (i.e. fulfilling the canonical commutation relationships) observables, which represent in the sense talked about above, physical measurements on the system are the voltage and current observables, respectively:

and the canonical commutation relationship is:

In these energy co-ordinates the state vector is a discrete sequence, all the observables are discrete (albeit infinite) matrices and the Schrödinger equation's solution is quite straightforward, to wit:

One can define the quantum harmonic oscillator and its observables to be a quantum system with two observables that (i) fulfil a canonical commutation relationship and (ii) yield measurements with time-harmonic expected (mean) values. One can, with a little work, prove that this definition uniquely defines the quantum system to within the energy spacing $\hbar\,\omega_0$ between its evenly spaced, discrete energy spectrum (the fact of a discrete, evenly spaced spectrum also follows from the definition just given and does not have to be assumed). The spectrums of the conjugate voltage and current variables are both continuous, and now one can do the Dirac "ladder operator procedure" backwards and find a co-ordinate system where the voltage observable takes the simple form $\hat{V} \Psi(v, \,t) = v\, \Psi(v,\,t)$ and current observable is $\hat{I} \Psi(v, \,t)= -i\,\frac{\hbar}{L\,C}\,\partial_v \Psi(v,\,t)$. This procedure is actually not trivial (well not for me, at least) and the answer is that the Hamiltonian is now the a more complicated, but more wonted, continuous operator and the full Schrödinger equation is now:

$\Psi(\iota, \,t)$ is now the probability amplitude of measuring current $\iota$ through the tank circuit at time $t$. As you can see from the above, simple example wherein space and time reference frames have no relevance, one can use a vast number of different co-ordinate systems for the Schrödinger equation.

I say more about the uniqueness theorem just cited and the backwards Dirac latter procedure in the reference Journal Optical Society of America B/Vol. 24, No. 4/ April 2007 p 928.

Footnote on constants in Schrödinger's equation: For the purposes of this answer, one can just think of the mysterious constant $\hbar$ is just some arbitrary constant I've pulled out of the constant matrix - it also keeps the exponential's argument dimensionless by having $[\hbar] = J\,s$ as its SI units because it turns out that $\hat{H}$ has units of energy. $i$ is also kind of arbitrary: it makes observables (see below) Hermitian, rather than skew-Hermitian and makes the measurements derived from those observables real rather than purely imaginary, as they would be if the observables were skew-Hermitian, as would seem most natural to many mathematicians thinking about observables belonging to the Lie algebra of the group of unitary state transition matrices. But, in (somewhat awkward) principle, $i$ could be dropped, and the unit system can be redefined to make $\hbar = 1$ (the latter is done in practice in "Planck" units).

Not the answer you're looking for? Browse other questions tagged quantum-mechanics schroedinger-equation reference-frames or ask your own question.

6
Heisenberg picture of QM as a result of Hamilton formalism
5
Waveguides and Maxwell's Equations
5
Energy of an EM wave compared to energy of a photon
2
Can current and voltage be linked by an uncertainty relation when electrons tunnel through a barrier?