When we say inertia is the quality of matter to resist changes in velocity, in what way does it 'resist'?

Until today I used to understand and explain anyone the concept of inertia in the following way, but I found a loophole in that explanation.

Explanation : Imagine we take a body in space where there is no resistance from the air or any solid surface. Initially, that body is at rest. I apply a force F to it trying to change its velocity. As I do that, I feel some resistance as if the body applies a force on me as well. This happens with every body that I take and apply a force on. Every time, I feel a resistance in the form of a force that the body applies to me back. So I postulate that, okay, matter has a quality of resisting any changes in velocity by applying a force back to you. That is what you feel as resistance and this quality of matter is called inertia.

I think that you are confusing inertia and mass.

You made the statement When we say inertia is the quality of matter to resist changes in velocity, . . . . . which is correct but your argument concerns mass which is a measure (ie quantifiable) of the amount of inertia a body has.

A body remains at rest, or in motion at a constant speed in a straight line, unless acted upon by a force

rather than Newton's third law

If two bodies exert forces on each other, these forces have the same magnitude but opposite directions

One of the best definitions of inertia comes (of course) from Richard Feynman, although he attributes it to his father:

The general principle is that things which are moving tend to keep on moving and things which are standing still tend to stand still, unless you push them hard. This tendency is called 'inertia', but nobody knows why it's true.

Today we might add that we now have a partial understanding of the source of inertia - it comes from the interaction of elementary particles with the Higgs field. However, this only pushes the question back one stage - we do not know why the Higgs field exists or why it acts in the way that it does.

Calling inertia a 'tendency' makes it easier to understand than calling it a 'resistance', as the latter term makes inertia sound active rather than a passive property of objects.

A Way to Think About Inertia

If I insist on applying the same rms force to a heavier mass as in the loophole, then I will have to decrease my amplitude or frequency. I'll still notice a difference in "resistance" because I won't be able to shake the heavier mass as violently.

Lest you think this notion of "how hard it is to shake something" is imprecise or fanciful, here is a video of an astronaut's mass being measured with exactly this principle. If you think about it, something like this is really the only way to take the mass of an astronaut in microgravity. The only other method I could think of would be some kind of accounting of the matter that makes up the astronaut's body (i.e. they have this volume of fat, this volume of protein, this volume of bone, etc. which means they have to have this much mass).

Generally speaking, I don't believe in a strict separation of the terms "inertia" and "mass" since we've already muddied the waters so much with commonly accepted physics terminology. For example, you'll hear people speak of mass as "linear" or "translational" inertia.

the closest analogy to inertia that we have is the phenomenon of inductance.

The standard setup to obtain strong inductance is to roll a conducting wire into a coil. Coiling the wire accumulates the effect.

When current is flowing through a wire there is a magnetic field around the wire. When the wire is looped the magnetic field is strongest inside that loop. A coiled wire has many loops, accumulating the effect.

Take the following setup: A coiled wire, and a source of electromotive power (such as a battery), to start and maintain a current in the wire.

As long as presence of electromotive force in the circuit is kept up the current strength will keep increasing.

Normal wire has a non-zero resistance to current, so when you stop applying an electromotive force the current strength will start decreasing. This change of current strength induces a changing magnetic field that acts in opposition to the change that induced it. The stronger the self-induction of the setup, the stronger the tendency for current to remain flowing when there is no longer an electromotive force.

Circuits with strong self-induction need to be switched with a heavy duty current switch, because the current will tend to arc.

Whatever Inertia may be, it is abundantly clear that Inertia is a responsive phenomenon. In order for Inertia to manifest itself in a forceful way there must be change of velocity.

In order to change the velocity of an object a force is required. The rate of change of velocity is proportional to the applied force.

Your loophole is correct. If we provided the same force these objects would push back with the same amount of force. The result of having more mass is that, given some force, an object will experience less acceleration.

In day to day life it is 'harder' to push on a massive object because it is easier to do a lot of work on a heavy object. As we push on an object it accelerates away from us. If you pushed with all your might on a pingpong ball it will just fly away which would prevent you from doing any more work on it. If you did that for a heavy boulder you could continue pushing it, which makes you perform a lot of work on that boulder, which makes you tired in the process.

Technically, the whole talk of resistance is nonsense. In the absence of other forces (notably friction) if you apply a force to an object for a finite amount of time, its velocity will change. Resistance is futile.

So mass produces resistance to change of velocity under application of force only in the same way that thermal capacity produces resistance to change of temperature under application of heat: it occurs in the denominator of a formula. Whether you put a flame to a straw or to a tank of water, in both cases their temperature will rise, just not by the same amount for a given amount of heat; the change of temperature is basically given by the amount of heat transferred divided by the thermal capacity of the object being heated. So the tank (having greatly larger heat capacity) will require a lot more heat to get a given amount of rise in temperature than the straw does, but to call that resistance to getting warmer is just an anthropomorphic expression. (By the way, it is exaclty the same for electrical resistance.)

On the other hand the opposite force exerted by an object is similar to the cooling down of the flame when heat is transferred from it to an object: it just reflects preservation of momentum in the local interaction (as stated in Newton's third law) like the cooling down reflects the preservation of heat energy in a the local heat exchange. To the first order this has nothing to do with the amount a acceleration respectively rise in temperature achieved by the interaction. It is just that if your goal is to achieve a definite change of velocity before you stop pushing, then you will experience the counter-force for a longer period of time for a large mass, just like the flame will experience cooling from the object for a longer time for the tank than for the straw, if the goal is to heat them up by the same temperature difference.

The best way to visualize inertia is to imagine all the fundamental particles in a mass as individual springs pushing against each other. When you push on one side of a mass, the force will work its way through every individual particle. Each particle also pushes back and when you push harder more springs push back. When pushing at a constant velocity, the springs will eventually expand back to normal as the resistance subsides, leaving the mass with a new velocity. Notice in the image that the mass with five particles would be more resistant than the mass with two particles. 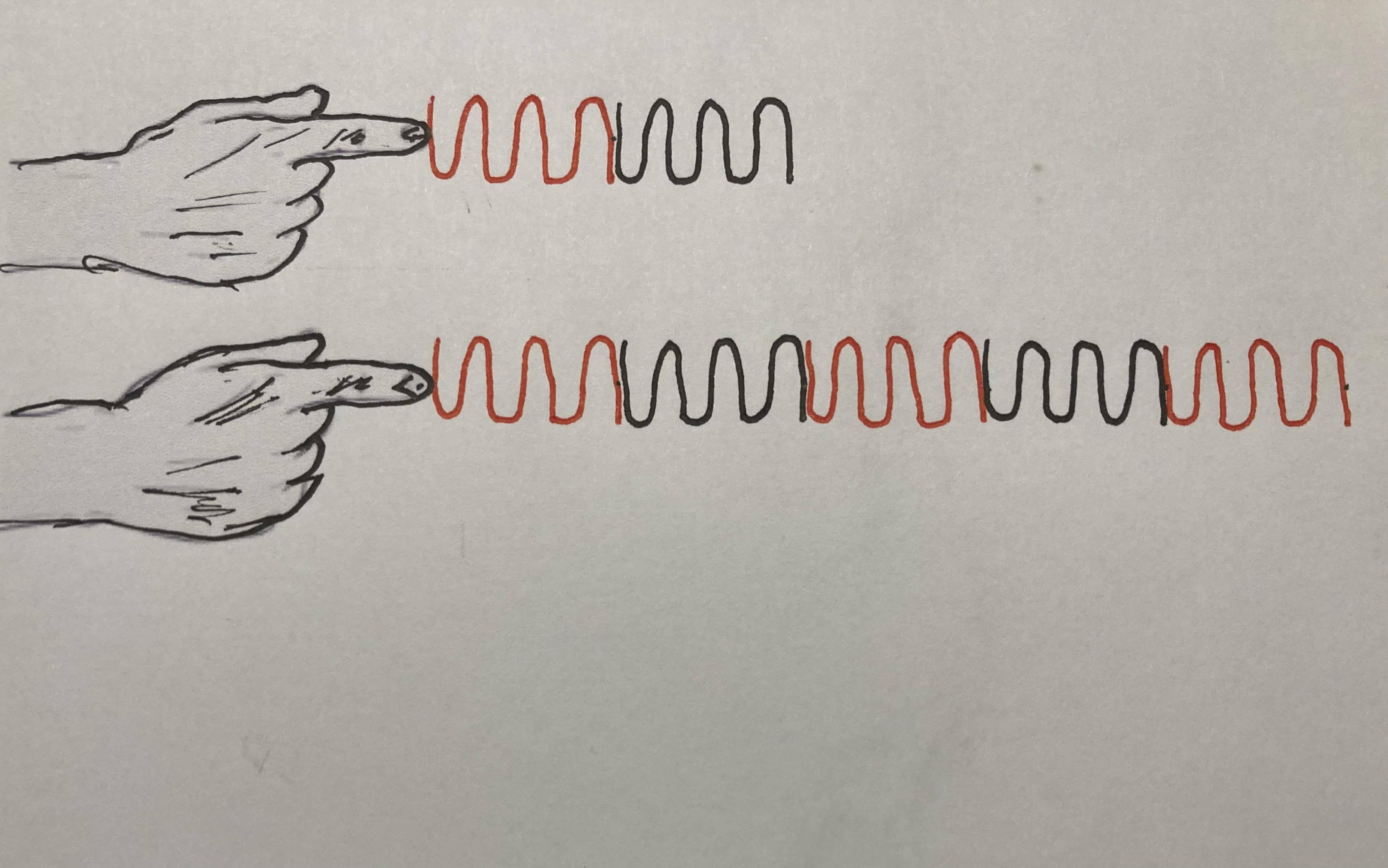 Not the answer you're looking for? Browse other questions tagged newtonian-mechanics mass inertia or ask your own question.

0
Does Inertia really define the resistant ability of a body
2
How do we define $G$s?
2
How does Inertia opposes change in state?
0
Electromagnetic Waves and Inertia