The reason for the choice of time contour is a little more subtle, and you've probably only seen the two most common special cases. Exposure to the general case may clarify what's going on with the imaginary time thing, even if you never use the most general case. The general correlation function (simplifying to a single scalar field) can be written

where the time evolution operators $U(t_i,t_j)$ come from working in the Heisenberg (or interaction) picture and $\rho$ is an arbitrary initial density matrix describing the system at the initial time $t_0$. This is all standard stuff similar to what you'll see in any QFT course.

Here comes a trick (part 1): you can write any density matrix you like as $\mathrm{e}^{-\beta H^M}$. Completely general. $H^M$ is not necessarily the Hamiltonian of your system, though if it is you have a thermal equilibrium state at temperature $\beta^{-1}$. Now the trick (part 2): notice that $\mathrm{e}^{-\beta H^M} = \mathrm{e}^{-i (-i\beta) H^M} = U(t_0 - i\beta, t_0; H^M)$. This is just a trick: imaginary time evolution with "Hamiltonian" $H^M$ gives you a density matrix. If $H^M = H$ this is just a thermal state. If not it's not. The general formalism can cope with the real time dynamics of an arbitrary non-equilibrium state.

Now have a look at page 107 of Stefanucci & van Leeuwen. I reproduce the relevant figure below (I believe it's fair use, but I heartily recommend you read the whole book if you get the chance): 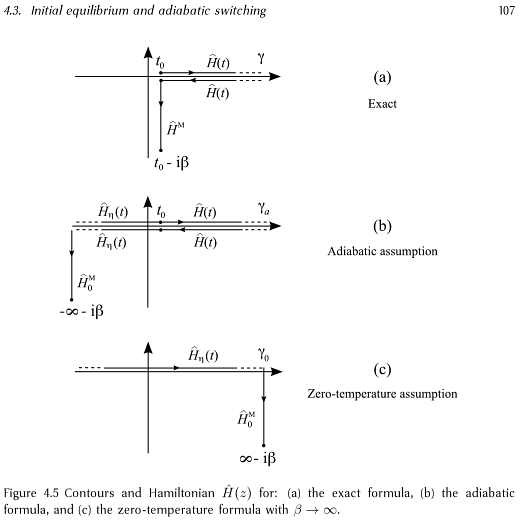 The first figure shows the general situation I've described: the time evolution starts at $t_0$, runs up the real axis to catch any $\phi(x,t)$ operators that are there, then back down to $t_0$ to "meet" the initial density matrix, which we make by evolving down the imaginary axis with $H^M$ which may or may not be $H$.

Now we can make approximations. If all you care about are thermal equilibrium properties and not non-equilibrium time evolution, you can measure all thermal correlations by taking all times at the initial time and $H^M=H$. The real time part of the contour collapses and you are just left with the imaginary time contour you know. It's not so much that thermal field theory is defined on an imaginary time contour. It's just that that is what's left when you don't care about anything else.

On the other hand you can start with some non-interacting state at $t_0\to -\infty$ and slowly (adiabatically) turn on an interaction and watch what happens. This gives the second set of contours (Fig. b), known as the Schwinger-Keldysh contours and often used for studying nonequilibrium situations like electric currents in nanostructures etc.

Finally if you take the density matrix to be an equilibrium density matrix at zero temperature then you can use the Gell-Mann-Low theorem to remove the backwards time contour completely. This gives you the usual one way real time contour that you probably know from ordinary QFT (Fig. c). This works because a vacuum state at $t\to -\infty$ adiabatically turns into a vacuum state at $t\to +\infty$. In a non-equilibrium situation you can't rely on this and you need the full contour.

Not the answer you're looking for? Browse other questions tagged quantum-field-theory renormalization wick-rotation special-relativity or ask your own question.

17
Applications of the Feynman-Vernon Influence Functional
12
Some conceptual questions on the renormalization group
5
Is it okay to Wick rotate to give the negative of the Euclidean metric? Also, could we make the space-like coordinates imaginary instead?
2
Minkowski spacetime with a twist?
4
Free quantum field theories as fixed points of Wilsonian RG
3
Renormalization in curved spcetime
4
How do you derive a quantum field theory from a spacetime metric?
2
What's wrong with using a vielbein to define Wick rotation?