Could bound and stable clusters of 6 or 8 neutrons be a good candidate for dark matter?

The experiment used to create the tetra-neutron employed the exotic isotope helium-8 which upon bombardment with a proton yielded helium-4 and the tetra-neutron resonance. It is probably unlikely that any similar experiment could be used to create and observe the 6 or 8 neutron cluster states, but my question is whether nature may already have created these states in abundance and could they be the dark matter that has puzzled astrophysicists for such a long time?

Aside from atomic nuclei the only other environment where neutrons exist in such close proximity involve stellar collapse leading to neutron stars and/or black holes. Might these small clusters of neutrons be copiously shed during stellar collapse with sufficient energy to escape the gravitational pull of the collapsing core to form the galactic gas we know as dark matter?

Let’s grant you the existence of one or more stable isotopes of “neutronium,” with atomic mass six or eight, $\rm^6_0n$ or $\rm^8_0n$. Now we need to re-do our calculations for big-bang nucleosynthesis with these new stable states available. From the Particle Data Group we get this summary plot of BBN calculations: 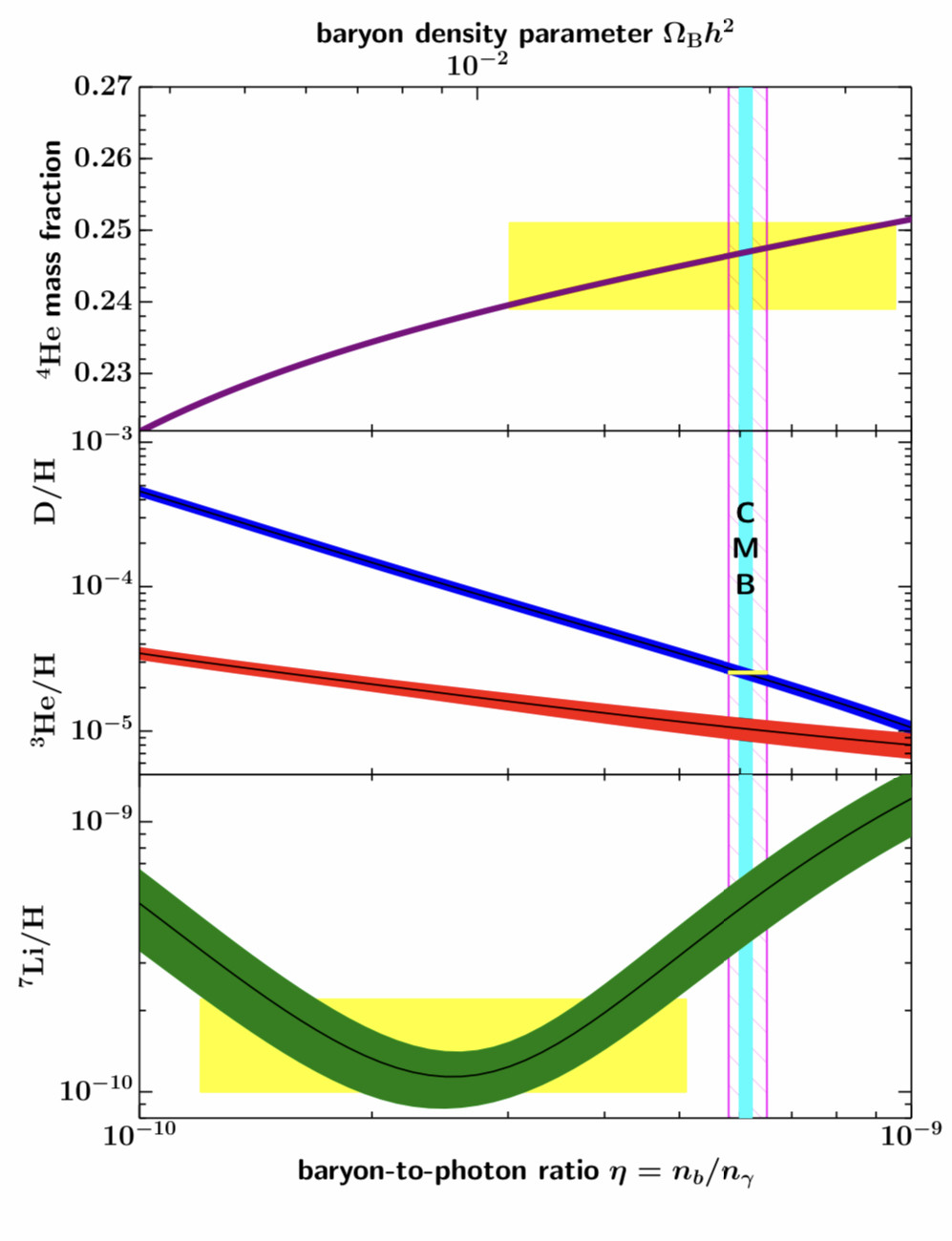 Figure 24.1: The primordial abundances of 4He, D, 3He, and 7Li as predicted by the standard model of Big-Bang nucleosynthesis — the bands show the 95% CL range [50]. Boxes indicate the observed light element abundances. The narrow vertical band indicates the CMB measure of the cosmic baryon density, while the wider band indicates the BBN D+4He concordance range (both at 95% CL).

The major feature of this plot is that more massive nuclei were produced at the Big Bang in smaller numbers than less-massive nuclei. If we added a stable $\rm^6_0n$ or $\rm^8_0n$, we would expect it in the part-per-billion or part-per-trillion range of primordial mass fractions. However, dark matter makes up more of the mass of the universe than ordinary matter, by a factor of about six.

This is separate from the analysis of CMB brightness fluctuations which also indicate that the total non-baryonic matter is about six times more massive than the total baryonic matter.

Furthermore, based on the Milky Way’s dark matter distribution, we expect the local density of dark matter to be about $0.3\,\mathrm{GeV}\,c^{-2}\,\mathrm{cm}^{-3}$. That is a huge density of sexaneutrons or octoneutrons —— much higher than the density of mononeutrons from cosmic-ray spallation, which have observable effects like the continuous replenishment of carbon-14 from atmospheric nitrogen. A stable neutron cluster might be invisible, but it would certainly be strongly-interacting. Thermalized neutronium would induce lots of nuclear reactions as it passed through Earth’s atmosphere and crust.

Such neutron clusters are baryonic matter. However, we know from measurements of the primordial abundances of helium and deuterium and within the context of big-bang nucleosynthesis models, that most of the matter in the universe must be non-baryonic - the primordial abundances show that baryonic matter makes up ony 1/6 of the matter required to explain the dynamics of galaxies and clusters (e.g. Pettini & Cooke 2012). Independently, fitting the angular fluctuations in the otherwise isotropic cosmic microwave background to the same model also shows that baryonic matter makes up only $18.3 \pm 0.5$% of the gravitational matter (Peebles 2015).

Thus dark matter must be predominantly non-baryonic in the context of the big-bang model.

A further property of dark matter is that it should only interact gravitationally. I am sure that would not be the case for nuclei made of neutrons, which could interact with other nuclei and particles and with photons.

Why can't dark matter be baryonic?

Can Dark Matter just be clumps of Neutrons

Might these small clusters of neutrons be copiously shed during stellar collapse with sufficient energy to escape the gravitational pull of the collapsing core to form the galactic gas we know as dark matter?

As far as our observations of the universe and the current model go, dark matter is stable. You are talking of resonances, and resonances decay to their components, so they cannot make up dark matter. See the answers here and here ,that discuss the problem of bound states with neutrons.

Not the answer you're looking for? Browse other questions tagged black-holes nuclear-physics astrophysics dark-matter neutron-stars or ask your own question.

81
Why doesn't a nucleus-like body made up of just neutrons exist?
49
Why isn't dark matter just ordinary matter?
14
Why are the dineutron and diproton unbound?
10
Can Dark Matter just be clumps of Neutrons
2
Why can't dark matter be baryonic?
3
Why is there no stable nucleus with two or more neutrons but no protons?