Is it possible to have a geostationary satellite over the poles?

My understanding of orbital mechanics is very limited, but as I understand geostationary satellite, they stay in place by having an orbital speed corresponding to the spot they're orbiting over.

So my basic intuition tells me that it's not possible to have a geostationary satellite over the poles, since they're effectively standing still, and to my knowledge, a satellite must keep a certain velocity to keep from getting pulled down by gravity.

Your understanding is correct.

There cannot be a geostationary satellite at the poles, basically because it would have to be at rest, which cannot happen as it would get pulled by the earth's gravity and eventually crash to the surface.

In fact, there cannot be a geostationary satellite anywhere else, except above the equator(in an equatorial orbit). This is fairly easy to prove.

Imagine that you wanted a satellite directly above the place where you are right now, lets say 500 km away. Now we know that the earth is rotating, so the place 500 km directly above you will also move in a circle.This circle has its center somewhere on the rotational axis of the earth(Not necessarily coinciding with the center of the earth).

If you want your satellite to move on that path, It will require a centripetal force continuously acting towards that center. Now if a satellite is purely under the influence of earth's gravity, there is a force acting on it directed towards the earth's center. Now if this force were to act as the centripetal force for the motion we want for our satellite, the orbit's center would have to coincide with the earth's center, leading us to the fact that a geostationary orbit has to necessarily be an equatorial orbit!

P.S. I'm sorry I couldn't provide you with a 3D diagram, but Wikipedia has a great diagram for a geostationary orbit:

The accepted answer by udiboy is completely right; however theoretically it is not only gravity that acts on a satellite, but also light pressure from the Sun and Earth. Given a sufficiently light and large solar sail (implausible at the current technological level), it is possible to counteract acceleration due to gravity and enter a totally non-Keplerian orbit above one of the poles. This way the (mega) satellite will always stay illuminated. 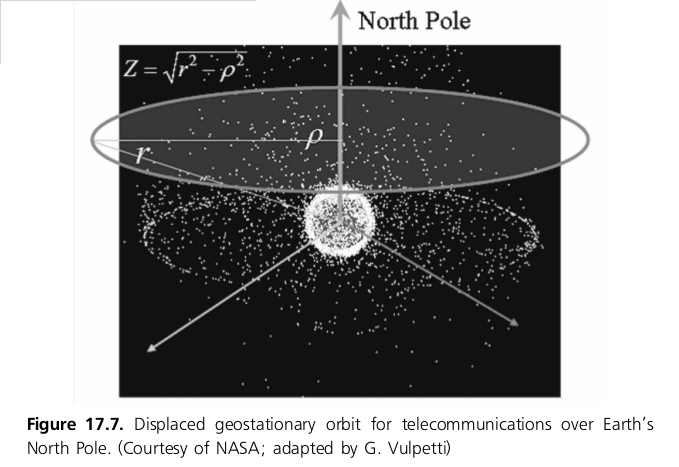 To put things in perspective, a perfectly reflecting sail at 1 AU from the Sun (i.e. near the Earth) gets $9 \frac{N}{km^2}$ from solar pressure (puny nine Newtons per sq.km of surface).

The practical value of such a satellite is limited:

As noted you can't be stationary without a really big solar sail or magic rockets. The usual solution to this problem are orbits with long hang times in view of a pole, specifically the Molniya orbit, commonly used by the Russians with a lot of high-latitude territory. Multiple Molniya satellites can provide very good coverage.

To extend what others have written, the beauty of a satalite in a Clarke Orbit is that once you point your receiver at it, your receiver can stay put. Great for telecommunications.

A satellite in a polar orbit on the other hand, will pass over the entire surface of the Earth in a few orbits. It goes pole-to-pole as the Earth turns under it. Great for spy satellites and geological surveys.

For a satellite to orbit around the Earth, we need to ensure the following:

Geosynchronous orbits also have one sidereal time per orbit but they are not stationary and they are described by a path called "analemma" which is equivalent to an elongated figure of 8.

Not the answer you're looking for? Browse other questions tagged popular-science orbital-motion satellites or ask your own question.

5
Can there be other Positions of Geostationary Satellites?
0
How to take a Picture of Ice in Mars Pole?