I always read that GR does not seem to prevent closed time loops. This does not sound too crazy if you could somehow create a traversable wormhole (and move one of the ends fast and long to make the two ends out of sync in your original reference frame) , which, again, does not seem forbidden by GR. The largest issue that people seem to have with this is the grandfather’s paradox.

I do not have a big problem with the paradox, as any closed time loop needs to be self consistent. My issue is not with free will, but rather that even if you had consistent closed time loops, would not that mean that the future is not predictable from the past? What are the implications of such a causality defect? What kind of predictability/causality could we have in a universe that was filled with wormholes whose ends are randomly separated in time?

An interesting example of this is given by the Polchinski's paradox. Imagine a billiard ball that is thrown towards a wormhole that brings it back a few seconds in the past so that the ball emerges from the other end of the wormhole just at the right time to knock itself out of course, preventing itself from entering the wormhole in the first place. 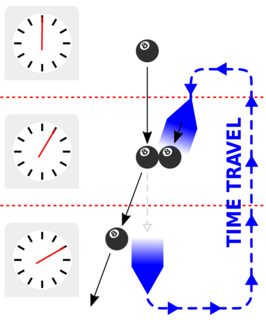 This of course cannot happen in a self-consistent universe. A solution to this paradox was found by Echeverria et al. (1991). They argue that the ball would exit from the wormhole with a trajectory slightly different than expected. It does still hit itself, but it doesn't knock itself totally out of course. Instead, it gives itself just a slight blow. The ball will still enter the wormhole, but with a slightly different trajectory, which is the one previously observed at the exit of the wormhole.

This simple example does not require knowledge of general relativity, but it is interesting to illustrate the fact that allowing CTCs, the future cannot be deterministically predicted from the past. For more information see the Novikov self-consistency principle

I like Prallax's answer, and as a humble geophysicist, all I can contribute is the way I visualize how causality in closed timelike curves works. Buckle in, cause it takes a whole story for me to wrap my mind around it.

Firstly, we're talking Harry Potter book 3 style time travel. As in first, Harry (let's call him Harry1) sees a dementor, and then sees a "mysterious figure" who casts a spell to get rid of the dementor, thus saving Harry1's life. Later, Harry1 uses a timeturner to go back to that moment and becomes that "mysterious figure" (Harry2) who saves Harry1's life. So basically the grandfather paradox is avoided because he saves his own life.

In Harry Potter, this means that we can predict that Harry will go back in time to save his own life, but we can't predict how he will do that. He may use a patronus spell. He may grab Harry1 and disapparate. He may ask Hermione to cast a patronus spell instead. He may cast a patronus spell 3 seconds before the dementor gets to Harry1. He may cast it 3.1 seconds before. Or 3.2 seconds before, or 3.15, or 3.125 etc. He may even sacrifice himself to save Harry1. He can do literally anything (within the laws of his universe) so long as it allows Harry1 to survive long enough to use the timeturner. Ie, there are infinite possibilities for what will happen, but it is a limited infinite. Just like there are infinite numbers on a number line, and infinite positive odd numbers, but the latter is limited infinite, as they exclude even and negative numbers. We have not narrowed Harry's options down to a single possibility, or even a finite set of possibilities, but we have limited the set of possibilities.

We know Harry2 will not go back and stab Harry1 to death. We know Harry2 will not decide to take a nap and forget to stop the dementor. All possibilities that prevent Harry1 from using the timeturner are cancelled. They are physically impossible, and any universe or timeline in which that happens will effectively cease to exist, and we experience them as never having happened in the first place.

From Harry2's perspective, that might feel like "fate" or "God" nudging him in certain directions. Harry2 might really want that nap, and as soon as he falls asleep have a "prophetic" dream telling him to wake the f up and go stop that dementor. He may try to use his free will to ignore that dream, but again him not stopping the dementor is physically impossible. So he may then experience some wierd stuff that sure feels like a "miracle" or "magic" that forces him over to the dementor. That "miracle" will have been a technically possible though normally highly improbable series of coincidences, that was "forced" to occur in order to satisfy the timelike curve. (Or rather, because it is probabilistically possible and does not defy the grandfather paradox; and any other storylines which do not meet those 2 criteria cannot exist, this is the storyline that occurs). And had he just avoided the nap in the first place, there isn't even a need for "miraculous" forcings. That's a free will discussion for another time.

I believe Harry1 will also experience these forcings. He does not have the choice to opt out of using the timeturner, because the loop has effectively already happened. He is already in it. Even the "first time through," he saw the "mysterious figure". From his perspective, time travel has already happened, and he can't get out of that loop. He has to go back and save himself because it already happened.

Entering into a closed timelike curve places limits on what possibilities can unfold in your future, specifically during the loop (the time between Harry2 appearing in that past and when Harry1 uses the timeturner). Just those chapters: 16-22. But as for what happens in chapter 23 or book 4, the possibilities are just as limited as they would normally be. Harry would have only experienced "fate" during the loop. Not before or after. That timeloop exists as a defined event in the past now, just as surely as any other life choice Harry made in book 2 does. It affects the possibilities of the future, just as Harry's deciding to go to Hogwarts affected his life opportunities, but no more or less so than that. If you are starting at book 1, trying to predict the whole series, the fact that a timeloop happens in book 3 is just as predictable as any of the other plot points. It's only within the timeloop that predictions are limited. And since it is a complete loop and doesn't "change the past", it does not add any extra unpredictability or uncertainty to the series as a whole.

In conclusion, within a closed timelike curve we can predict parameters or limits on what will happen, but the specifics have infinite possibilities within those parameters. It would be like being able to know for sure that you are going to live to 92, but having no clue how you die. Or how you live your life for that matter, other than knowing you will be prevented by "fate" from entering a deadly scenario for the next 60 years. It's not even that big a deal to know some parameters of the future, as we already have that. I know for sure I won't live past 200, for example. It's just a different set of parameters. Outside the curve, the possibilities are the same as usual.

Disclaimer: I'm not trying to push any religion into this. The use of "God", "fate" and "miracles" is merely a placeholder, as I don't have the vocabulary to describe these things. You do you in terms of beliefs. Also, I really only have cursory knowledge of timelike curves, haven't been able to work through the proofs or anything myself, so take this with a grain of salt.

"My issue is not with free will, but rather that even if you had consistent closed time loops, would not that mean that the future is not predictable from the past?"

There are a couple of ways you can interpret that. In a classical deterministic universe, the initial state of the universe predicts everything that comes after, including the time loops. Your actions both in the future before travelling back and the past after you have travelled are both caused by the original state of the universe. The only 'cause' in the universe is the prime mover, everything that happens subsequently is all 'effect'. So the future does not cause the past, because both of them are predetermined and required to be consistent by the even earlier past.

If the laws of physics are not only deterministic but also reversible, then it is equally legitimate to start with the final state and work backwards, to earlier times. History is laid out like a jigsaw puzzle. We can start at one end and solve it piece by piece until it is complete, or we can start at the other end and work back to the beginning, or we can even start in the middle and spiral round. Any circular loop we draw through history is a causal chain.

Another way to interpret it is using the so-called 'Many Worlds' quantum universe, in which everything that can happen does happen, all at once. Now history is a branching tree, with decisions being made at every point and all the possible outcomes happening in superposition. If we jump back in time in such a universe, we are very likely to find ourselves on a different branch. We can freely make different decisions, like murdering our grandfather, resulting in a different future outcome, like not being born, and nothing bad happens because we still get born in a parallel universe in which our time-travelling self did not appear.

The 'Many Worlds' universe is also entirely deterministic and predictable. (And also local, reversible, and all its weird aspects already implied and widely accepted in microscopic physics. It simply asserts that the quantum physics that everyone agrees applies to electrons applies at every scale, and points out that - contrary to expectations - pure unmodified unitary quantum evolution already predicts we will see the near-classical universe we actually do. It's a standard behaviour of coupled oscillators, that their states become correlated and an orthogonal superposition of joint eigenstates.) 'Many Worlds' is a somewhat misleading name for it - it is more properly called the Everett Interpretation.

The bit of General Relativity that considers quantum superpositions of Einsteinian geometries in this way was called 'superspace' by John Wheeler (See his book 'Gravitation'). It was an early attempt to develop a theory of quantum gravity, but I don't think it worked out.

39
What does it mean when people say "Physics break down"?
10
How does the non-degeneracy of the metric imply that gravity is not fundamental?

1
Wormholes and the illusion of time?
1
Why do relativistic wormholes have to be brought together to make a "time machine"?
4
Charge without charge and non-traversable wormholes
0
Basic geometry of a wormhole
0
Closed spacelike vs Closed timeline curves (or rather loops)
4
Why can one not traverse a wormhole? Does it decay? Does it take infinite time to reach a wormhole?
0
Does Coordinate time make sense in a universe with wormholes?