Ask Question
Asked 1 month ago
Modified 1 month ago
Viewed 85 times
0
$\begingroup$
Homework-like questions and check-my-work questions are considered off-topic here, particularly when asking about specific computations instead of underlying physics concepts. Homework questions can be on-topic when they are useful to a broader audience. Note that answers to homework questions with complete solutions may be deleted! 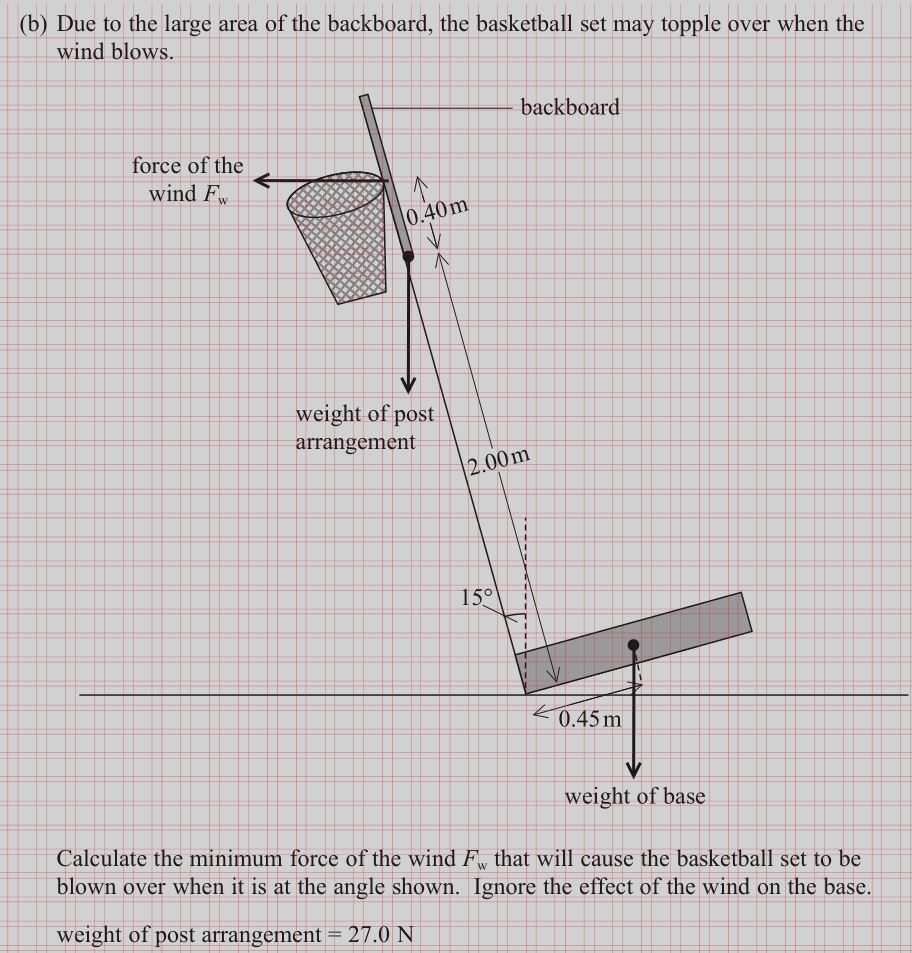 This is embarrassing but I can't seem to solve this problem, even though I know how to resolve forces involved.

The problem should also state "assume the assume the point where the base remains on the floor does not move". Consider the torque to turn the set over, about the fixed point of the base on the floor.

Added in response to OP comments

The points where the forces act determine moment the arms (distance from the fixed point of the base on the floor to a force) of the forces for torque. You need the sin of the angle between the moment arm and the force to determine the torque of each of the three forces.

For example. the torque from the weight of the base is $\vec r \times \vec F_{base}$ which is (0.45)(868) sin(90 -15) clockwise. Similarly figure out the other torques; when total counter-clockwisewise = total clockwise torque the set starts to rotate over.

There is a force acting where the base is fixed on the floor, but it does not contribute to the torque about that point, because of the zero moment arm for this force.

Note torque (and angular momentum) depend on the point about which they are evaluated. Here we use the point where the base stays on the floor so we do not have to evaluate the torque from the force at that point.

where $F$ is the force and $x_{\perp}$ is the perpendicular distance from the acting force to the pivot of it's axis.

Not the answer you're looking for? Browse other questions tagged homework-and-exercises newtonian-mechanics rotational-dynamics angular-momentum torque or ask your own question.

1
Calculating torque with gears and wheel-axles
1
How does the weight of the pendulum's bob cause a torque?
0
Acceleration of two points problem (mathematical explanation)
1
Three Dimensional Torque on a Sphere
1
Torque and Angular Momentum for point particles
0
Torque due to the change in linear momentum
4
High school physics problem - having trouble understanding