Why only the first derivative of the wave function must be continuous?

Let's say we have a piece-wise differentiable periodic potential. For example, like a zigzag. Let's assume that we know eigenvalues and eigenfunctions on each interval, $\Psi_{1, 2}$ on the left and $\Psi_{3, 4}$ on the right. How do we find the general solution? 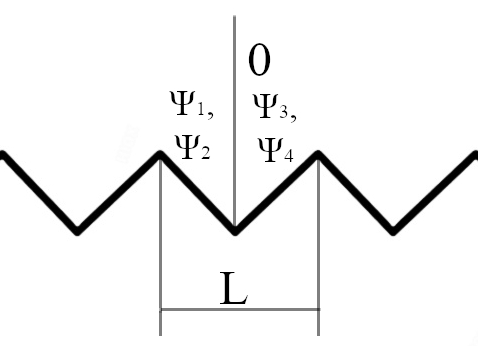 For a periodic array of finite potential wells I would say that the wave function and its derivative must be continuous at the boundaries of each pit, but the second derivative can have discontinuity because the potential has a discontinuity. However, it is not the case for a continuous potential. Do I also require that the second derivatives are equal? But that implies more equations than I have eigenfunctions for a given energy.

In case of a potential like in picture, the functions on the left are

What I should do? Obliviously, the functions are continuous, so

Their derivatives also must be continuous:

But what is my next step? Do I also require second derivatives to be continuous,

But in this case, when I apply Bloch theorem, do I also apply constraints on the function derivatives?

You don't have to enforce the continuity of $\psi''$. The time-independent Schrödinger equation is

Ignoring Bloch's theorem for the moment, my starting point would be to take the time independent Schrödinger equation, $$-{\hbar^2\over2m}{\mathrm d^2\psi\over d x^2} + U(x)\psi(x)= E\psi(x)$$, then I would observe that $U''(x)$ is some sort of Dirac comb. So this means that the second derivative of the Schrödinger equation will have naked $\delta(x-x_0)$ terms in it.

When we have a differential equation that has naked $\delta$-terms in it, we usually soak those up entirely with the highest derivative we are taking, which in this case would be $\psi^{(4)}(x).$ This means that $\psi'''(x)$ will be discontinuous at the edges by a determined amount, but $\psi'',\psi',$ and $\psi$ will all be continuous.

Then we get to the difficult part, which is trying to figure out how Bloch's theorem fits in, and I don't think it alters this basic story, just changes the mass term or something and thereby changes the exact size of the discontinuities, probably.

Not the answer you're looking for? Browse other questions tagged quantum-mechanics wavefunction potential schroedinger-equation mathematics or ask your own question.

1
How to discretize a finite crystal?
16
Bound states of the $V(x)=\pm \delta'^{(n)}(x)$ potential?
2
Laughlin wave function and CFT
0
Minimum energy of a piecewise continuous potential function
1
Continuity of wave function derivative
1
Can I multiply a solution by a complex number to make it real in quantum mechanics?