Suppose I have a massless lever with two masses at the ends and a fixed pivot as depicted below. Assume no gravity in this scenario. 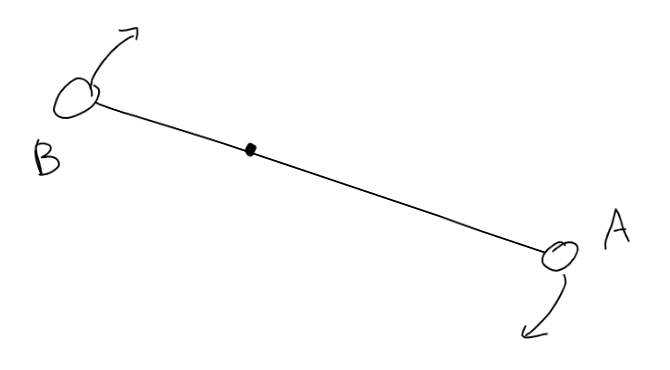 It seems that $B$ received a greater force, yet it is moving with less speed. This seems like an apparent contradiction. Is there a way to resolve this?

I am aware that there is centripetal force that needs to be considered in a thorough analysis. I am assuming the pivot keeps the entire system in place as it rotates.

There are two errors here.

First, $ F_{2} = F_{1}\frac{R}{r} $ is about the balancing of two torques in static equilibrium. That is, the usually case where this holds is where $F_1 R$ is one torque, and $F_2 r$ is the other, and if there's no net torque then they cancel each other out and are equal in value, which produces the equation. But this doesn't generally hold in all circumstances. In fact, the fact that your system would speed up shows that there's definitely a net torque and the equation doesn't hold.

Second, scaling the velocities with the forces, is intuitive, but incorrect. In fact, they usually scale in the other direction, i.e. inversely.

What accelerates object A is not the force $F_1$ that you applied to it, it's the net force that it experiences.

$F_1$ is one component of the net force, but there is also a reaction force from the lever that you need to consider.

Rather than calculate this reaction force, the usual way to solve the problem is to find the moment of inertia of the two joined masses, and the torque you are applying at object A, and from those calculate the angular acceleration of the lever and masses.

If you must know the net force on object A, you can calculate it from its angular acceleration, lever arm, and mass.

Not the answer you're looking for? Browse other questions tagged newtonian-mechanics rotational-dynamics torque rotation angular-velocity or ask your own question.

1
Does a rotating plank only acquire rotational kinetic energy?
1
What causes the mass connected to the end of a pendulum to speed up when its pivot is moved?
0
Hanging an object on a string vs. pulling it
1
Law of the lever - Explained Physically
0
Why isn't the speed of a mass in a vertical loop in a gravitational field constant?
0
Does centripetal force remain the same if the radius increased and the mass decreased in that way the number of rotation remain as previous?
0
Resultant force in circular motion with gravity and tension
2
Would this be a correct explanation on denser molecules end up further away from axis of rotation in a centrifuge?
0
Does an object performing a uniform circular motion rotate even when there is no angular acceleration?