It is known that one of the main problems of interstellar flight is a presence of matter between stars in form of very fine dust and huge asteroids. Which can slowly (or fast) destroy any ship.

What are the most recent estimations about the concentration and size distribution of interstellar matter? From very small to high scales. Particularly i am interested in the local group of stars.

Update II: smallest object still named as a meteorite (Yamato8333) is about 12mg in mass and roughly 2mm in diameter.

Update: Below is an image of an interplanetary dust particle (IDP, not Yamato8333). 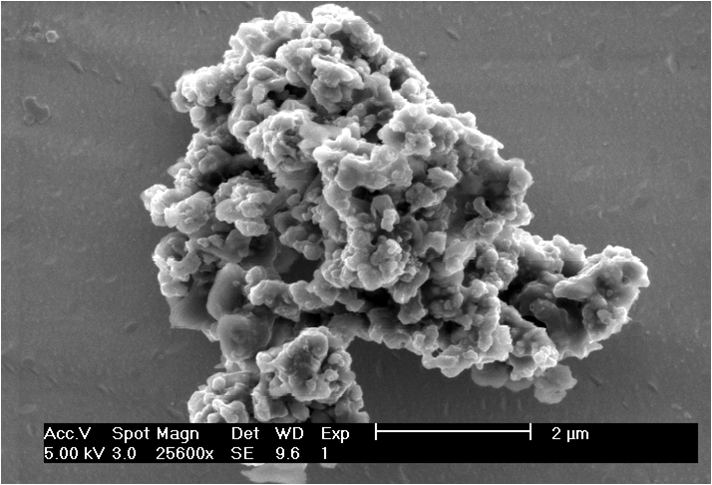 Do collisions with interstellar dust and other small particles provide a significant threat when traveling in a space ship?

We do have lots of data on this for spaceship Earth. In this Letter to Nature, the following figure appears: 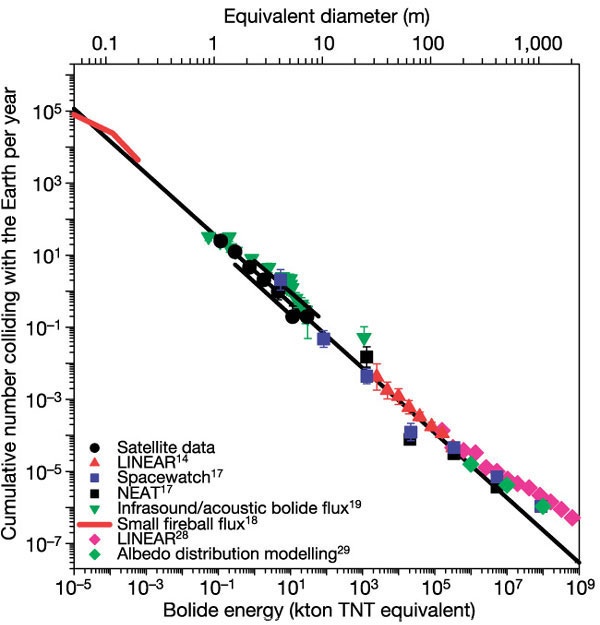 Shown is the expected number of annual events exceeding a given kiloton TNT explosive power. Notice that the energy range displayed covers 14 orders of magnitude.

Now, interstellar travel in a spaceship will be different from circling around the sun on a huge piece of rock. Obviously, your spaceship will be much smaller. This can be compensated for by scaling back the hit frequency with the ratio of the spaceship:earth surface area. Secondly, Earth moves within the solar system where the hit frequency with objects is most certainly higher than in interstellar space. However, no matter the exact details of your spaceship, your journey will start with a number of years travel through the solar system. From a hit-frequency risk assessment perspective it is wise to focus on this part of your trip. Thirdly, Earth gravitationally attracts any objects, your spaceship much less so. This effect is not significant, as the average speed at which small objects collide with Earth is 20.3 km/s, well above Earth's escape velocity of 11.2 km/s that describes the velocity change due to Earth's gravity.

Finally, I note that the speed we achieve with our current space flight technology is driven by gravitational effects (e.g. gravitational slingshots) and therefore of the same order of magnitude as the speed at which Earth travels through the solar system.

That is a hit frequency one can live with.

We can extrapolate to less energetic events, using the observed scaling law (the slope of -0.9 shown in the figure). You would need to extrapolating to a billion time smaller events (events larger than an utterly insignificant 0.01 mg TNT explosive power) to reach an annual hit frequency.

My conclusion is that space, and even our solar system, is pretty empty. At the speeds at which we travel, collisions with cosmic dust pose no major threat to space flight.

To my knowledge, the bulk of space dust is in the micrometer-range, not in the millimeter range. You may want to look at the Wikipedia entry on Cosmic dust for information on the dust and the references therein.

Here are two papers (both preprints found at ArXiV.org) that give some information:

If this is for research, you may want to consider using the SAO/NASA Astronomy Database for literature queries.

The average density of the intersteller medium is 10^6 atoms per cubic meter. I got that straight out of M. M. Woolfson, On the Origin of Planets (Imperial College Press, London, 2011). I used this textbook as a reference for a paper on planet formation, it's quite good.

For the sake of comparison (and a sloppy comparison at that), one litre of air contains roughly 10^22 molecules.

According to the Wikipedia article "Interstellar medium" (source):

Which is less dense even than man-made vacuums.

Interstellar dust are thought to be primarily micron-sized, while the nanodust I mentioned is thought to be primarily interplanetary in origin. The micron-sized dust moves typically at ~26 km/s relative to Earth, similar to the neutral helium gas from interstellar space. The nanodust, on the other hand, can reach speeds in excess of 100 km/s because they become entrained in the solar wind flow.

Small dust particles tend to penetrate roughly the equivalent of their radii into materials of similar densities when moving at high speeds. We know that the wire antenna on several spacecraft (e.g., Wind and THEMIS) have been cut by dust, so yes, they are capable of causing some damage. However, they do not penetrate through the bus of the spacecraft in most cases, as Wind has been working without fail for over 20 years (and the Voyager spacecraft for over 30).

Not the answer you're looking for? Browse other questions tagged astrophysics interstellar-matter or ask your own question.

1
What is the interstellar density of mm sized "dust" particles?
101
What is the speed of sound in space?
0
Interstellar Debris
0
For the purposes of intergalactic space travel, would IGM or other intergalatic particles be an issue?
-1
Light speed travel precautions