Work Done on a rotating thin rod by hinge Forces

So I was studying the concept of rotational energy through a video, and the guy presented a problem, It's like this:

"Suppose a thin rod of mass M and length L/2 is hinged from one end. Then, it is released from rest (under gravity) from a horizontal position (making an angle of 0 degree from the horizontal). We have to find "Angular Velocity of the rod when it makes a right angle with the horizontal (as shown)" 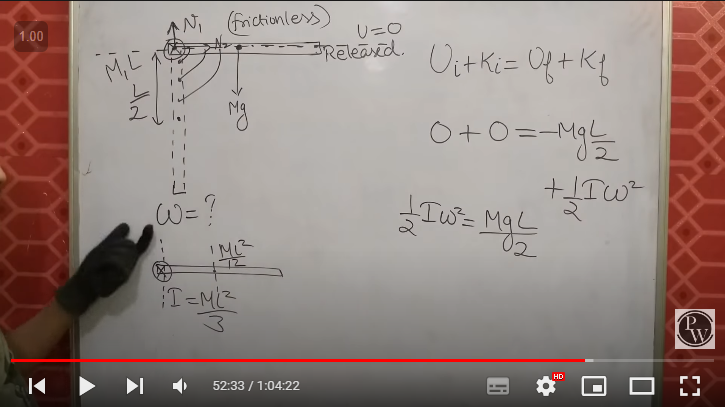 As you can see, he solved this problem using mechanical energy conservation.

On the L.H.S. of the equation, he took initial potential and kinetic energy; on the RHS he took final rotational kinetic and potential energy.

Here lies my confusion. According to me, when the rod is rotating, the hinge reaction force, which is prependicular to the rod, also does work (labeled as N1 in the image), then initially, the rod should also have potential energy due to these hinge forces (or he should have included work done by these hinge forces in the equation). Why, then, did he not include energy due to these forces in the equation?

On the right hand side of the equation, he wrote the term for Kinetic Energy as:

According to my conceptual clarity, this includes a change in kinetic energy due to gravity and hinge forces too.

And the change in potential energy due to gravity, which is:

which is a change in potential energy due to gravity ONLY.

but there is no mention of these hinge forces. He then solves the equations to get an answer.

Why doesn't he account for work or energy changes caused by hinge forces?

I believe that the work done by hinge forces should be included as a term on the left side of the equation.

A good explanation would help in clarifying my concepts.

0
Work done By Internal Forces Inside a hinged Rotating Rod

1
Work done by constraints on rotating rigid bodies
2
Does the hinge reaction do any work?
2
Rotational work done
3
Rotating Rod As a conical pendulum
0
Work done moving a satellite into higher orbit
1
Why do outermost particles on a rotating rigid body gain more kinetic energy?
0
Stuck on a rotational dynamics related question
0
Work done By Internal Forces Inside a hinged Rotating Rod