Is it really the Tension in the rope that pulls the pulley?

We always solve questions by drawing two tension forces at the diametrically opposite end, to show that tension is pulling the pulley, but from the research I have done, it is clear that it is not exactly the tension force but the summation of normal forces between rope and pulley that pulls it. Then why do we not use this in real life and put 2 arrows along opposite points of the pulley? And how can I prove that the summation of normal forces is actually equal to $2T$?

For simplicity, assume the pulley is not rotating but the rope is slipping on it and is massless (nearly) and frictionless, and that the rope also has negligible mass.

It would be great if you were able to clear my concepts.

Consider a segment of the rope with length $r\,\mathrm d\theta$, where $r$ is the radius of the pulley: 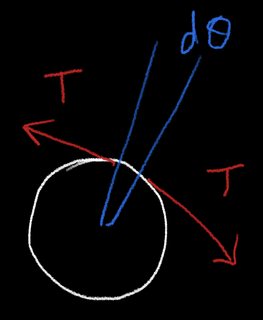 The tensions on either side of this segment are not quite antiparallel, so there is a net force with magnitude $T\,\mathrm d\theta$ directed towards the pulley’s center.

If we split this force into its horizontal and vertical components, and integrate over the upper half of the pulley, the total force on the pulley is

(If you haven’t done these integrals before, the trick is that $\sin\theta\,\mathrm d\theta = \mathrm d(\cos\theta)$.) You can also use this method to find the net force on the pulley if the two ends of the rope make some angle other than a half-turn.

The normal forces on the rope, plus the two tension forces, must add up (vectorially) to zero. If they didn't, there would be an unbalanced force on the rope, and because the rope is very light this would mean the rope would have a large acceleration.

It is good to see what is really happening in a system, especially in a real system. For most purposes though, we can ignore the intermediate stage and just say that the tension forces, plus the force on the pulley mount, add to zero.

Consider a small segment of rope $AB$ located at an angle of $\theta$ is in the left digram.

The two tension forces $T$ do not act along the same line of action as shown in the middle diagram.
The segment of rope $AB$, which subtends an angle $\delta \theta$ at the centre of the pulley, is acted on by three forces, the two tension forces and the normal reaction $N(\theta)$ and since there is no net force on the rope segment the three forces can be drawn as a triangle of forces as shown in the right hand diagram.

By symmetry the $x$-component of the net normal force is zero.

0
How does the tension exactly act on the pulley?

5
Tension of rope. Different Answers?
10
When is tension constant in a rope?
6
Pulley-rope tension question
2
Understanding tension based on assumptions of pulley system
2
Interaction between an ideal pulley and an ideal rope
0
Tension within a hypothetical pulley system
1
Why is force on a pulley two times the tension in the rope?
1
Tension by a string on a pulley