What would be the shape of the magnetic field around a current carrying wire made up from iron?

It is known that around a continuous d.c. constant current carrying wire a magnetic field is created, consisting from concentric rings of magnetic flux as shown below: 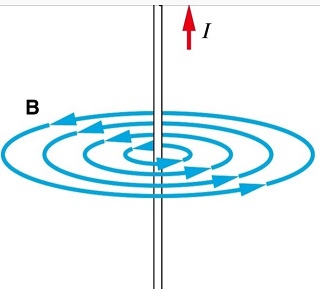 as described by Ampere's circuital law:

I believe this describes the general case and can be applied to any electric conductor material metal like copper or aluminum.

However soft iron although very difficult to magnetize permanently, is a ferromagnetic material with very small magnetic reluctance that would possible absorb all magnetic flux around the wire and confine it inside a hypothetical wire constructed by soft iron. Thus, a constant d.c. current carrying iron wire would be magnetized in contrast to a copper or aluminum wire which are not magnetic, creating possible its own magnetic moment $m$.

What would be the shape of the magnetic field on the soft iron wire? And would all the magnetic flux contained inside wire and no outside, something like a magnetic shielding effect?

And to make things even more complicated what instead of soft iron a type of hard iron compound was used that could permanently magnetize the wire? What would be then the shape of the magnetic field on the wire when electric current is passing through?

You can not magnetize iron in a closed loop field. so it will not change the field outside. also the iron "feels" only the field inside the iron.

of the iron would be 5000 times smaller than that of a copper or aluminum wire and the surrounding air around the wire for a given length and thickness of the wire.

Therefore I expect in practice the magnetic field inside the iron conductor to be much more stronger than that of a normal copper or aluminium conductor for a given current value inside the conductor.

Inside the iron wire material the form of the magnetic flux will be indeed concentric rings with the strength of the magnetic B field in the ring formation being zero at the exact center of the wire and reaching its maximum at the surface of the naked iron wire at distance from the center r, with $r=R_{W}$ where $R_{W}$ is the given radius of the wire (i.e. thickness of wire $R_{W}$ not to be confused with magnetic reluctance $R$).

Actually it can be proven that the magnetic concentric ring B field inside any D.C. wire electric conductive material varies in strength with distance $r$ from the center of the wire by the equation for a finite thickness wire $R_{W}$,

with the magnetic ring field strength reaching its maximum at the surface of the naked wire, distance from center $r=R_{W}$. Where μ in this equation is the magnetic absolute permeability of the wire material. After the surface boundary of the wire is passed $r>R_{W}$, the field diminishes on air with distance $r$ calculated by the equation for infinite thin wire,

using Ampere's Law but assuming an infinite long therefore also infinite thin wire. This last restriction in Ampere's law of an infinite long wire so that the equation is true, is necessary in order any relative magnetic permeability of the wire material different than ~1 can be neglected. Notice, equation above cannot be used to calculate the magnetic field inside the conductor $r<R_{W}$ for a finite thickness conductor of radius $R_{W}$. It is only valid for the magnetic field around the conductor on air. 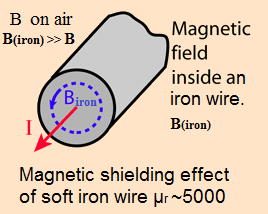 Try to make an air solenoid using soft iron wire and then try to measure the magnetic field inside the solenoid at the center axis inside its air gap. One will be surprised how weak it will measure compared to the predicted value. The soft iron wire will behave as a solenoid ferromagnetic core draining most of flux out of the solenoid's air gap. Efficient solenoid's are possible when cooper or aluminium wire is used simply because the permeability of the wire is practically the same with that of air or vacuum thus ~1. A solenoid made out of soft iron wire would be one of the worst one can ever make.

This can have interesting applications on coaxial wires whenever magnetostatic shielding is necessary in addition to EM radiation shielding where a mantle of soft iron could be applied additionally.

Also, even more natural magnetostatic shielded wires can be constructed when using mu-metal with relative permeability 80,000 to 100,000 as the wire shielding material although these wires would provide shielding for relative small currents since mu-metal has a small relative magnetic saturation threshold compared to soft iron. However, mu-metal is already being used nowadays as a mantle in magnetic shielding of wires for various applications (https://en.wikipedia.org/wiki/Mu-metal). For very large currents carrying wires and additional soft iron mantle magnetic shielding would be also welcomed.

Not the answer you're looking for? Browse other questions tagged electromagnetism condensed-matter electric-circuits material-science ferromagnetism or ask your own question.