How to derive a physical model of temperature above the earth surface?

At a point on the surface of the Earth, if I go straight "up" a distance $z$ (radially outward from the Earth), I'd observe a temperature profile $T(z)$. The conventional wisdom from the meteorology community (that I can find at least) is that this temperature decreases linearly up to about 11km as $T(z)=T_0-\gamma z$, where $\gamma$ is a constant known as the lapse rate. However, I have measurements of the temperature over several heights within the first few meters of the earth that clearly are not linear in height. I suspect the constant lapse rate is a simplification of the physics that is applicable after the first few meters up to 11km.

My question is, what are the governing dynamical equations for air temperature above the surface of the earth? I wish to set up and solve such an equation, and use the solution form as a fitting function to my measured data. My guess is that it would be some combination of the heat equation with solar irradiance as a kind of forcing term, coupled with a fluid dynamics equation that accounts for the thermal expansion and motion of the air. The model would have to account for the observed non-linear profile in the near-surface environment, and probably become linear at higher ranges. Any insight or references are appreciated.

To clarify, I'm okay with something that can't work over the whole earth surface. Suppose I know local parameters of the surface, and let's say that is homogeneous over a large enough swath that you can neglect some lateral effects. You can even assume it's flat if you want. I don't know what the reasonable assumptions are, nor do I know what are workable ones that lead to simple solutions. I'm just trying to get a handle on the physics of temerature and air in this environment.

Okay, so this could be incredibly complicated or incredibly simple, depending on how one looks at it.

At the most basic level, you can treat this as a solution to the heat equation:

This then gives you a linear solution for temperature, exactly what your lapse rate equation gives.

Now, your deviations in observations could be due to several things. First, the equation is for the time-averaged lapse rate; how many samples did you take? Second, the value of $\gamma$ depends heavily on humidity; what were the conditions at the times of the observations?

If you wanted to get fully into how to do all of this, it's not easy as others have alluded to. For regions under, roughly, 1200 m, we are within the atmospheric or planetary boundary layer. The composition of this layer is shown in the figure [from Wikipedia]. 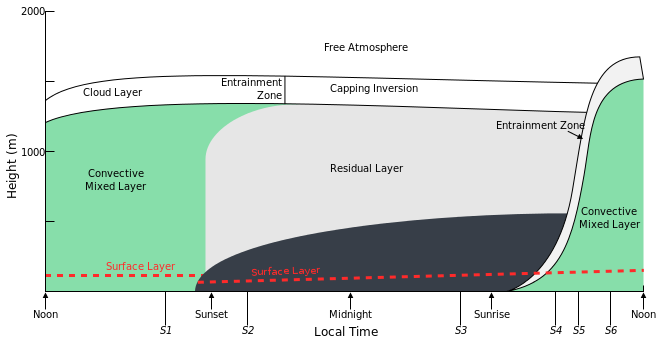 In this layer, there's a lot that goes on. But you can actually solve it in 2D (in spherical coordinates even) using the turbulent boundary layer equations, being sure of course to include the buoyancy terms and Coriolis terms if you are looking at a large enough scale where that matters. And really you need the low-Mach number form of them (rather than incompressible) to include the temperature equation and density variations.

Outside of 1200 meters or so, you can use the inviscid, low-Mach number Euler equations, again in 2D and again including buoyancy and Coriolis. You don't need to worry about the viscosity here to get decent answers, but know that from 1200 meters upwards is probably turbulent and that makes accurate solutions much, much harder. But for simplicity sake, you can keep it 2D and inviscid.

Then you need to blend the two solvers together at the edge of the boundary layer. The reason we do it this way is because the Euler equations+Boundary layer equations are much, much easier (less expensive) to solve even with the coupling of the two solutions through boundary conditions than it would be to get a fully turbulent Navier-Stokes solution everywhere.

The aerospace literature is very rich with how to do this and it would apply equally well to atmospheric work because the equations are the same (with the additional body force and source terms for rotating planets and buoyancy). A very quick internet search for "boundary layer coupled euler solver" turned up several recent AIAA papers from the same group, one of which is linked below for completeness.

I just re-read the question a bit more carefully and see that you are only taking measurements over the first few meters. I won't get full into boundary layer theory, but within the distance very close to the wall, nothing is linear at all. Here is an example of the profiles in a flat-plate boundary layer for velocity and temperature [from Wikipedia: 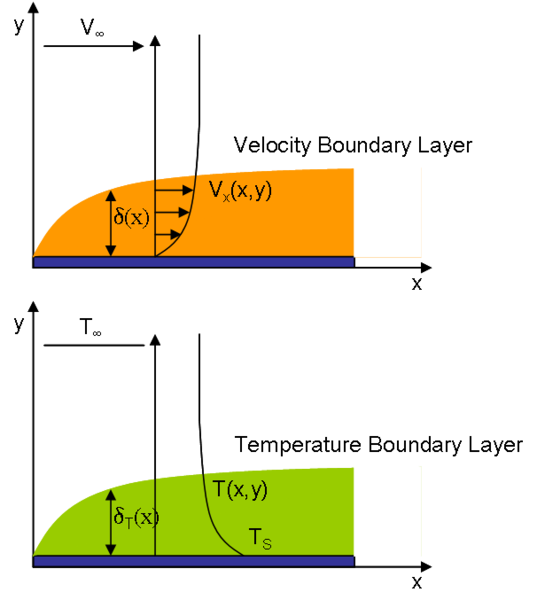 You can see that even on a perfectly flat plate with no roughness or variation in temperature along the plate, there is a non-linear region before the temperature becomes constant.

Again, using the boundary layer equations with the applicable terms in it will give you the solution you are looking for and it will certainly be non-linear near the surface, even for surfaces that are "simple" like an infinite, smooth flat plate. The surface roughness and non-uniform temperatures will only serve to make it less linear in that region.

Not the answer you're looking for? Browse other questions tagged thermodynamics fluid-dynamics weather meteorology or ask your own question.