Contradiction in my understanding of wavefunction in finite potential well

How do both of these statements reconcile with one another? By looking at the diagram below, we see that we have a decreasing amplitude as we go across to the left. But surely the particle will want to be in a region of lower potential? 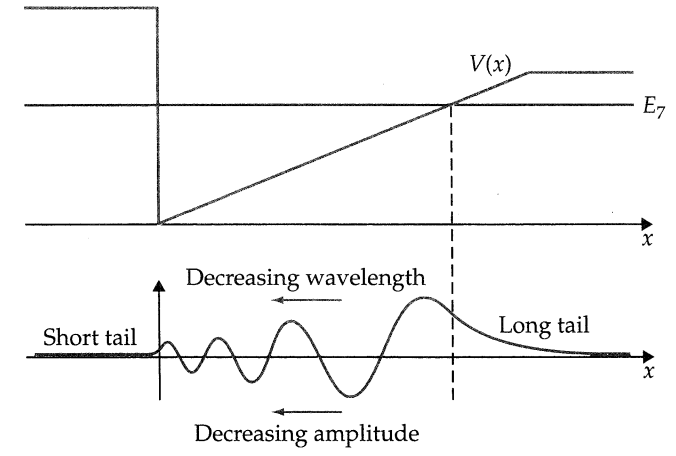 Even classically, particles with a fixed total energy spend more time near the turning points since this is where the motion is the slowest. The probably of finding the particle in a small region near the bottom of the well is NOT the largest: it is in fact the smallest.

Once it does occupy this region (bounded by the two turning points, for a given total energy), it does not occupy every part of this region with equal probability.

Imagine a perfectly elastic ball dropped vertically onto a flat surface. The ball heads for the point of lowest potential, ie the ground, but because of conservation of energy it bounces back to its initial position and continues to bounce up and down. It spends most of its time near the top of its bounce, because it is ravelling more slowly there, so the probability of finding it at a given instant is highest at the top of the bounce and lowest at the bottom, even though the bottom is the most attractive place to be in terms of PE.

You are probably looking at an energy eigenfunction, a wavefunction which has a definite energy. The statement "$E-V$ is the kinetic energy" does not apply to a single position but to the state as a whole.

This might be a confusing statement so let's compare this to the classical case of a similar well given by $$U(x)=\cases{\infty&$x\leq0$\\\frac{20}{50}x&$0<x\leq 50$\\20& $x<50$}$$ See picture below. I used large values for the width/depth of this well because for the quantum version some effects are shown more clearly.

Imagine you release a particle in this well and you forget about it. What is the probability (density) to find the particle at a position $x$? Well, it is proportional to the time it has spent in the region $[x,x+dx)$ so $$p(x)\propto dt=\frac{dt}{dx}dx=\frac{dx}{v(x)}$$ For a better explanation check out the first link. Like you mentioned, you can easily calculate $v(x)$ using $$v(x)=\sqrt{2(E-U(x))/m}$$. This is shown here: 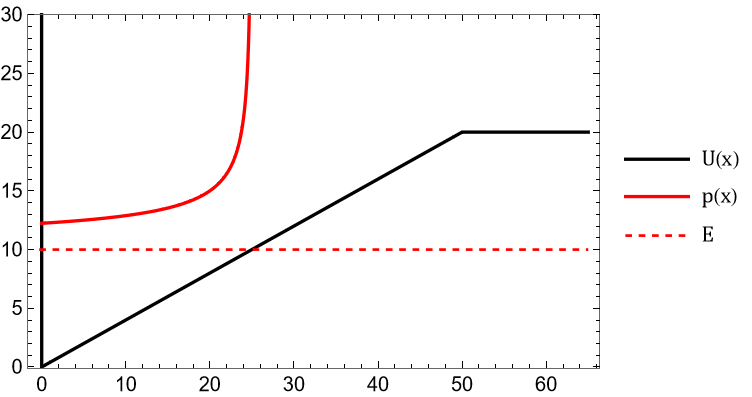 Let's now compare this to the quantum well. 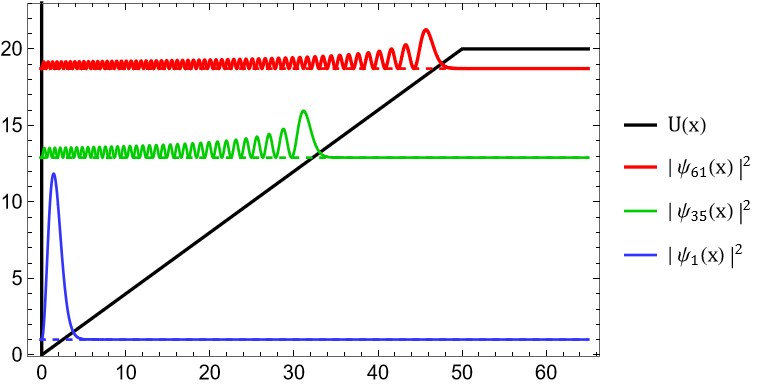 As you can see the wave functions are much better behaved compare to the classical probability function, very nice! Notice that only the ground state "minimizes" the energy. What is shown here are some of the eigenfunction which are all the possible states with definite energy. Since this is just a list there is no reason one of these states should minimize the energy. The energy eigenfunctions are special because they are the only wavefunctions whose probability amplitude is stationary in time.

A state you would find in nature would typically be many of these eigenfunctions added on top of each other, a "superposition" of different eigenfunctions. The probability density of such a state is not stationary and can slosh around in the well.

Not the answer you're looking for? Browse other questions tagged quantum-mechanics wavefunction potential schroedinger-equation semiclassical or ask your own question.

37
What's the deal with momentum in the infinite square well?
6
Wavefunction Amplitude Intuition