In page-385 of Roger Penrose's Road to Reality, the following is written:

In our Aristotelian scheme, it is appropriate to think of spacetime as simply the product:

Now I am a bit confused, isn't it still a Fiber bundle even in the Aristotelian sense because we have the trivial bundle of $\mathbb{E^1}$ over $\mathbb{E^3}$? The fact product of set are bundle is mentioned in page-329 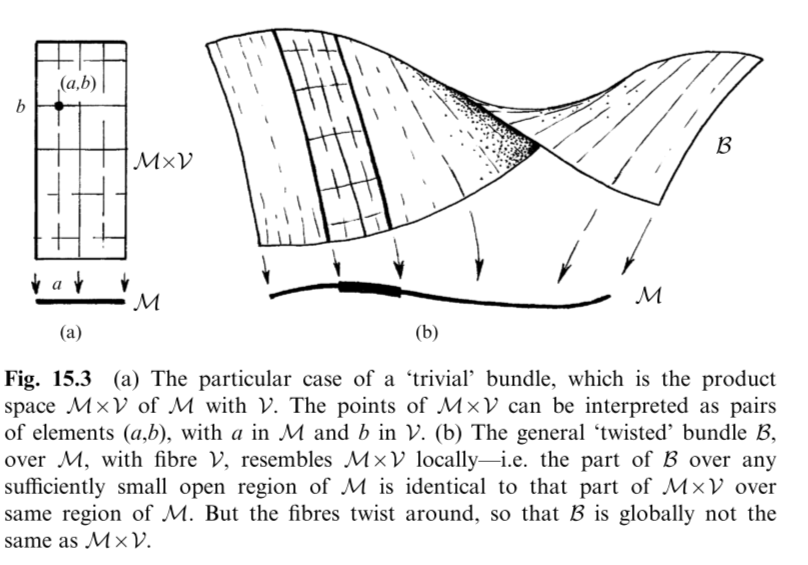 Penrose is saying that the 'Galilean' description of spacetime is as a fiber bundle with $\Bbb{E}^3$-fibers $(\mathcal{G},\gamma,\Bbb{E}^1)$ where $\mathcal{G}$ is a topological space homeomorphic to $\Bbb{E}^4$ (so WLOG you may as well assume it is $\Bbb{E}^4$), but the mapping $\gamma$ is no longer a trivial mapping. That's the difference he's trying to highlight: in the Aristotlean picture, we have a trivial product space, so if you want to consider it as a fiber bundle then the bundle projection is the obvious one, but in the Galilean picture, the projection is not the obvious one. To be really explicit:

I noticed a slightly subtle and potentially confusing matter which I didn't emphasize above. It is the difference between trivial and trivializable fiber bundles, where I'm using the first to mean 'equals a product bundle', and the second to mean 'is isomorphic to a product bundle'. Now, it is a theorem in topology that every fiber bundle over a contractible space (eg $\Bbb{E}^1$ or $\Bbb{R}$) is trivializable. The point is that in the Galilean description, we do have a trivializable fiber bundle (because of the topological theorem), but there is no canonical choice of an isomorphism, and hence there is no way we can canonically identify the various fibers. 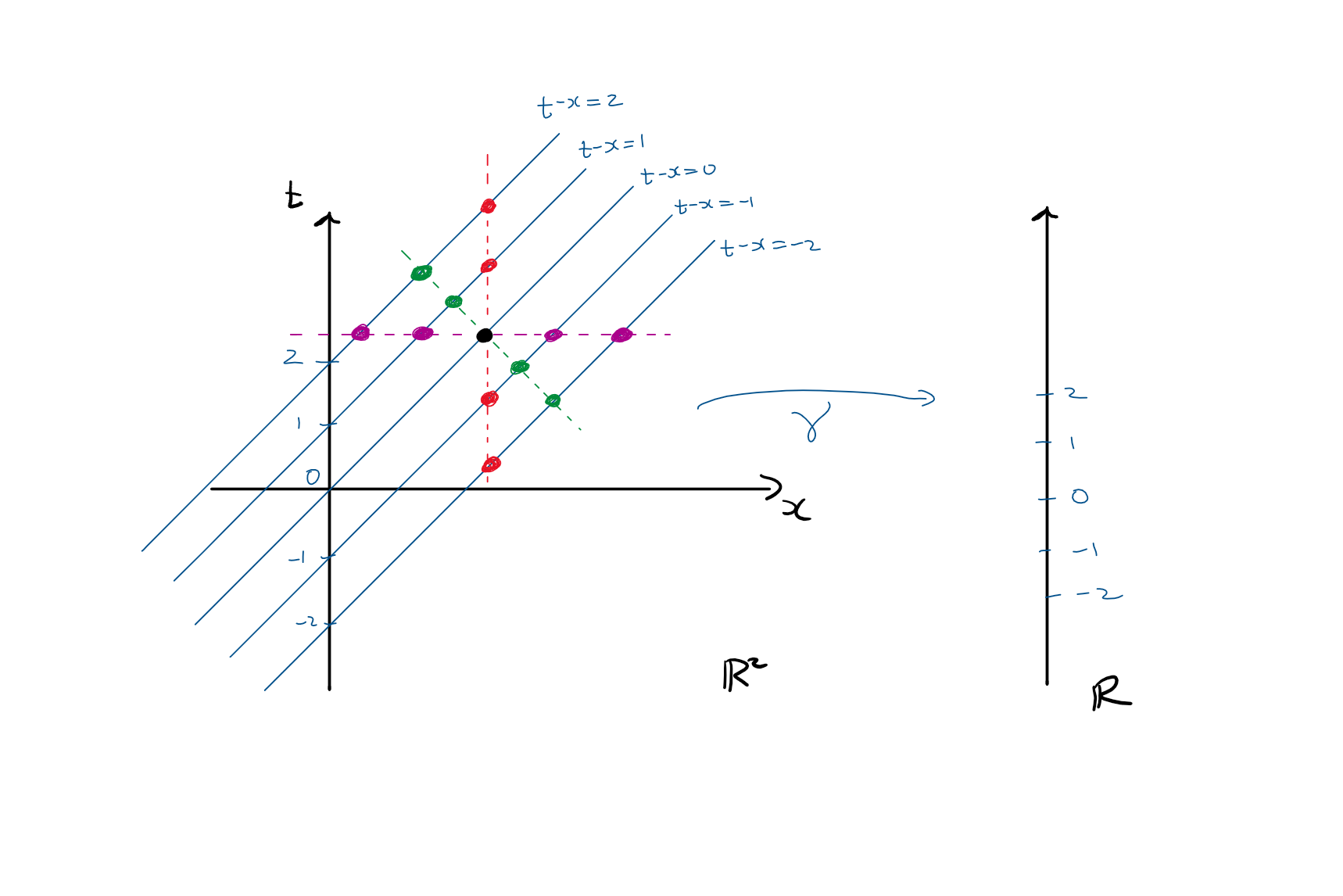 The blue lines are the various fibers of $\gamma$ (I didn't draw the fibers of the trivial projection $\alpha$, but these are horizontal lines). To emphasize just how different the fibers are (yes, they're all isomorphic to $\Bbb{R}$, but there's no canonical isomorphism between them), consider the black dot in the picture above. Is there really an obvious correspondence with the other fibers? For example, I could say "I like the vertical direction, so the black dot should correspond to the red dots in the other fibers". But then I could ask what's so special about the red vertical line? We might then consider the horizontal purple line and say those dots should be identified when we consider the various fibers. But then someone else might come along and say they like the diagonal (green) line better.

As you can see, this is an extremely arbitrary choice. Later on, this also relates to the fact that in Galilean relativity, we shouldn't single out any one inertial observer (i.e a straight line). All such lines are equally good, and thus no one is preferred, and hence no 'absolute' canonical identification of the various fibers is possible. That's why we're modelling things using a fiber bundle which is not just the product bundle.

Not the answer you're looking for? Browse other questions tagged special-relativity differential-geometry inertial-frames galilean-relativity or ask your own question.