My kids just made me aware of a rainbow phenomenon I have never heard of before, happening in the sky up above our heads. I have heard of (and seen) double rainbows before, and I was aware that it's also possible for inverted rainbows to be around the light source instead of having the light source be behind the observer. So the initial inverted rainbow around the setting sun was a cool photo op, even if want exactly unusual (7:04 pm): 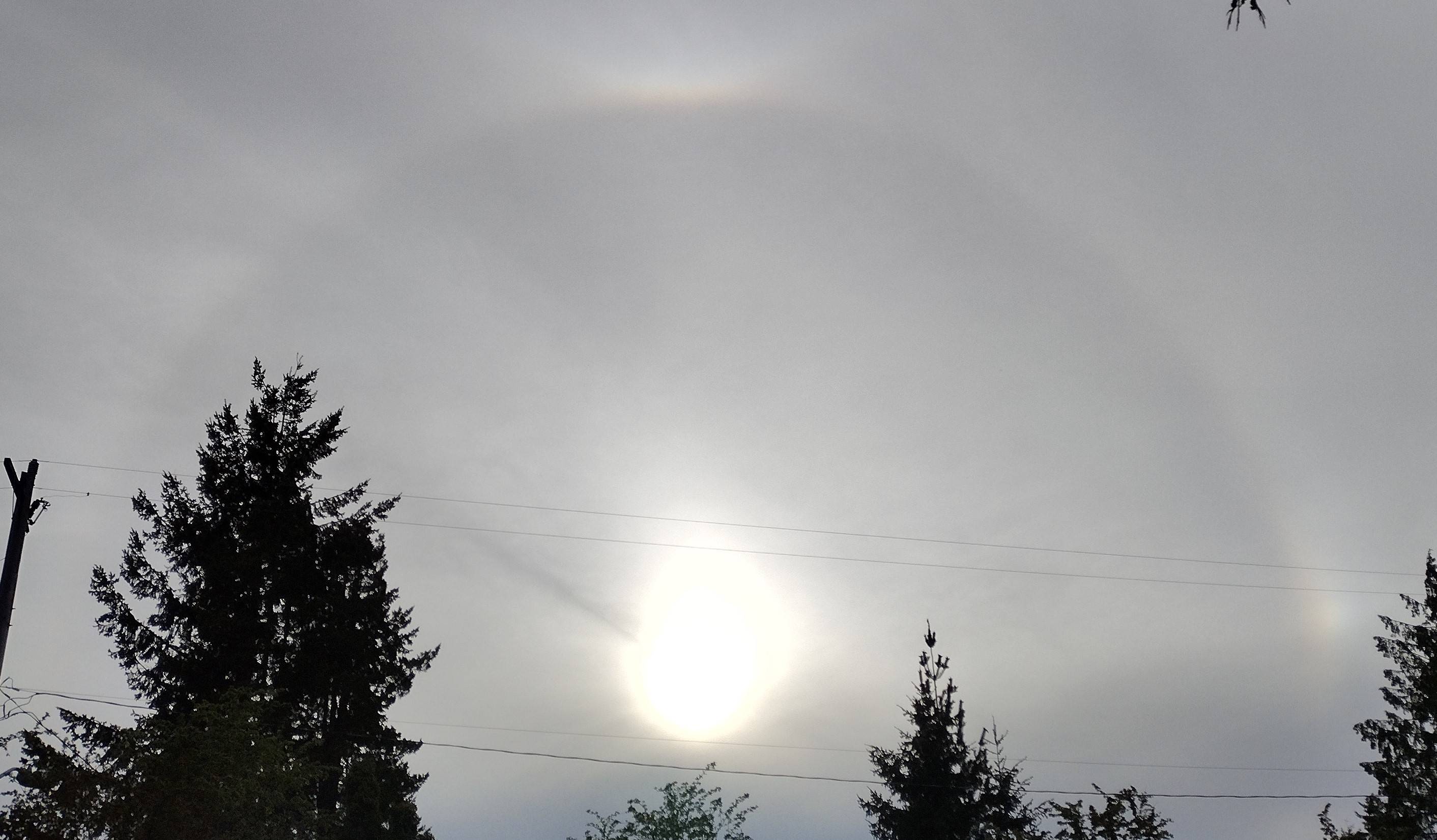 A few minutes later (7:12 pm), one of the kids pointed out another rainbow, and that's when things got interesting, because this rainbow didn't seem related to the sun at all: 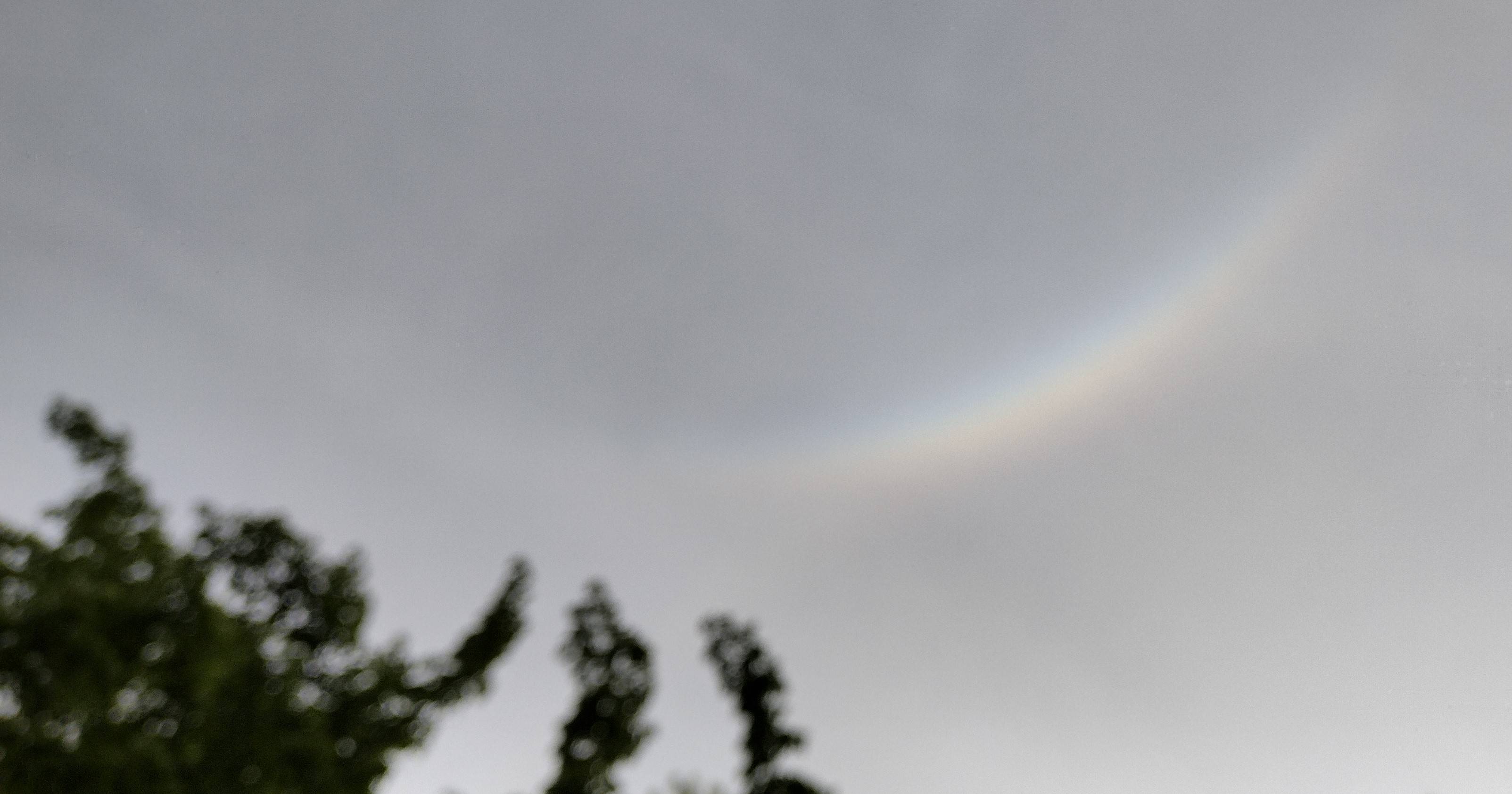 It wasn't until I stared at it a little longer that I noticed that the rainbow around the sun had a twin - and as near as I could tell with how faint everything was, this twin was perfectly tangential to the second rainbow that didn't seem related to the sun at all: 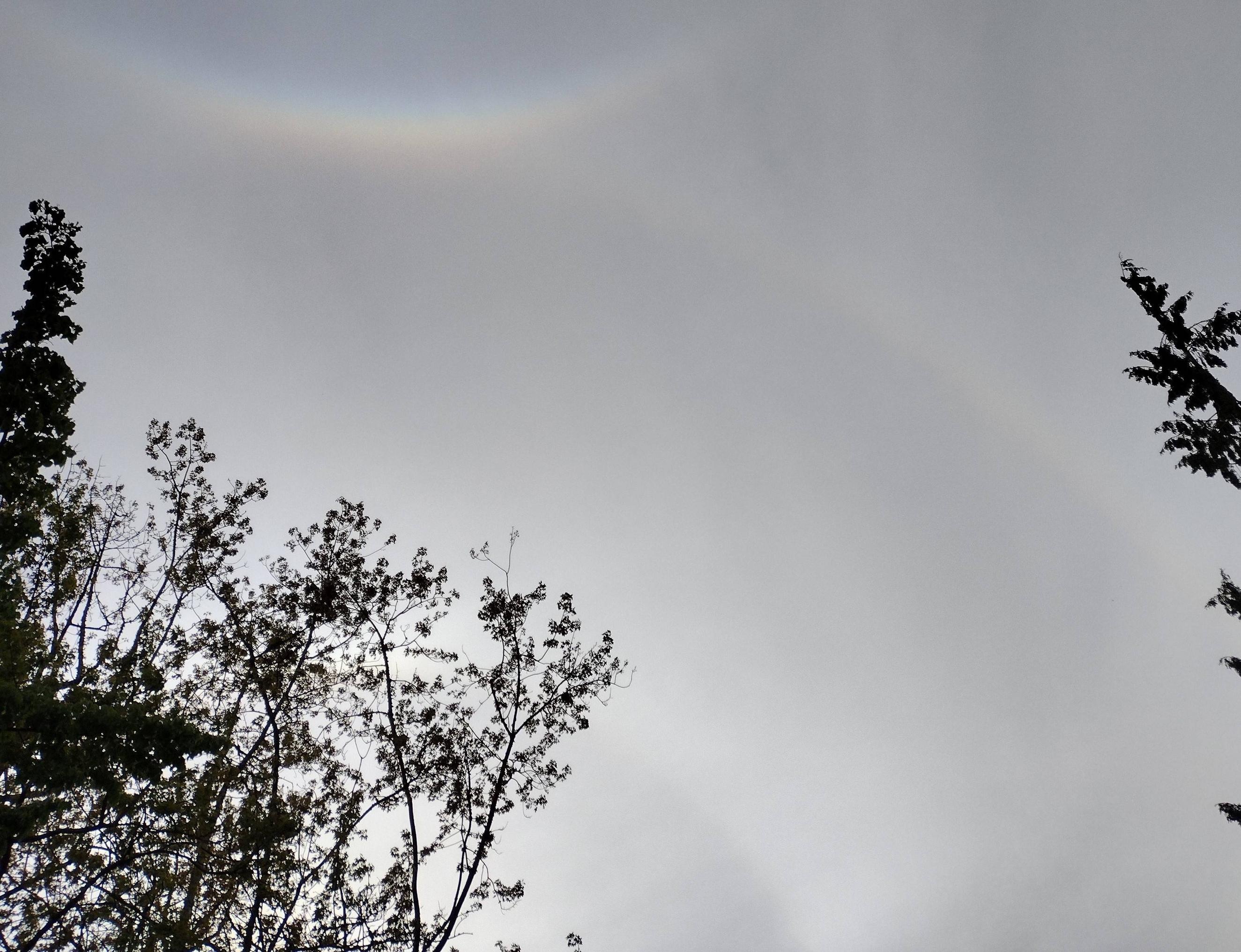 For what it's worth (it's kind of hard to see in the pictures, but I was able to confirm this with the naked eye), the red/blue orientation of the tangential rainbow matches that of the double rainbow it intersects; that is, while the double rainbows (I'll say rainbows I(nner) and O(uter) to make it easier) have red on the inside, the (T)angential rainbow has red on the outside, so that the red on T lines up with the red on O, and the blue on T lines up with the blue on O at what appears to be the single point they meet.

If it weren't for the fact that the visible rainbows appear to line up so perfectly, I would assume that what I was looking at was just two unrelated rainbows: one created by the sun, and the other created by some unknown light source that I wasn't able to see (ambient light from the city, perhaps? Though I have a hard time imagining that to be bright enough / focused enough to create a rainbow; and I think it was too early for streetlights to be on, so I'm without explanation there). But the tangential nature of rainbow T has me baffled.

Is it just coincidence that the visual bands line up so perfectly, or is there some kind of known phenomenon that would explain why these rainbows were generated this way?

optics visible-light
Share
Improve this question
asked May 23 at 3:39

It is kind of hard to tell what is what from the photos - I'm sure it was stunning in person though.

I reckon what you're seeing is a form of halo though - an optical phenomenon produced as light passes through suspended ice crystals. There is so much variation in what is observable, depending on the specific conditions creating the crystals.

The ring around the sun is known as the $22^{\circ}$ Halo, and often we will notice bright spots on the sides of this halo which gained the term "sun dog". The inverted rainbow you see at the top I think is called a Circumzenical Arc.

Read through the wiki link a bit, and see if any of the links might describe what you observed. Supralateral arc could be a possibility. But I don't doubt for a second that they are related, as opposed to two separate unrelated rainbows.

5
Shape of the rainbow
1
Why rainbows form around flashes?
9
Rainbow in cloud near Sun
6
Is there a zone where 'colour' overlaps between double rainbows?
34
Do rainbows show spectral lines from the sun?
3
How pure are the colors of the rainbow?
13
If different light frequencies travel at different speeds in air, why doesn't the sun have a rainbow halo?
0
Rainbow colors along horizon