How to understand the polarization rotator using a PBS, a quarter-wave plate, and a mirror?

In optics experiments, I often see the following optics configuration to rotate the polarization of an incident linearly-polarized laser beam. The final reflected beam has its polarization rotated by 90 degrees. My question is:

For the mathematical description of the process, I have included the Jones calculus below.

Where could I be wrong in understanding its principle? Thanks!

Here is how I use Jones calculus to describe the process:

optics geometric-optics polarization
Share
Improve this question
edited May 21 at 12:58
ynyin
asked May 20 at 22:05

The problem is that you need to be careful with the fast axis of the quarter wave plate (QWP). Here is how your example works, using the same optical calculus software as I used in another answer here.

The Jones calculus model for your example is here: 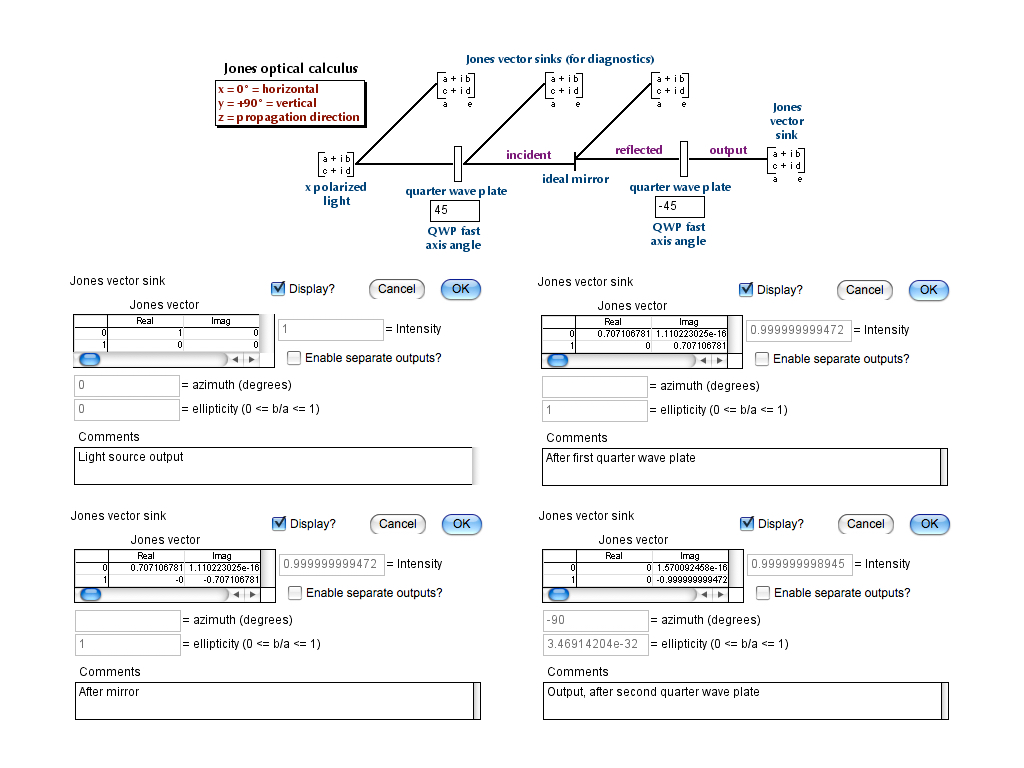 The output Jones vectors are shown in the four dialog boxes under the simulation model. Note that the right handed coordinate system is such that the first QWP has its fast axis at +45 degrees, while the second QWP, which is simply a convenient way of dealing with the reflected ray from the mirror, has its fast axis at -45 degrees. This is because the reflected ray “sees” the QWP’s fast axis rotated 45 degrees the other way. The output is linearly polarized, as expected, and orthogonal to the incident ray’s linear polarization.

The Jones calculus equation is this:

If the fast axis has been kept at +45 degrees, the output Jones vector would have been this: 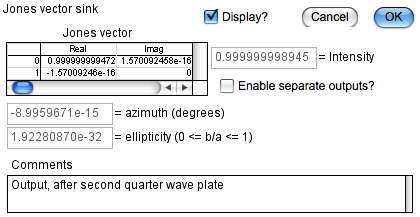 In this case, the output ray would be linearly x polarized, just like the input light.

Added to address the OP’s query. The Jones calculus matrices I used in my software back in 1990-1992, and in the answer above, are from the following books: 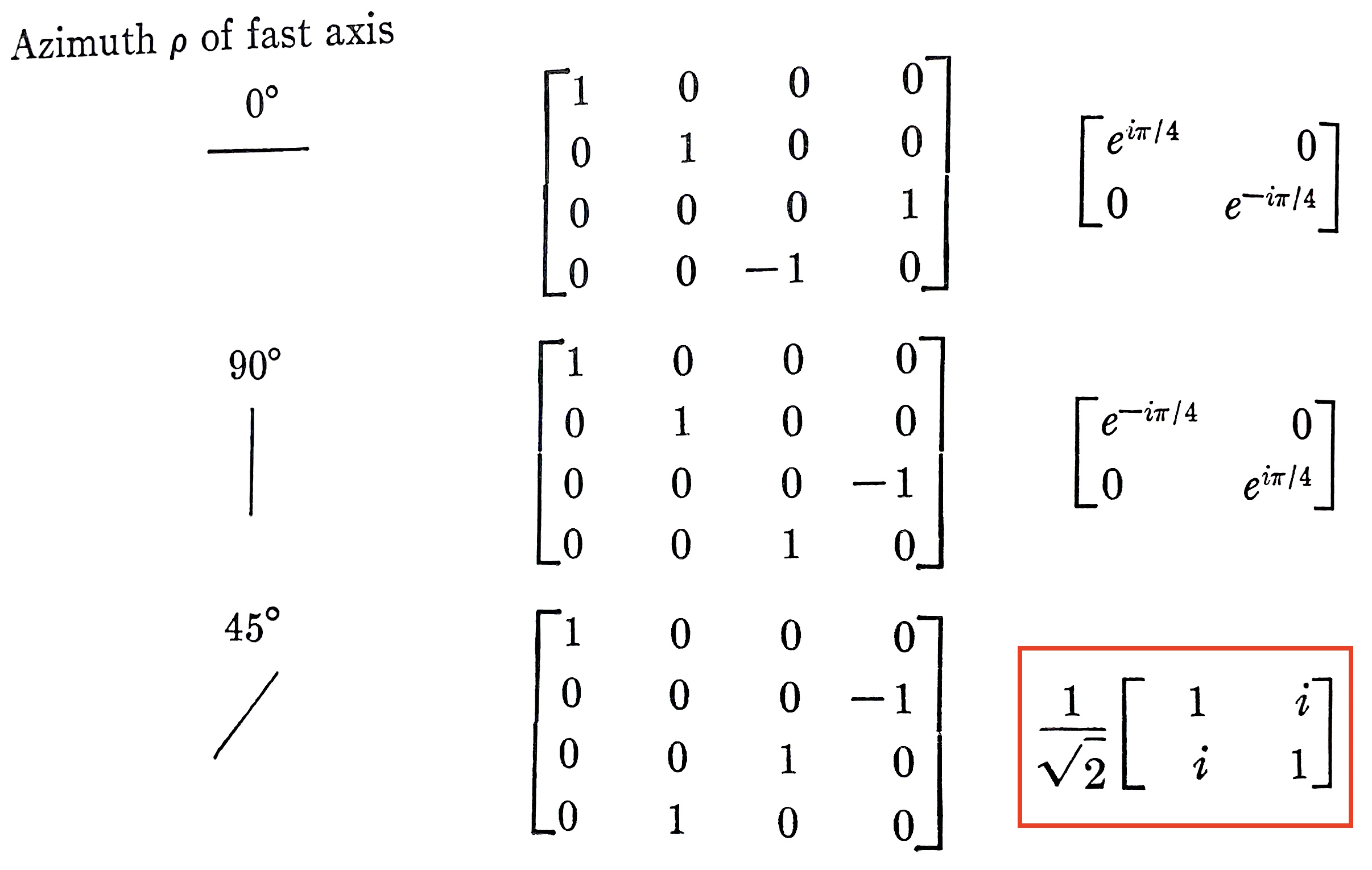 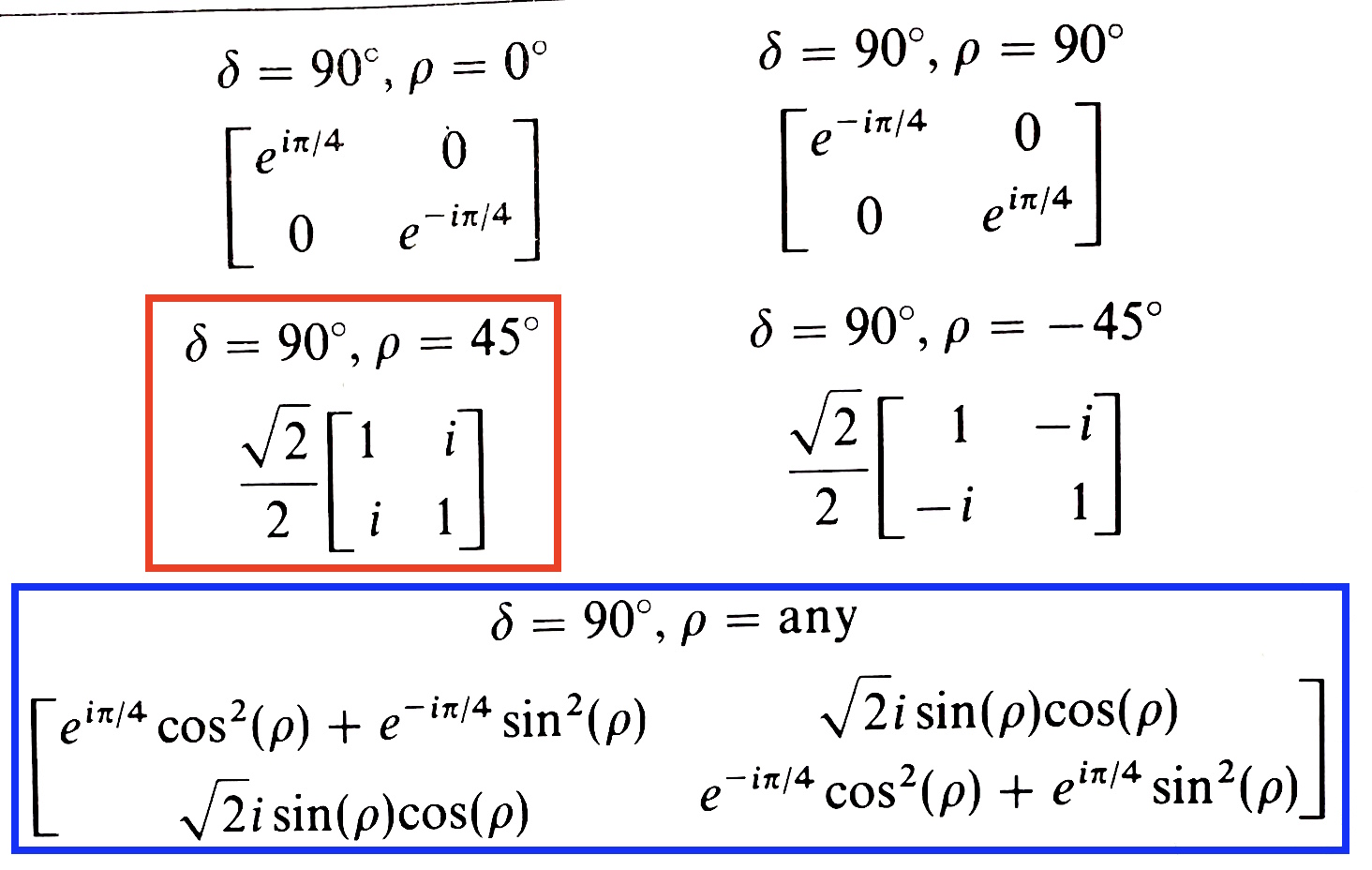 The wikipedia Jones calculus table, with my annotation, is 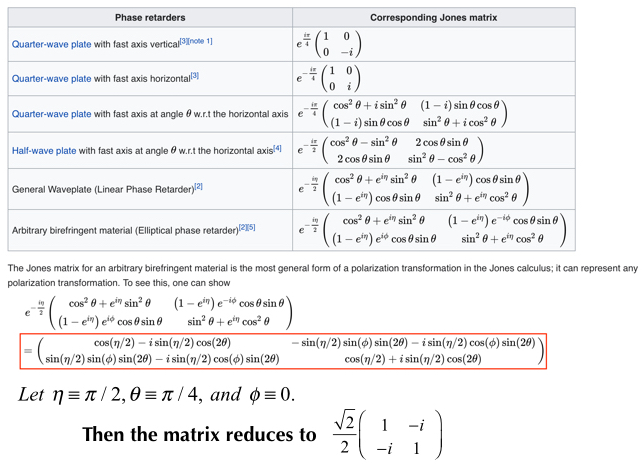 Your error is the reasoning with the flipping of the handness in the mirror. The handness may look like it was flipped, but the direction of the beam flipped also, meaning that the handness (which is also related to the beam direction) didn't flip.

Think about it in this way: if you put the mirror not perpendicular to the beam but with an angle, such that the reflected light would deviate with an angle of $1^\circ$ (almost no deviation), would you say the handness flipped? No, because the mirror doesn't flip handness, only changes direction.

Not the answer you're looking for? Browse other questions tagged optics geometric-optics polarization or ask your own question.

2
about waveplate and polarization
1
Reflection of a polarised beam
1
Optics Brewster's Angle Reflection Intensity
1
Jones matrices of a mystery device
2
Jones formalism for calculating quarter waveplate angle for circular polarized light
1
Double refraction in quarter wave plate and nicol prism
0
Using beamsplitters for co-axial light paths
2
Why is polarised light so bright? if polarizing lens are made to dim the light