Does a volume stay constant when freely falling?

In general relativity, if a volume of particles moves unrestricted through spacetime, is their volume always conserved?

Say we let a collection of particles at rest wrt each other, fall freely in a gravitational field. Will tidal forces keep the volume they occupy constant? My intuition says yes, but how do we prove that? If the metric varies it seems reasonable that the number of small cubes stays the same (while the shape varies,).

Assume the small particles don't attract each other.

In general no, the volume is not conserved. To take an extreme example, consider a shell of particles surrounding the Earth. As they freely fall, their volume will definitely decrease!

EDIT: my example is extreme, of course. Baez at https://math.ucr.edu/home/baez/einstein/node5.html points out that the volume of a "small" sphere of test particles in vacuum does not change, and I'm sure he's right about that. But in my example there's a mass at the center, so the whole volume is not in vacuum.

EDIT: to put some numbers on this, I'll calculate the volume of a 1 km thick shell falling near the Earth's surface (so the inner radius is about the same as Earth's radius, 6372000 meters, and the outer radius is 6373000 meters). Near Earth's surface Newton's equations are an excellent approximation for gravity, so the radius of a falling shell as a function of time is given by the differential equation $r'' = \frac{GM}{r^2}$, where $GM$ is approximately $4 \times 10^{14} m^3 / s^2$ for Earth. Unfortunately there isn't a nice closed form solution for this equation, but we can solve it numerically using Wolfram Alpha with something like

That is for the inner surface of the shell, and gives a delta of -492.569, which is reasonable (we know gravitational acceleration is about 9.8 m/s^2 near earth's surface, so we expect an answer near 490 m for a 10 second fall).

Doing the same for the outer surface gives a delta of -492.415, which again is reasonable (it falls slightly less because it starts further away).

It depends on where they fall. Suppose a tunnel from South to North pole, and a bunch of test masses falling down from one of them. At each moment, the particles farer to the center of earth have bigger acceleration downward, and that closer to tunnel walls, bigger sideways (to the axis) component of acceleration.

From the frame of the particles, if measuring only their relative distances, ignoring the earth, all that happens is a gradual approximation, decreasing the volume.

From the frame of the Earth, the particles also move like an harmonic oscillator, besides getting closer and closer.

In general relativity, if a volume of particles moves unrestricted through spacetime, is their volume always conserved?

Say we let a collection of particles at rest wrt each other, fall freely in a gravitational field. Will tidal forces keep the volume they occupy constant? My intuition says yes, but how do we prove that?

The other two answers have already supplied two counter examples. One of the counter examples is a volume with a hole in it, where an attractive mass is inside the hole.

The other counter-example provided can be thought of as a long thin cylinder that is inside a slightly wider cylindrical hole drilled all the way through the earth. The particles undergo simple harmonic motion about the center of the earth, so they can be started off in such a way that the volume compresses than expands, etc.

The proof on Baez's website that a small volume (a small blob of coffee dropped near the surface of the earth in his example) remains constant is not generally true for any volume. In his case the compression in the "width" is offset by the expansion in the "length," but this clearly does not always happen since we already saw two counter-examples.

If mass is conserved then the product of volume and density is conserved. Volume alone is not necessarily required to be conserved. 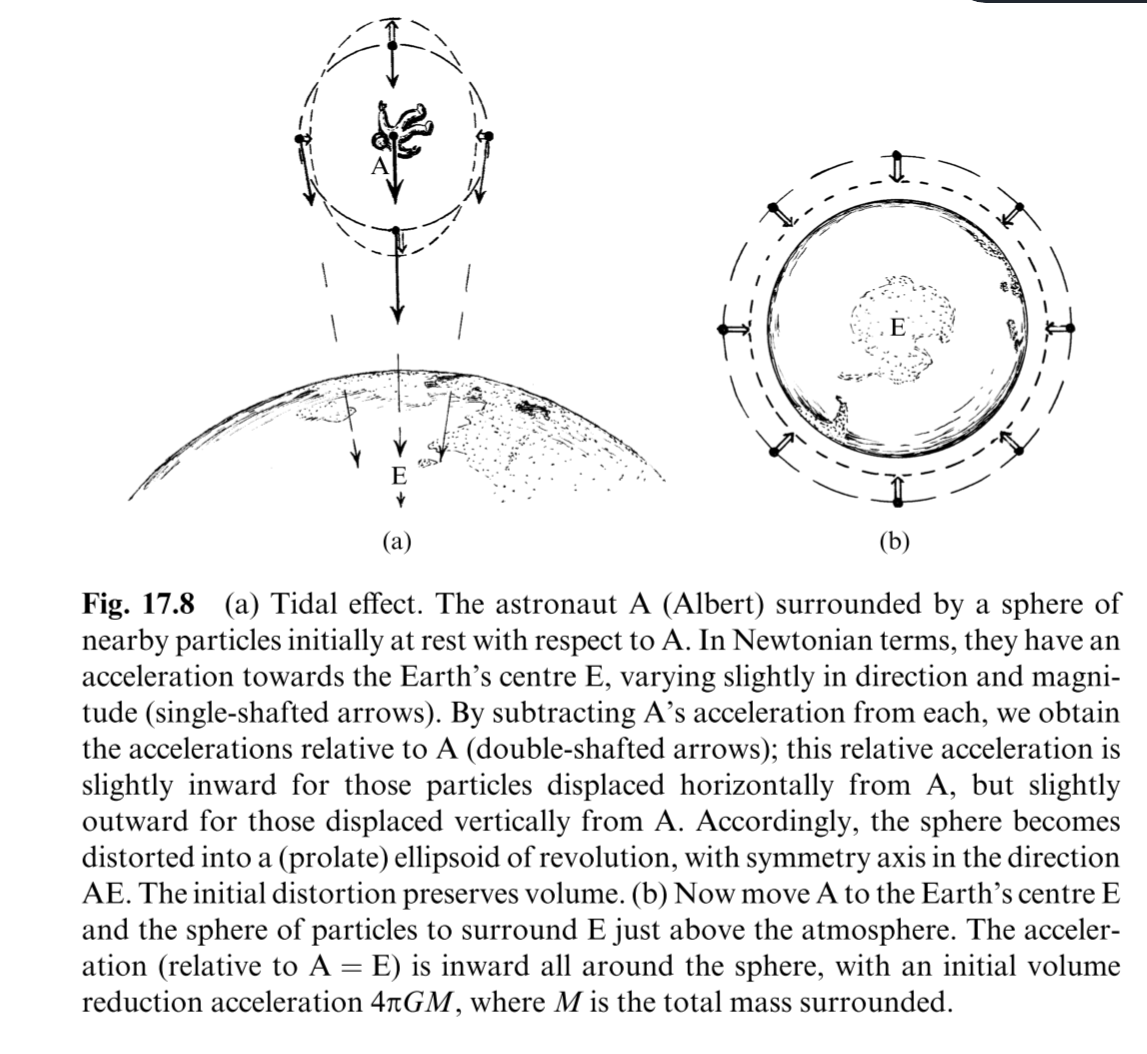 Imagine an astronaut Albert, whom we shall refer to as ‘A’, falling freely in space, a little away above the Earth’s atmosphere. It is helpful to think ofA as being just at the moment of dropping towards the Earth’s surface, but it does not really matter what Albert’s velocity is; it is his acceleration, and the acceleration of neighbouring particles, that we are concerned with. A could be safely in orbit, and need not be falling towards the ground.

Imagine that there is a sphere of particles surrounding A, and initially at rest with respect to A. Now, in ordinary Newtonian terms, the various particles in this sphere will be accelerating towards the centre E of the Earth in various slightly different directions (because the direction to E will differ, slightly, for the different particles) and the magnitude of this acceleration will also vary (because the distance to E will vary). We shall be concerned with the relative accelerations, as compared with the acceleration of the astronaut A, since we are interested in what an inertial observer (in the Einsteinian sense)—in this case A—will observe to be happening to nearby inertial particles. The situation is illustrated in Fig. 17.8a. Those particles that are displaced horizontally from A will accelerate towards E in directions that are slightly inward relative to A’s acceleration, because of the finite distance to the Earth’s center, whereas those particles that are displaced vertically from A will accelerate slightly outward relative to A because the gravitational force falls of with increasing distance from E. Accordingly, the sphere of particles will become distorted. In fact, this distortion, for nearby particles, will take the sphere into an ellipsoid of revolution, a (prolate) ellipsoid, having its major axis (the symmetry axis) in the direction of the line AE. Moreover, the initial distortion of the sphere will be into an ellipsoid whose volume is equal to that of the sphere. ... It should be noted that this volume preserving effect only applies initially so.

19
Why would black hole rip me apart?
1
Is the gravitational tidal force equivalent to expanding space?

5
A flyby of orbiting supermassive black holes
4
Does or should the metric expansion of space imply a locally observable increase in kinetic energy?
1
What am I missing in this thought experiment about a black hole?
5
Comoving system of expanding or collapsing dust-like particles
22
When an object crosses a black hole event horizon, does the entire object cross the event horizon "all at once?"
1
Worries about the equivalence principle