Can we tell on which side of a lens an image appears?

Using only my eyes and no other tools, is it possible for me to tell whether the image of the lens is real or virtual?

The image is like a copy of the object (with appropriate scaling) at the location of the image. In particular, it produces the same depth cues as a real object would. If you can see both it and the lens with both eyes, simple binocular depth perception will tell you if it's in front or behind the lens. Another form of depth perception comes from motion (and works with only one eye): if you move your head a little, an image in front of the lens visually moves more than the lens, which moves more than an image behind it. Note that you can also get an image that forms behind the point where you view it, in which case it appears to be "further than infinitely far" and moves the "wrong way" in terms of parallax.

The visual system instinctually understands all of these depth cue, though binocular vision is usually primary. That last point is an issue: lenses are usually too small to get good binocular parallax, so your visual intuition may be confounded. If you're good at controlling your eye's focus, I suspect that's the best way.

As a test, if you take a collimated beam of light and focus it with a lens, you should be able to judge the real image as a dot of light that hangs in midair in front of the lens.

Yes, as shown below. 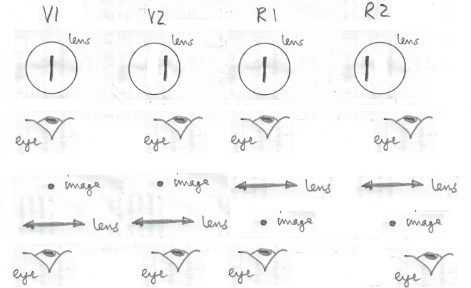 Moving the eye to the right shifts the virtual and real images in opposite directions relative to the lens.

Not the answer you're looking for? Browse other questions tagged optics refraction geometric-optics lenses perception or ask your own question.

0
Image formation by a convex lens without a screen
2
Seeing virtual image in convex lens of object kept beyond focal point
1
How does a diverging lens in a Galilean telescope form an image at infinity when its object is at its focal plane?
6
Is real image formed by a single optical element always inverted and virtual image always erect?
4
Why do we see a blurred image when the screen is not placed at the position where the image is formed by a convex lens?
0
Why does a converging lens create an upside down virtual image with an object further than the focal point?