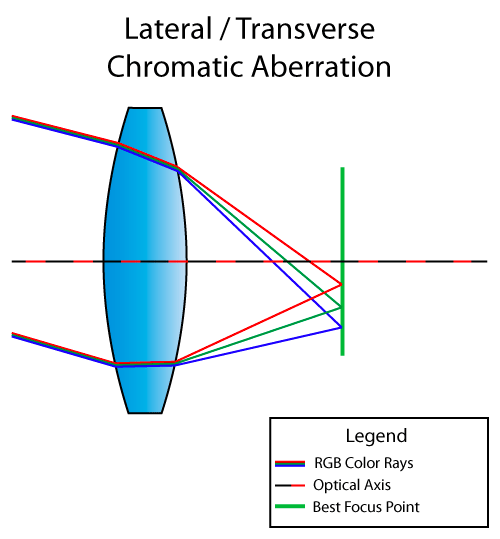 Here the focal point for red light is shifted closer to the optical axis and the focal point for blue light is shifted farther from it. This looks wrong to me since it requires blue light to be refracted less than red light in the bottom part of the lens. If lateral aberration is a result of the difference in refractive indices for different wavelengths then it should be possible to recreate the effect in a simple simulation. So I wrote one and it produced the expected result 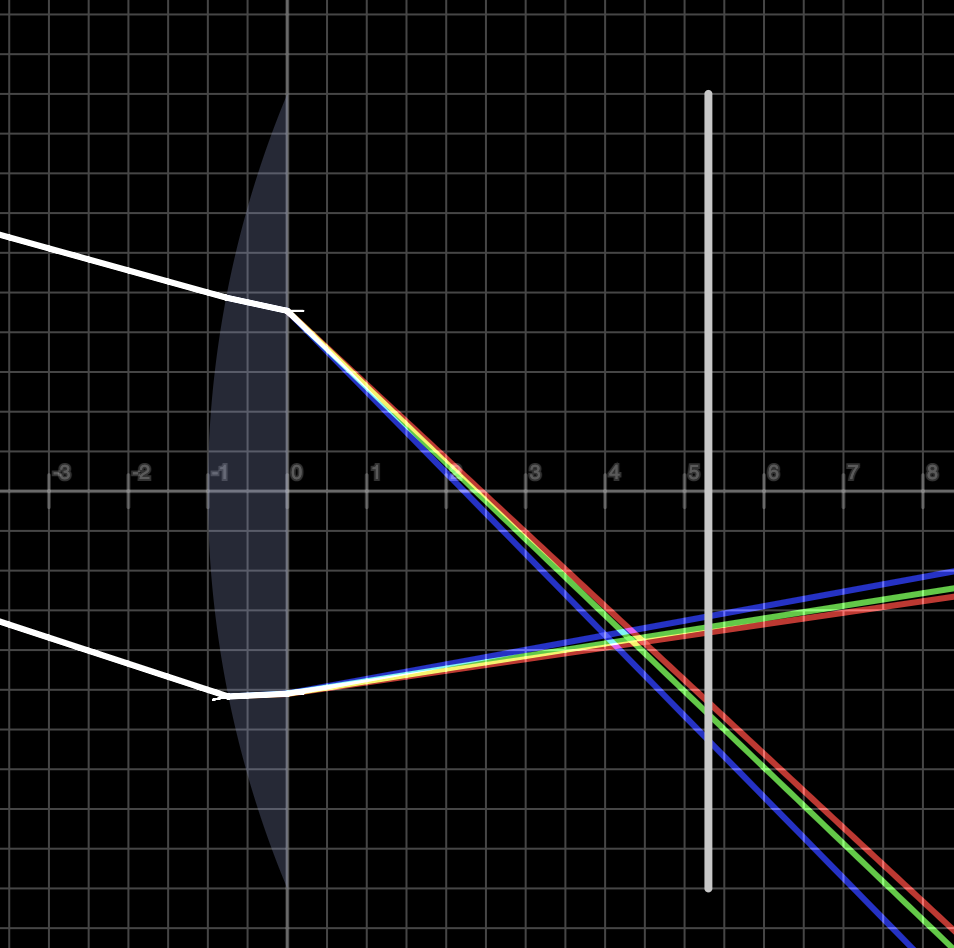 Here blue light experiences more refraction than red light on both sides of the lens. So it doesn't look like the first picture. In fact, it looks almost like a longitudinal aberration. It would produce a visible effect of a rim around objects viewed through the lens, which is not the effect associated with lateral chromatic aberration. What am I missing here?

As JB2's explained in their answer lateral chromatic aberration depends on aperture stop position, which I originally didn't include in the simulation. So below are some screenshots of the simulation with added aperture. There seem to exist a certain distance between lens and aperture stop at which the effect can be seen. I also increased the number of rays traced from the point:

optics refraction geometric-optics lenses
Share
Improve this question
edited May 17 at 10:39
Yehor Manevych
asked May 15 at 16:42

You are correct that the first picture is wrong. For a single refractive lens, the lens power will be greater for blue light, compared to red. Hence the focal length will be shorter. You are on the right track, in that your 2nd picture is evidence of longitudinal chromatic aberration.

If you move the aperture stop in front of the lens, then the bundle of blue rays and the bundle of red rays hit the lens away from the optical axis. They now are refracted in different directions: The blue bundle, and the blue chief ray is refracted more due to the higher refractive index. The red bundle of rays, and the red chief ray, is refracted less. For a positive singlet, with the stop in front of the lens, the blue bundle will focus closer to the axis at the image plane than the red bundle.

As a complication, both colors will not be properly focused off-axis. This is due to off-axis aberrations. The lateral color and longitudinal color get mixed in also. A lens design program can help pull out the effects of one aberration vs. another.

1
how to trace light after refraction by a camera lens?
0
How is aperture stop determined for a microscope?
1
Spherical lens ray-tracing simulation is not focusing rays
1
Can we see through the central obstruction of a lens?
3
Focusing white LED light into a spot as small as possible
0
Can a single optical device converge as well as diverge a parallel beam of light?
1
Understanding details of the chromatic aberration depicted in this simulated image from NASA