Can Jupiter turn into a star if it radiated off enough heat?

Since a star heats up when it radiates more heat (via gravitational compression), and since that's also how protostars turn into stars, I was wondering what are the chances of Jupiter reaching the point where nuclear fusion kicks off within it given that it survived long enough?

The smallest objects (given an elemental abundance mixture appropriate to a giant planet like Jupiter) that can attain hot enough interiors to ignite a sustained thermonuclear reaction are about 13 times that of Jupiter. The fusion reaction in question is that of deuterium, which burns at lower temperatures than "normal" hydrogen. The equivalent mass for hydrogen (protium) ignition is about 75 times the mass of Jupiter.

Jupiter is therefore nowhere near massive enough to instigate nuclear fusion reactions in its interior.

The question arises - why cannot Jupiter simply contract until its core becomes hot enough to ignite these reactions? The virial theorem tells us that any contraction will be associated with half the gravitational potential energy being radiated away and half being used to heat the interior.

The answer is degeneracy pressure. The electrons in Jupiter's deep interior are dense enough to form an increasingly degenerate Fermi gas. This Fermi gas exerts a pressure that is almost independent of the temperature. This means that as Jupiter radiates away its interior heat, the pressure hardly diminishes and as a result any contraction of Jupiter is rather small and slow and will not lead to any significant temperature increase. Ultimately, Jupiter will attain a "zero temperature" configuration that is not much smaller than it is today and could cool at nearly constant radius. At no point will it ever become hot enough to ignite nuclear fusion. This is the basic reason for the mass limits quoted above.

I found the following plot in Fortney et al. (2006) which shows this general behaviour. These are model calculations of the evolution of radius (in Jupiter radii) for a Jupiter-mass planet either with (dashed lines) or without (solid lines) a solid core. The different colours represent different distances from the parent star (to account for the effects of insolation). The appropriate curve for Jupiter is between the 1 au and 9.5 au curves. What this shows is that the rate at which the radius gets smaller decreases with time (note the time axis is logarithmic). 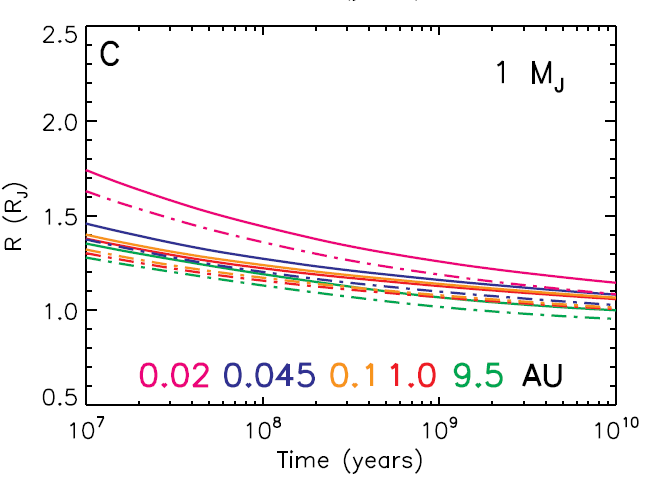 No. It lacks sufficient mass. Stellar ignition requires a mass of 6-8% of 1 solar mass. Or 70-80 times Jupiter's mass

Stellar ignition is a very complex matter since it relies on quantum tunneling.

It is not an on/off state - ie you add one gram and then, boom, it explodes into a star.

The higher density you get, the higher pressure/temperature you have in the core and the more probable the occasional fusion of two atoms is. At some point, it becomes a continuous process and you have a star.

13 times the mass of Jupiter is the limit required for a continuous deuterium-deuterium fusion - this is a brown dwarf.

80 times is what is needed for the real deal (proton-proton reaction).

Jupiter's mass should be enough for deuterium-tritium fusion - the only problem is that these are quite rare and do not last. So there is probably already some fusion in the core.

Not the answer you're looking for? Browse other questions tagged nuclear-physics astrophysics stars fusion jupiter or ask your own question.

52
Can Jupiter be ignited?

52
Can Jupiter be ignited?
28
Is Jupiter a failed star?
9
Why is planet CFBDSIR2149-0403 hot?
16
Where does the energy produced by fusion come from?
9
Can a planet form before the parent star ignites?
1
If planet like Jupiter is massive enough to hold hydrogen with its gravity is it bound to become a star?
6
Let's make Jupiter a star
14
Mining a neutron star -- what do you get?
6
A question regarding water and a possible proton-proton chain reaction