About the non-intuitive announcement at 12 May 2022 of the EHT team that spin axis of Sgr A* Black Hole facing Earth?

What is this all about?: At 12 May 2022 at the ESO official announcement live streaming event the EHT representatives claimed that the Sgr A* BH accretion disc spin axis is sort of facing Earth's position thus BH spin axis possible not perpendicular to the Milky way galaxy accretion disc?!

Also here the explanation given: https://www.youtube.com/watch?v=rIQLA6lo6R0&t=6980s

This if true, is an unexpected result and raised a lot of eye brows!!

I am not satisfied from the given explanation.

Are there any alternative explanations?

I think what you mean is that the spin axis of the black hole is not aligned with spin axis of the Milky Way? NB: That's about all you can say - the conclusion of the actual science paper (Akiyama et al. 2022, ApJL, 930, L12 is:

Our model comparisons disfavor scenarios where the black hole is viewed at high inclination ($i > 50^{\circ}$),

not that it is pointing towards us (which would be $i=0$ and highly improbable even in a statistical sense). The current analysis also fails to identify any preferred position angle of the rotation axis.

I have not watched the video to see whether they really claimed the spin axis points towards the Earth. I doubt it, and the published papers don't support that conclusion (though it is possible). Previous work on Sgr A* using infrared interferometry to monitor gas orbital motions within a few Schwarzschild radii of the black hole had already suggested that it had a low inclination (Gravity Collaboration 2018).

There isn't really any reason that the black hole spin should be aligned with the Milky Way angular momentum. When you look at the dynamics of things near the centre of the Milky Way they are not distributed in a uniform disk-like way. The stars that are immediately orbiting the black hole (which have now been studied for decades) have what looks to me like a random orientation in space$^1$. e.g. (from https://www.eso.org/public/images/eso1825d/). 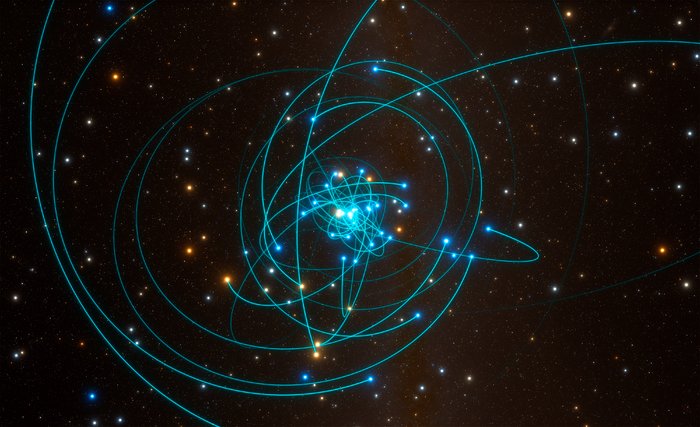 Murchikova et al. (2019) show (reproduced below) the orientation of various other complex structures in the central $\sim 2$ pc of the Milky Way. They have a variety of orientations and none really lie in the galactic plane (perpendicular to the screen with the yellow line marking the position angle). 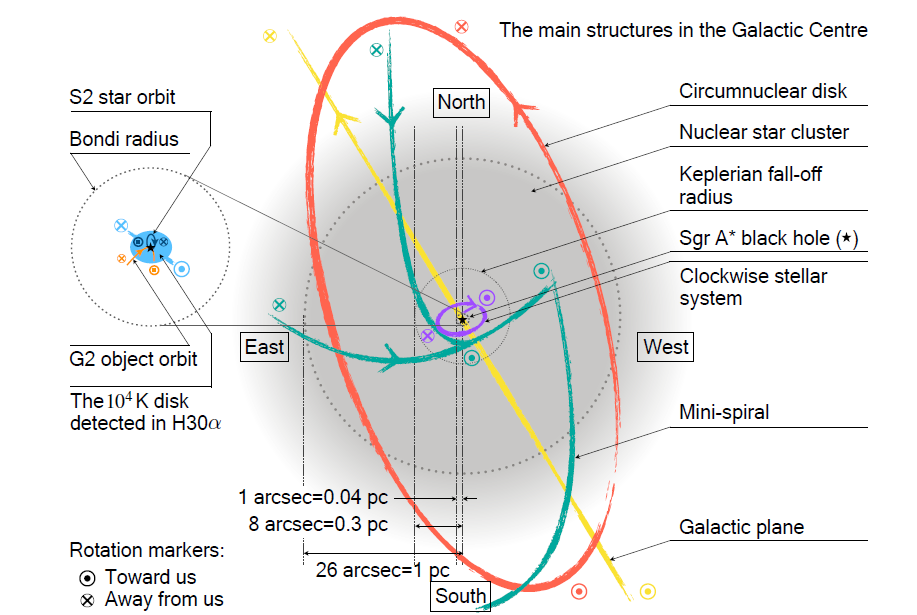 Indeed in a more recent paper (Murchikova et al. 2022), an accretion flow fed by multiple stellar sources is found to describe the sub-mm emission best. The final conclusion of that paper is important to the discussion here:

Thus, a key property of our Sgr A* wind-fed models (and thus by inference the Galactic Center accretion flow itself) is that the gas does not circularize at large radii as discussed in Ressler et al. (2020). If the parcels of plasma in the inner tens of rg do indeed have the broad distribution of angular momenta (i.e., inclinations and eccentricities) that results from stochastic feeding by multiple wind sources rather than the narrow distribution provided by a torus, then certain properties of the accretion flow may never match models that consider only torus initializations.

$^1$ In fact Ali et al. (2020) have shown that the galactic centre stars currently orbiting the black hole tend to fall into two groups. Both have close-to-edge-on orbits, but their position angles are at right angles to each other and are at 45 degrees to the galactic plane. i.e. Their orbital planes are also not aligned with the Milky Way disk.

This recent Nature publication seems to contradict the EHT claim in their presentation about the orientation of the Sgr*A BH accretion disc plane relative to the Galactic plane.

Seems to me that gas accretion disc of BH is in the same plane with the galactic plane (see fig.2 red circle on yellow line):

The Authors in the Nature paper consider also cooler gas circulation on the accretion disc of the BH extending it therefore to a radius of 26 arcsec compared to the 52 micro arcsec of EHT image but I cannot imagine why the near field part of the accretion disc should spontaneously change orientation and misalign itself from the rest?

Not the answer you're looking for? Browse other questions tagged black-holes astrophysics astronomy galaxies milky-way or ask your own question.

0
How certain we are that the body shown in the picture of EHT is a black hole?