Invariance of spacetime interval by Schutz

I am reading the book on General Relativity by Bernard Schutz. In it he proves the invariance of the interval in special relativity using the following argument.

$S^2=0$ for all light-like paths. This directly follows from the postulates.

Here is the material for this proof in case I understood the proof wrong: 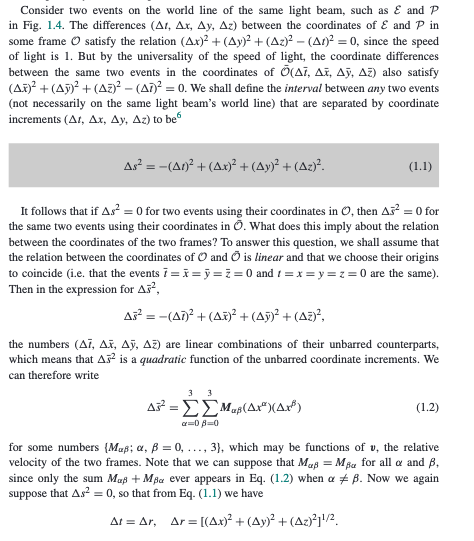 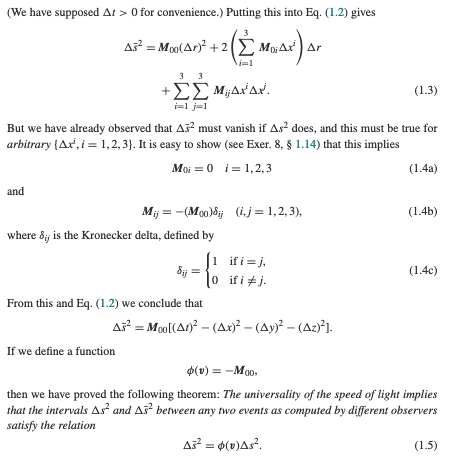 He then goes to argue that $\phi(v)=1$ but that is not relevant here.

I would suggest you read Landau & Lifshitz argument for invariance of $ds^2$, particularly the Wikipedia link because it states clearly the theorem which is being proved, and it fills in a few steps which Schutz skips/leaves as an exercise.

No, that's not the definition, nor the assumption. We're starting with two Lorentzian inner products, let us denote them as $g$ and $h$ (i.e they are bilinear forms; they eat two vectors $v,w$ as input and output real numbers $g(v,w)$ and $h(v,w)$ respectively; and they do this in a bilinear fashion... also they have "Lorentz signature"). Consider the following two statements:

The first statement is absolutely trivial from the definitions, simply because $C\neq 0$, and as a result, $g(v,v)= Ch(v,v)=0\iff h(v,v)=0$. However, the statement Schutz (and L&L in the other link) are making is the second statement (the converse), and this is not an obvious assertion (well to L&L it is).