Is work done by torque due to friction in pure rolling?

This question has been asked and answered numerous times. I went through almost all of them and found no consensus. I found that all of the answers can be divided into two categories:

The first argument feels sketchy because derivation A is wrong, B does not seem rigorous and C offers none.

The second argument makes sense but reason varies depending on who is answering. I also would like to point out that the force of friction creates a torque which rotates the body about the Centre of Mass and hence does rotational work.

EDIT: I did not find any of the answers completely satisfactory. I thought for a while and came to a conclusion which I think satisfactorily provides and answer to this question and have added it as an answer.

We have three ways of analyzing work done by friction.

In this case friction will do negative work due to translation (friction is upwards, translation displacement is downwards)

Which answer is correct?

The second answer is correct*.

For some reason, friction tends to mentally twist people in knots. It is just an ordinary mechanical force and obeys all of the usual rules that mechanical forces obey. I am going to focus on the instantaneous rate of work, called power.

For any mechanical force $\vec F$ the mechanical power delivered to a system by that force is $P=\vec F \cdot \vec v$ where $\vec v$ is the velocity of the material of the system at the point of application of $\vec F$. This one simple rule applies to all mechanical forces including friction.

So consider the static friction on a wheel rolling down a hill without slipping. The point of application of the force is the contact point with the ground. Since at that point the velocity of the material* is $\vec v=0$ the power is also zero.

Now, consider the static friction acting on a box in the bed of a truck while the truck is accelerating. In that case $\vec F$ and $\vec v$ are both non-zero* and are pointing in the same direction, so $P$ is positive and the static friction force is therefore doing work on the box.

Friction is just an ordinary force following all of the standard rules of forces. It can do work or not do work depending on the situation, particularly the velocity of the material at the point of contact.

*In the frame of the ground

If the answer is second, how do you explain the work done by torque due to friction in rotating the body?

This is a very interesting question and deserves a bit of dedicated attention. There are three main conserved quantities in mechanics: energy, momentum, and angular momentum. Each of these quantities is separately conserved, and none of them can be converted into any of the others.

Work is clearly done. The body speeds up and spins faster.

First torque is the result of two parallel forces displaced sideways from each other. See Toppling of a cylinder on a block for more.

One force is the component of gravity parallel to the slope. It passes through the center of mass of the body. The other is friction at the point of contact.

Gravity does the work in this case.

Friction does no work here. $W = Fd$, and $d = 0$. There may be some confusion about the point only being in contact for an instant. But the result is the same for a tank rolling downhill on treads.

Consider a similar problem. A massive pulley has a cord wrapped around it with a weight hanging on the end. As gravity pulls the weight downward, the pulley spins faster and faster.

In this case, the center of mass of the pulley stays still. Gravity does no work on the pulley.

Setting the second Newton's law of the situation, and using the definition of work:

The net force for rolling without slip in an incline is $mgsin(\theta) - f_f$, where $\theta$ is the angle of the incline with the ground, and $f_f$ is the friction force on the roll.

$$mgsin(\theta) - f_f = m\frac{dv_c}{dt}$$ where $v_c$ is the velocity of the center of mass of the roll. If we multiply both sides by the infinitesimal displacement of the COM $dx_c$, where the axis $x$ has the direction of the incline:

The problem with this derivation is that the change of kinetic energy ignores the rotation of the roll. The equation would be fine if the object only slipped.

Due to the torque with respect to the COM:

Multiplying both sides by $dx_c = Rd\theta$, we can let at the left side only the gravitational force:

So, the work of the gravitational force alone (in the direction of the incline) equals the total change of the translational and rotational kinetic energy. There is no work left for the friction force.

Consider a rigid body rolling down an incline in Figure 1. Two approaches are used: (1) considering the point where the body contacts the incline and (2) considering rotation with respect to the center of mass. Note that torque and angular momentum depend on the point about which they are evaluated, which is a different point for the two approaches.

Approach 1 Considering the point where the body contacts the incline: pure rolling

Q is the point where the body contacts the incline. Friction acts at point Q , and for pure rolling Q is instantaneously at rest. Using the earlier answer by @Dale, the work done by force $\vec F$ is $\int_{}^{} \vec F \cdot d \vec r$ where $\vec r$ is the path; this can also be expressed as $\int_{}^{} \vec F \cdot \vec v dt$ where $v$ is the velocity. At point Q, $\vec v$ is zero and friction does no work. With respect to point Q, there is no torque from the force of friction, and the force of gravity provides the torque to rotate the body.

Approach 2 Considering rotation about the center of mass: pure rolling

Many standard physics textbooks address this problem by segregating the motion into (1) translational motion of the center of mass (CM) plus (2) rotational motion about the CM. Using this approach, the force of friction contributes to both (1) and (2). The work by friction for (1) is $-\int F_{fric} dx$, negative since friction opposes the x motion down the plane; the work done by friction for (2) is $\int \tau_{fric} d \beta = \int F_{fric}R dx/R$, where $d \beta = dx/R$ with no slip. ($\beta$ is the angle of rotation with respect to the CM; $\omega = {d\beta \over dt}$ where $\omega$ is the angular speed of rotation with respect to the center of mass.) The first term decreases the kinetic energy of the CM and the second term increases the rotational energy about the CM, but the sum of the terms is zero. Therefore, using this approach we also see that (net) work done by friction is zero. With respect to the CM, the force of friction provides the torque to rotate the body, and the force of gravity provides no torque. With this approach, torque due to friction does work but considering the work from friction on translation of the CM the total work from friction is zero.

Now, consider the case where the rigid body slips. See Figure 2. First, we need to recognize that there are no "heating" effects from friction acting on a rigid body. There can be no change in the internal energy of a rigid body since the positions of the particles in the body with respect to each other do not change. Therefore, even for rolling with slipping no heating occurs. (In the real world heating does occur.)

Approach 1 Considering the point where the body contacts the incline: with slipping

Approach 2 Considering rotation about the center of mass: with slipping

A detailed evaluation yields the same results for the motion and for the work done by friction using either of the two approaches. 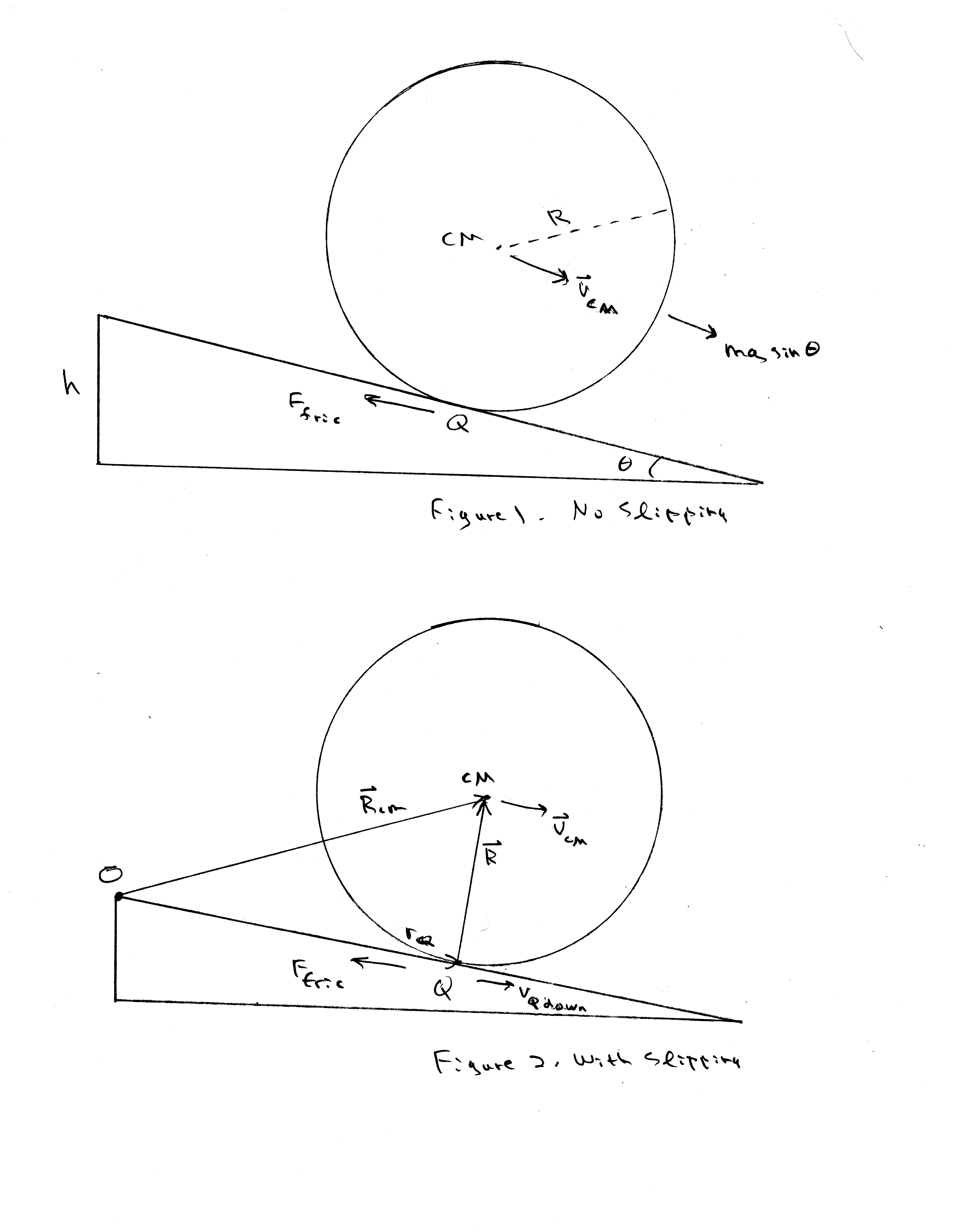 There are numerous variants of this question on stack overflow namely: 1, 2, 3 , 4, 5. In this post I want to collect all those posts together and attempt to resolve this question. I have also attached a link to an excellent post by John Darby on this topic below.

I have received 5 answers to my question, but none of them really felt correct:

I thought about the question for a while and came to realisation that the question can be answered by a modified form of Sabat Anwar and John Darby's answer.

Let us take the point of contact of the rolling disc/sphere/cylinder as $Q$. The instantaneous displacement of this point can be divided into two parts: 1) $\vec{X_{Q_T}}=\vec{X_{CM}}$ due to translational motion of the body, and 2) $\vec{X_{Q_R}}=\vec{\theta}\times\vec{R}$ do to rotation of the body. 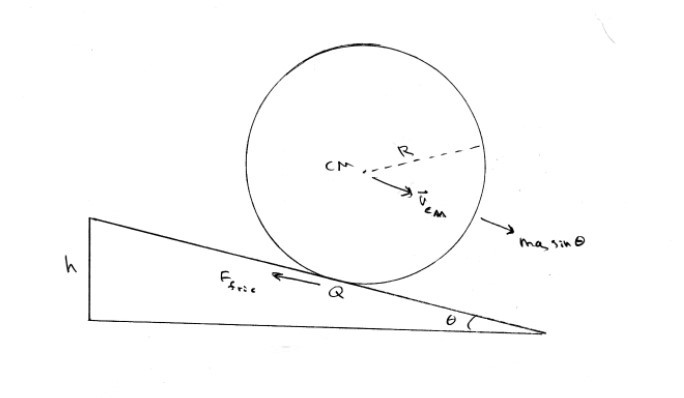 From this there are two ways to answers by work done by friction is $0$:

Not the answer you're looking for? Browse other questions tagged newtonian-mechanics rotational-dynamics work friction rigid-body-dynamics or ask your own question.

11
Is work done in rolling friction?
4
Rotational work and forces such as static friction or ropes tension
0
Pure rolling and friction
19
How can friction do no work in case of pure rolling?
0
Rotational Work done by Friction
1
Work of friction on rolling objects
3
Pure Rolling Motion
2
Confusion about friction during pure rolling