How does current flow when two charged spheres are connected by a wire? 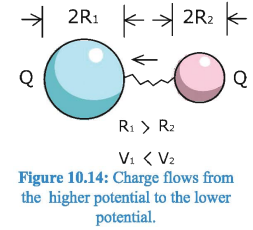 After we connect the two spheres by an uncharged conducting wire, current flows from higher potential to lower potential. The charges redistribute themselves to achieve an equipotential surface: after equilibrium is reached, the electric potentials of the pink ball, blue ball, and wire are equal. It's more appropriate to view the three objects, the blue ball, the pink ball, and the wire as a singular object after the balls have been connected by the wire. In this scenario, however, the conducting wire also becomes charged after equilibrium, even though it was uncharged initially.

But the idea behind this experiment is to consider a wire with infinitly small diameter, so the charge inside the wire can be neglected, because charges confined in a small volume would create a high electrical potential and we wouldn't be in equilibrium.

Not the answer you're looking for? Browse other questions tagged electromagnetism electrostatics electric-current charge potential or ask your own question.