What are the forces acting between two air bubbles in water?

The exact question is

The chapter is about gravitation. The given answer is

A lighter body inside a denser medium behaves like negative mass as far as gravitational force is considered. Two air bubbles i.e. two negative masses will attract each other.

What is negative mass in this context and how can it be applied to such macroscopic objects? How would it result in attraction? 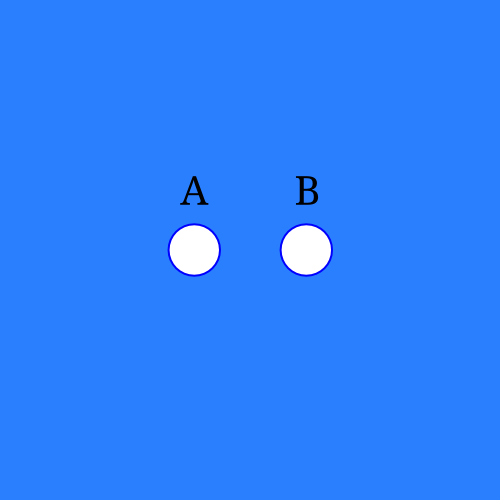 Consider the bubble A in the above image. The air particles forming the bubble A would be attracted more to the left(away from B) as there are more dense particles towards that side-the air particles making up bubble B are less dense than the medium and they will attract the air from bubble A to a smaller extent than if the volume of bubble B was filled with the medium.

A similar case would apply to B due to lesser density of particles forming A and the bubbles would be (indirectly) repelled.

So what is happening in this case?

The other way to go through this reasoning is by what has been suggested in the question, i.e. assuming the bubbles have negative mass. This solution has few steps, as following:

($M'(x) \gg m$)which is towards the center(and the other sphere). So it looks like the two spheres are attracting each other.

Now there are some ambiguities here:

Also I should point, if the bubbles get in touch; they will immediately collapse into a single bubble. This is due to the surface tension, not the gravitational effects for sure.

Maybe this plot of the gravitational field will help: 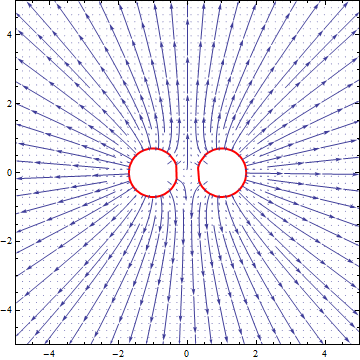 First of all you mean electric field lines, not magnetic. And yes, they do look the same because they are the same. The underlying field equations are identical (in the static nonrelativistic limit). The difference is that for gravity like charges attract whereas for electric forces like charges repel.

Maybe the plot is a little less than clear. Keep in mind this plot is the force on the fluid, not the bubbles. You were meant to take away that the fluid in between the bubbles flows out of the space and the bubbles get closer. ;)

To really do this problem properly you need some assumptions about the fluid: namely that it has surface tension to stabilise the bubbles and also that the flow is incompressible (otherwise you need to keep track of the density everywhere and it gets truly awful). You also need to put the system in a box (it can be a gigantic box - the size of it doesn't really matter in the end) just to avoid the ambiguities of having an infinite mass of fluid. Under these assumptions you can argue that the bubbles can't expand, and also any flow out of one region has to be balanced by a flow into another region.

I'm guessing you're not at the point of seeing field theory yet. Take this as an illustration that there are complicated ways of doing simple problems. The advantage of field theory is that it is much more general and powerful for other problems. But for this you don't really need it - the "negative mass" argument gives you the right answer. But this may give you confidence that the argument given about "negative mass" is correct. In fact, this is better because we don't need to invoke "negative mass" at all - we just talk about the fluid.

If you assume, based on the above, that the bubbles don't change shape or size, then you can treat the problem very simply. All you need to know is that the gravitational potential of a bubble is

inside the bubble. If you know Poisson's equation for the gravitational field you can derive this. You get the total potential by adding the potentials created by the two bubbles. You also need to know the gravitational energy a little parcel of fluid of volume $\Delta V$ is given by

where $\rho(x,y,z)$ is the density, which is constant everywhere outsite a bubble and zero anywhere inside. You add up the energy for every piece of fluid ("do an integral") to get the total energy, and see if it increases or decreases with respect to increasing the seperation between the bubbles. The system will naturally go in the direction that decreases the total energy.

So what does the energy look like? Here (energy units are arbitrary, length units are in bubble radii): 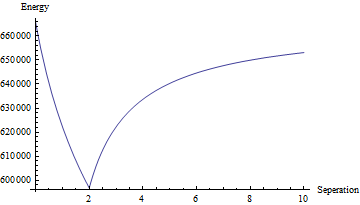 The fact that nearly the same calculation done for electromagnetism gives charges which repel each other is an interesting and important clue to the difference between the two theories. If you are really super keen you might have a go at that problem one day.

I think I see the argument:

One should go to the line joining A and B. And draw two vertical tangent on the right for A and on the left for B. There is more water volume to attract the water in the region on the left of A, so there will be a force towards B, and vice versa.

Anyway bubbles in liquids are not a simple matter like your problem states.

What is negative mass in this context

Consider a single bubble in the middle of a glass of water on your desk.

Normally, gravity pulls air above the desk downwards towards the desk surface.

In fact the air does not have negative mass and is not repelled but the real situation is more complex to describe.

Here's how I look at it:

When you 'release' the air bubbles, they tend to rise due to the buoyant force, $\rho_wgv$. Thus, they are in motion relative to the static fluid. Assuming that the air bubbles are spherical, then in their motion they change the pressure of the water (i.e. the streamlines of water are closer together). Now since we have 2 air bubbles, the area in between them is affected by the motion of both bubbles, and the streamlines are further compressed. This results in lower pressure in the area between the bubbles relative to the pressure on the left of A and the right of B. Thus the air bubbles are 'pulled' toward each other. This is similar to the Venturi Effect.

I'm not sure whether we are to assume that the bubbles are in motion or if they are being held fixed, but if they are indeed fixed, then here is an experiment to try:

Imagine a(n) (infinite) universe that is completely filled with water. Water as far as the eye can see. You can intuitvely guess that the force on any water molecule is 0, because it is drawn toward every other water molecule (in every direction) in the this universe. Now, let's say there is a void in this water universe. A spherical region where no water exists. Now imagine a 'test particle,' with mass $M$, and calculate the gravitational force in the direction away from the center of the circle. Assuming that there is a linear density in the water, such that each unit of distance $r$ contains a mass $m$, the force in that direction is: $$GMm\sum\limits_{i=0}^\infty \frac{1}{(0.5+i)^2}\approx\left(GMm\right)*4.9348$$ 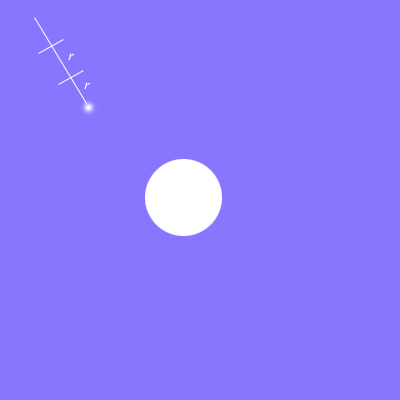 Because of the void in the opposite direction, the force in that direction is less than what we calculated above. So the net force is away from the void. In fact, a test particle placed anywhere near this void will experience a net force away from it!

What that implies is that the water is pushed away from the void in all directions. This leads me to believe that the void (AKA bubble) would actually expand to occupy the space left behind by the water.

Now imagine two voids. The force field looks like what Michael Brown has posted. Since the water is pushed away from the two bubbles, the question is what does it leave behind? It looks as though the two bubbles expand until they become one big bubble (which is also expanding). Any way you look at it, the bubbles combine into one.

Not the answer you're looking for? Browse other questions tagged homework-and-exercises newtonian-gravity or ask your own question.

1
Can the mass of air bubble in material medium be considered negative?

11
Acceleration of two falling objects with identical form and air drag but different masses
1
Thought experiment-shell theorem
13
Gravity - What happens when two objects of unequal masses fall freely towards the ground? (Revisited)
0
Solar vs lunar gravity: inverse square law
79
If dark matter only interacts with gravity, why doesn't it all clump together in a single point?
1
Confusion about gravity
0
If a satellite had a huge permanant magnet, how long (if at all) would it take for the other satellites to move towards it?