In an expanding universe, can two people communicating to each other about their cosmological horizons get around their horizon limit?

I want to pose a preamble question that I will answer first to build up to the main scenario. Then I will pose the main question. The main question concerns the special case of an expanding universe specifically. I explain this in more detail in the Main Question section.

Consider the case where the universe is Euclidean and static (so we are considering Minkowski spacetime with a cutoff at a beginning at $t=0$). Suppose we have two people $A$ and $B$ (each with a telescope) located at two different points in space. At every time $t$, both people have a cosmological horizon of radius $r = r(t)$. Since the two people are at different points in space, there is a direction in which the horizon of person $B$ extends past the horizon of person $A$. See the picture below. 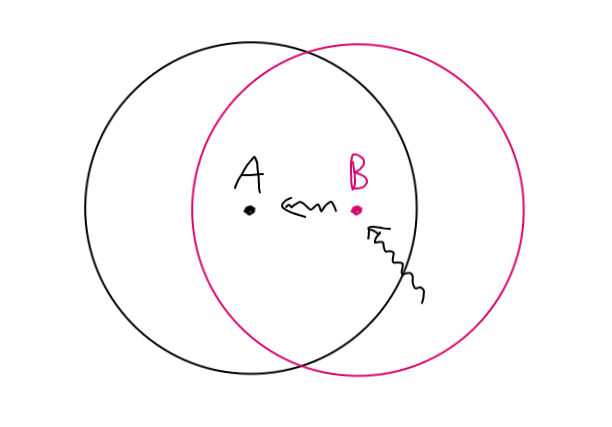 Therefore, by the time person $B$'s signal successfully gets to person $A$, $A$'s horizon would have expanded to the point where the once inaccessible region is now within $A$'s horizon. With this taken into account there is no contradiction.

To put it another way, if a signal can come from region $R$ to person $B$ and then another signal is sent from $B$ to $A$, person $B$ doesn't serve any purpose other than to be a "middle-man," and it would be more efficient for a signal to go from $R$ straight to $A$. In terms of kinematics of signals, person $B$ doesn't do anything other than slow the signal down ($B$ can amplify the signal strength but that isn't part of the kinematics I am considering).

Okay, with the preamble out of the way, I want to explain the scenario of the main question, which is similar to the preamble but with a twist.

Now suppose we have person $A$ and person $B$ at two different points in space with telescopes. Again, at each time $t$, there is a region $R$ outside of $A$'s horizon but within $B$'s horizon.

Now the twist: because of the expansion of space, if the region $R$ is far enough away from $B$, there is a time at which it moves to outside the horizon of $B$, and therefore it never moves into $A$'s horizon like it does in the preamble question. So now we can have light go from $R$ to $B$, and then $B$ can send a signal to $A$ to transmit info about $R$, even though $R$ never enters $A$'s horizon. Thus, $A$ manages to obtain info about region $R$, even though $R$ is always outside of $A$'s horizon.

The question is, what is wrong with this description and what is the correct way to think about this scenario?

I think the right way to think about it is to rescale space into comoving coordinates $\chi$ and time into conformal time $\eta$. That way the expansion effect goes away (hidden in the coordinates). The reason to do this is that now light cones are 45 degree cones in the $(\chi,\eta)$ plane. For sufficiently accelerating cosmologies there will be a maximal and finite $\eta_\infty$ corresponding to the infinite future.

At this point it becomes clearer why you cannot expand your horizon by asking a remote observer what they see: assuming you can get an answer, that answer will come to you along a light-beam that when received corresponds to your past light cone and hence to your horizon at that moment, yet the observer when they sent it also has a past light cone abutting the beam. There is no way of getting extra information via the observer: everything they can see and tell you about is inside your light cone. They will however eventually be able to see new things, some of which (in accelerating cosmologies) they can never signal to you.

The problem here is remembering when different pieces of information can have reached different observers. That A can tell B about something they have seen at an early time does not mean A can always tell B everything they see.

Not the answer you're looking for? Browse other questions tagged cosmology speed-of-light space-expansion event-horizon cosmological-constant or ask your own question.

12
How is causal patch complementarity compatible with behavior during inflation?
8
Gravity on supermassive black hole's event-horizon
9
Taking selfies while falling, would you be able to notice a horizon before hitting a singularity?
4
What is the meaning of the particle horizon in conformal diagrams?
3
Is Poplawski's "Cosmology with torsion" a "variable speed of light" cosmology?
1
What conceivable connection is there between the cosmological constant and radius of the Universe?
0
Could the matter for a Big Bang come from the Hawking radiation of a super fast expanding universe?
4
Is the "cosmological constant tension" the prime reason that we believe the expansion of the universe is accelerating?
0
Assuming the big rip scenario is possible, what happens exactly at $t=t_{rip}$? Is spacetime really ripped?