When two systems of forces acting on a rigid body are equivalent?

My book says that "it is clear that if you replace the system of forces with a second system having the same resulting force and the same resulting moment, with the same initial conditions the rigid body moves exactly in the same way".  Unfortunately it doesn't seem so obvious to me. Can someone help me?

I am absolutely certain that the statement is completely correct because the book is excellent. I just can't understand why "it's clear". Haven't we to prove that the resulting equations of motion are the same if you take another equivalent system of forces in the sense thus expressed? 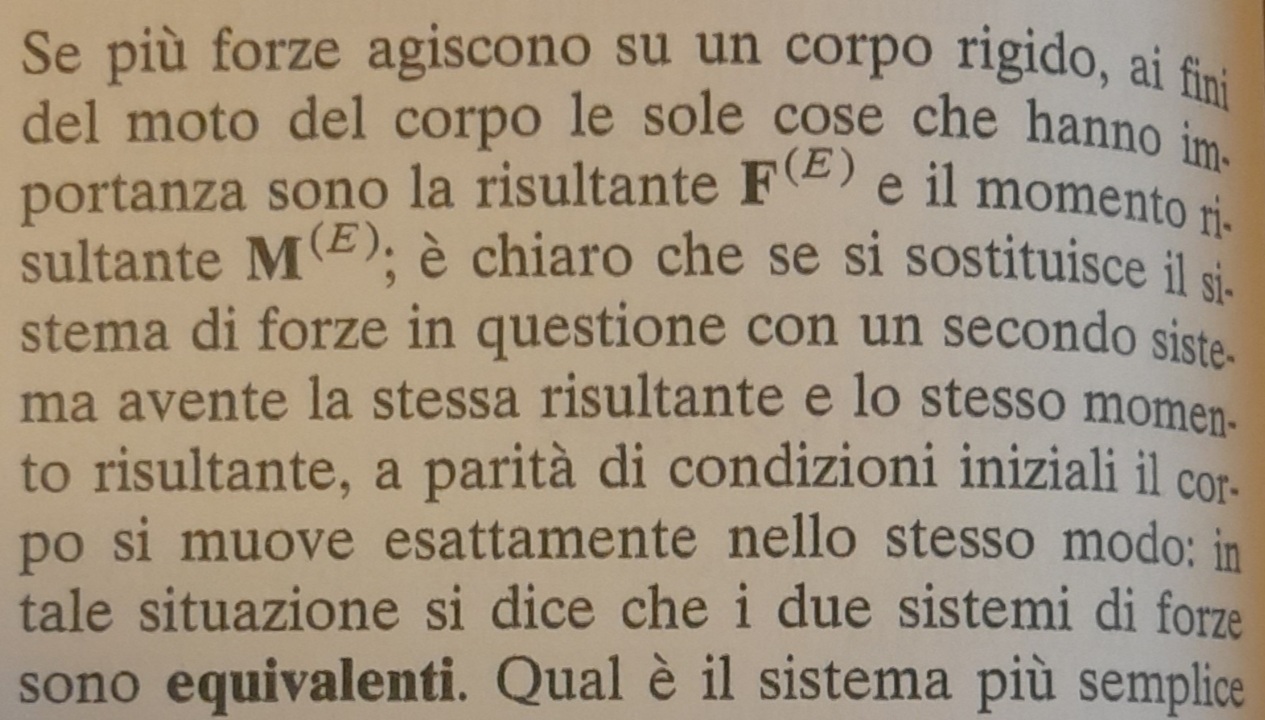 forces reference-frames torque rigid-body-dynamics
Share
Improve this question
edited May 4 at 12:33
Haumea
asked May 4 at 10:09

This tells you nothing about the actual loading on a body, just that the combined loading and moments about the COM be $\boldsymbol{F}$ and $\boldsymbol{M}_C$ respectively.

The total of 6 loading components (3 force components, 3 moment components) map to the 6 motion components (3 translational, 3 rotational) in a one-to-one mapping. This is with specified initial conditions (positions and velocities). This mapping occurs through the mass $m$ scalar, and mass moment of inertia $\mathcal{I}_C$ tensor.

The above situation leads to the following conclusions

A theorem for a rigid body is: "Every system of forces is equivalent to a single force through an arbitrary point, plus a couple (either or both of which may be zero.)".

A couple is defined as a system of forces whose sum is zero. A couple exerts the same torque about every point. The couple is characterized by a single vector, the total torque, and all couples with the same torque are equivalent.

The theorem can be proven by finding the equivalent force and couple. Let $P$ be an arbitrary point, let the sum of forces be $\vec F$, and let the total torque from the forces about $P$ be $\vec N$. Let the single force $\vec F$ act at P, and add a couple whose torque is $\vec N$; this is a system equivalent to the original system. Specifically, the single force $\vec F$ produces the same translational motion as the original set of forces, and the couple produces the same rotational about the arbitrary point $P$ as the original total torque.

Not the answer you're looking for? Browse other questions tagged forces reference-frames torque rigid-body-dynamics or ask your own question.

2
What are the forces of constraint if there are multiple equivalent constraints?
1
Rigid body: internal work null?
1
Work done by internal forces of a rigid body
0
Torque of a rigid body as point mass or charge torque
4
Rigid body dynamics derivation from Newton's laws for higher dimensions
2
Solving Rigid Body ODEs in rotating frame
0
If the net external moment on a body about a point is zero
5
Rigid body rotation apparent energy paradox
0
Torque exerted by internal forces