Interpreting stress at the ends of a bar

Consider a bar loaded in tension by distributed loads applied on its ends as shown in the figure. 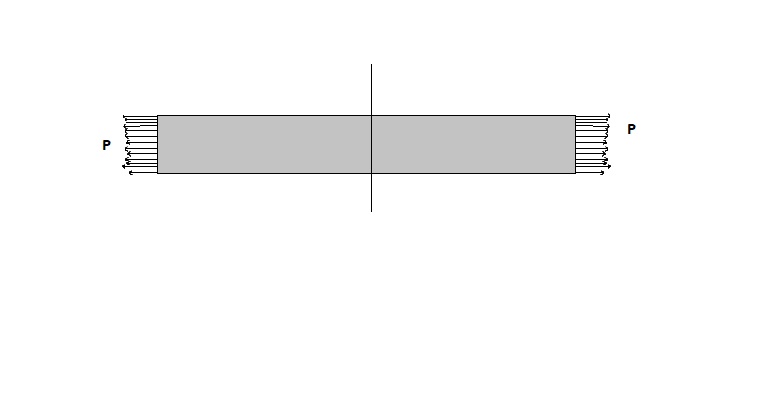 The stress at any cross section of this bar will be

If I take an element somewhere in the middle of the bar (the blue element in the fig. below), both the left and right faces of this element will be subjected to internal forces and hence stress $\sigma$ as shown 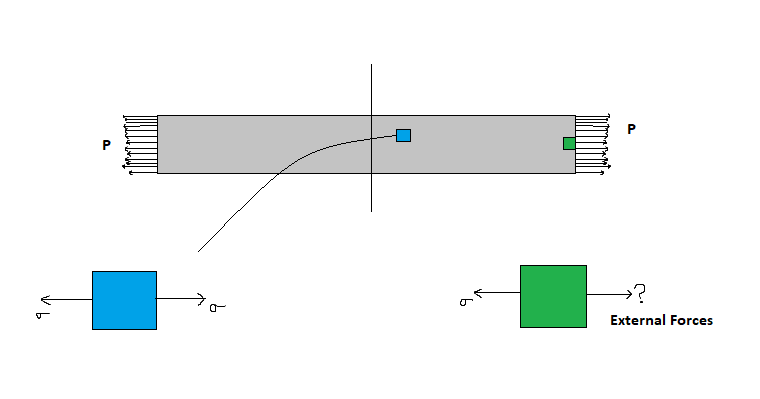 In the textbook they take an element at the ends and show that on both the faces of the green element a stress acts. But how is this consistent with the definition of stress, you cannot associate stress with an external force.

So my question is, why does the book show that on the right face too a stress acts even though clearly an external force is acting on it?

How do I interpret taking a stress element at the ends? 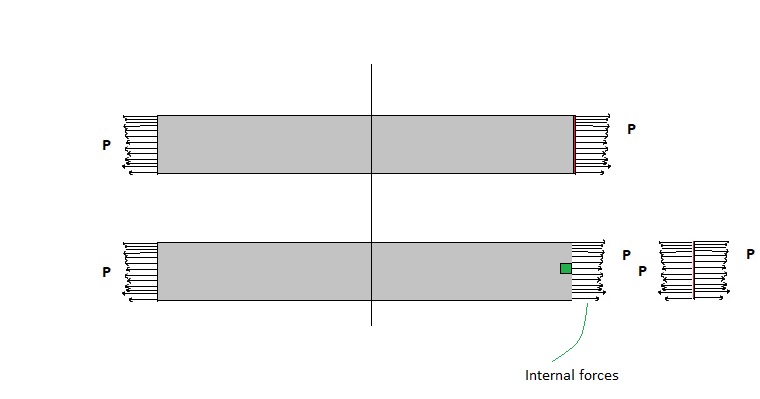 What if we remove a very thin slice of the material first (in red) and then take an element as shown in green? In this way both the surfaces of the green element will be subjected to internal forces and hence stress $\sigma$. Moreover since the red slice was very thin, we can still say that this element was taken at the end. Would that be a way to interpret the stresses at the ends on an element?

we can have a body which is acted upon by a single external force, and if the body moves, there will be no internal forces developed and hence no stress. The external force acting per unit area won't be considered as stress.

This is untrue. A single external force applied to a body accelerates it while also deforming it due to the inertia of the rest of the body, creating nonzero stress states. You can demonstrate this by applying an axial force to the middle of a loose, compliant spring; along with acceleration, you'll obtain compression on one side and elongation on the other side, corresponding to compressive and tensile stresses, respectively, in the frame of the spring. (Alternatively, if you apply a lateral force, you'll see acceleration plus cantilever bending on either side.) If you haven't been taught this formally, it could be because introductory physics and engineering dynamics classes often idealize bodies as perfectly rigid. But no real material is perfectly rigid.

Not the answer you're looking for? Browse other questions tagged tensor-calculus stress-strain solid-mechanics or ask your own question.

28
What is the difference between stress and pressure?

4
Wall stress of a hexagonal pressure vessel
2
Why are the x-components of the stress tensor ($\sigma_{xx}, \sigma_{yx}, \text{and } \sigma_{zx}$) different?
0
geometrical stress dependence for a solid cylidrical body subjected to a uniform pressure load?
15
Why is stress defined in the way as it is?
4
Intuition for Stress and the Cauchy Stress Tensor
1
Stress tensor and equality of normal stresses on opposite faces
0
The state of a Stress element isolated from a beam
1
Stress in a rigid body
0
Where does the stored potential energy in a bar go, when I reduce the load acting on it?