Can a particle move in an upward parabola fashion naturally?

I recently studied projectile motion which consists of only downward parabolas. But I was wondering whether is it possible for a particle to go in a upward parabola provided that the particle doesn't have any propellers or things like those which can artificially make it happen and assuming that air resistance is absent?

You get an upward parabola, only if you have a constant acceleration upward. This could be an electric field and a charged particle. It ist part of the way an electron moves in an oscillograph between the plates of a condensator

Does a Parabolic orbital trajectory count?

If there was a self-gravitating object at the focus of the parabola $(0,\frac{1}{8})$ with gravitational parameter $\frac{1}{16}\,D^3/T^2$, a negligible-mass particle placed on the parabola at $(0,0)$ with an initial velocity of $1\,D/T$ parallel to the x-axis would follow the trajectory provided, if no other forces besides besides the aforementioned gravitational attraction acted upon it.

If we shift the origin to put it on the focus of the parabolic trajectory, it will look like this: 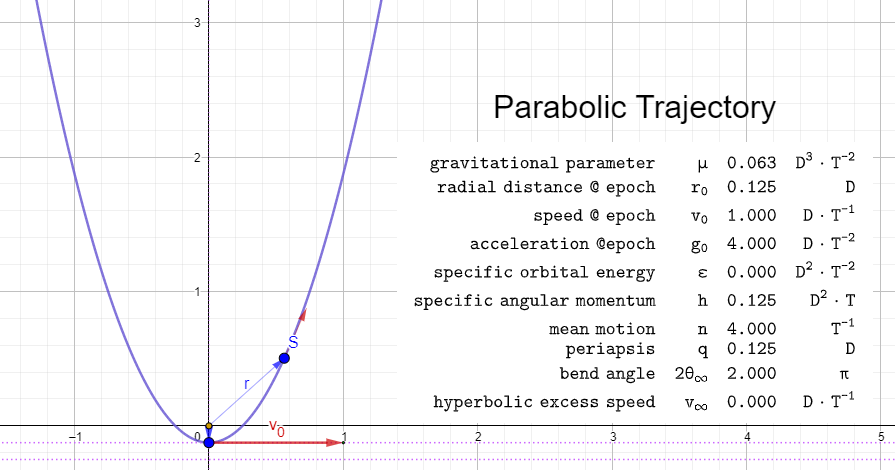 Not the answer you're looking for? Browse other questions tagged newtonian-mechanics kinematics projectile or ask your own question.

2
Real world examples for projectile thrown upwards or downwards
1
Projectile Motion with Air Resistance and Wind
5
How does an object's motion behave if dropped from an aeroplane travelling diagonally upwards?
0
Applying conservation of energy on a springs/projectile motion problem
3
Model/formula for bouncing ball
1
Falling and sliding object
4
Air resistance causing decrease in time of flight of a projectile
18
Elliptical Trajectory, or Parabolic?