I'm trying to get a more intuitive/physical grasp of the Fermi level, like I have of electric potential. I know that, for just a single piece of metal in equilibrium, you have to have the electric potential the same at all points, because if you didn't, that would mean there's necessarily an electric field between the two points, which would put a force on electrons, and move them until the field is gone.

But I can't understand the electrochemical potential in the same way. I've been looking at this picture to try and understand what happens when two metals with different work functions are put in contact with each other:

In (b), the chemical potential in the two metals have to be aligned, so for this to happen, a small number of electrons flow from the metal with the bigger work function to the one with the smaller (could you say this intuitively makes sense, because the WF is a measure of how hard it is for electrons to escape the material, so they'd rather be in a material where it's easier to escape?).

This is where my confusion is. First of all, I don't really know of a good intuitive reason why the chemical potentials even have to be the same in the two materials (like the way I mentioned above for the voltage in a regular, single piece of metal. I don't have any sort of sense like that, here).

Right now, it kind of seems like the chemical potential has some sort of "priority" -- when these two metals come into contact, why do their chemical potentials match up, and their electric potentials separate, rather than vice versa, or more intuitive to me, some equilibrium in between where they're both off? (but now I'm more confused -- according to wiki, it seems like the latter does happen, but I don't really know why. Is that a thermodynamic potential trying to minimize?)

My second point of confusion is the current that passes between and voltage that there now is across the two pieces of metal, from a practical standpoint. Wiki (above) and Ashcroft and Mermin: 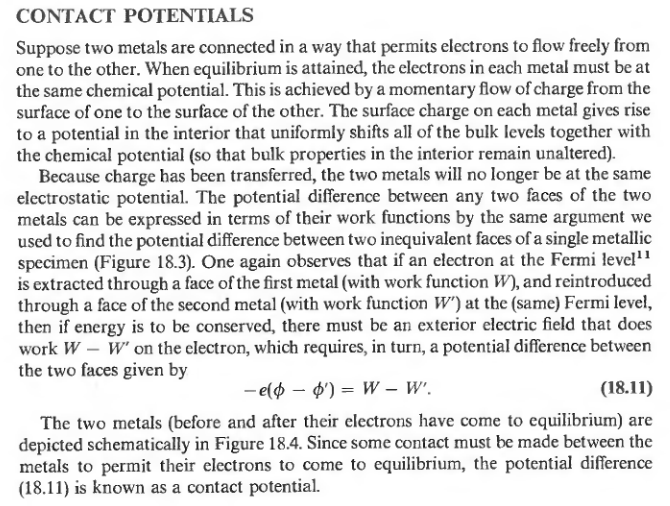 both say that there is this 'contact' potential across the metals now, but that it only drives current momentarily, and a tiny amount. So if I were to apply an increasing voltage across the metals (in either/both biases), would I need to hit a "threshold" voltage before which there would be no current flowing? How would Ohm's law work here, or would it? Naively, without applying any external bias, it seems like you have $V \neq 0$,$R \neq 0$, but $I = 0$. So should you expect anything funky when you apply external potential?

First off, you should be aware that your question is in a field fraught with inconsistent terminology. I posted a little guide on my website:

The same cannot be said of electric potential (a.k.a. galvani potential). Just because there is an electric field pointing from A towards B, does NOT mean that an electron has lower free energy at A than B. Maybe A and B are different materials, with different workfunctions, and different electronic wave functions. Maybe moving from B to A would decrease the entropy of electrons in the system (something like this happens in a p-n junction). To make a long story short, the macroscopic electric field is just one of many influences on electron motion. The electrochemical potential is the final result from adding together all these influences.

For the other question, the contact potential between two metals has no "threshold voltage", etc. It actually has no effects that you can observe at all, unless you're willing to spend hundreds of thousands of dollars on fancy scientific equipment (e.g. kelvin probe) Try it at home! Pinch a copper wire with steel alligator clips. You'll see it looks like a normal single conductor, if you have good contact.

The cause of your confusion is probably this unfortunate terminology situation. The word "voltage" can mean either "the thing you measure with a voltmeter" (which is actually electrochemical potential difference) or it can mean "the integral of electric (E) field" (a.k.a. galvani potential). After you have connected the copper and the steel, there is immediately an equilibrium, where a voltmeter will measure 0 volts, and the electrochemical potential difference is 0, even though there is a nonzero galvani potential, let's say 0.1V. What that means is that 0.1V of electric field is pulling electrons one way, and it's exactly cancelled by 0.1V of other influences pulling electrons the opposite way. When you apply a voltage, the forces become out of balance by exactly that amount. Current flows according to the electrochemical potential difference, which is the sum total of all influences on the electron motion.

Not the answer you're looking for? Browse other questions tagged electromagnetism electricity solid-state-physics or ask your own question.

10
Pn junction voltage drop?
1
What would the Fermi level be if two different metals are in contact?
0
Work function for two metals in equilibrium

2
A few questions about the Fermi Level/Energy
2
Connecting Fermi levels and band diagrams to potential diagrams?
11
Why isn't there a potential difference across a disconnected diode?
1
tranfser of electrons between two metals and a wire
1
When the potential difference between two points in a circuit is zero, why is there no electric field between them?
0
Elementary level current electricity and power transmission
0
Why do batteries need a loop to discharge?