For instance do the planets around the sun experience drag from the near vacuum of space? Or do the (hydrogen) atoms in interplanetary space have a mean velocity near orbital speeds, such that object with the roughly the same inclination would have relatively low relative velocity and thus insignificant drag? And if so would (small) celestial objects orbiting the sun in the opposite direction experience a significantly larger drag?

The solar wind is a significant component of non-orbiting particles in the solar system. It exerts a pressure on the order of nanopascals (at the radius of Earth; it gets stronger toward the Sun), which seems tiny but given that it acts constantly for millions of years is strong enough to slowly change the orbit of small bodies. Small bodies are more strongly affected because they typically have a larger cross-section to mass ratio. The effect on comets is particularly spectacular: 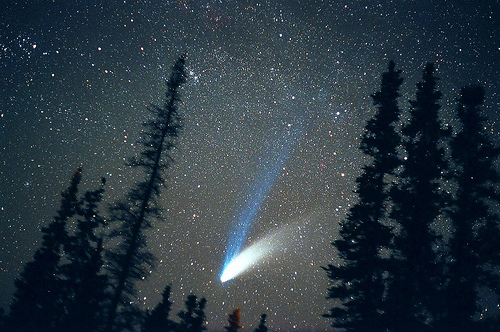 There are a couple of other sources of "friction" in vacuum. You mention gravitational waves in your question, and this effect is reasonably well covered in the answers to the question you linked. Another effect is dynamical friction. This one is a purely gravitational effect, so the term "friction" is a bit misleading. This illustration below sums up the effect nicely; as a massive body moves through a collection of other masses (could be a protoplanet moving through gas, a star moving through a field of other stars, a galaxy moving through a cluster of galaxies) it pulls some mass toward it, forming an overdense wake so that there is a net force opposing the motion.

The last effect I want to mention is radiation pressure (or photon pressure). Light actually exerts a slight pressure all on its own, which has an easily measurable effect on small solar system bodies, and is probably one of the best ways to try and save the Earth from a killer asteroid (forget nukes, use paint!). It's also the principle behind solar sails.

Following the edit to the question asking if the "near vacuum of space has a mean velocity" - in the vicinity of a mature star like the Sun, the main effect here is the stellar wind, which will drive a velocity field radially outwards from the Sun, so there will be no net difference between a prograde and a retrograde orbit. The next order effect (which is dominant for young stellar systems) would, I think, be the leftovers accretion disk, i.e. the disk out of which all the planets formed. In the disk, you'd have a velocity field moving with the disk, while away from the disk, you'd have the stellar wind driving the same sort of radial outwards velocity field. Between these two regions would be some sort of transition between the two, which depends on the details. In the Solar System, the gas and light dust particles in the disk have long since been blasted away by the solar wind, or else are now part of planets or other large bodies. Only the bigger (large dust, pebbles, larger) particles would retain this rotation in the direction of the disk.

Away from the direct region of influence of a star (the Heliosphere for the Sun I guess), you get out into the interstellar medium, which is quite a mess. Turbulence reigns, so locally the velocity field is random. If you average over larger scales you'll trace bulk flows driven by gravity, pressure, galactic rotation, etc. Out in intergalactic space it's a similar story, though I think you end up with less instabilities driving turbulence and less pressure support so the velocity field will mostly just trace the large-scale gravitational field. To get into much more detail I guess you'd need to start calculating... in the sense of simulations with rather a lot of physics. I guess you'd be doing cutting edge research at that point!

Nitrogen and oxygen are heavy enough to remain trapped by Earth gravity. But helium is so light that, each time we pop a balloon or some helium leak from a MRI machine, the gas escape the planet forever. Even if helium is common in the universe, it is extremely rare on Earth. It can only be extracted from sealed gas pocket deep under ground. It is produced by radio active decay. Hydrogen is 4 times lighter so would escape Earth even faster than helium if the atom didn't have tendency to oxidize to form H2O. Brief, even if empty space contains 0.2 hydrogen atoms per square meter and possibly trace amount of helium, our planet would be unable to trap or capture such light weight atoms.

Not the answer you're looking for? Browse other questions tagged astrophysics orbital-motion planets drag or ask your own question.

13
Why is space a vacuum?
4
Orbit in the vacuum
1
Wave drag in the interstellar medium

3
Find true anomaly given period, eccentricity and time
0
Possibility of low-radius orbit?
27
How long until we fall into the Sun?
8
How many celestial bodies could be in stable orbit at roughly the same distance from a star?
3
How does the Pluto-Charon orbital 'dance' affect Pluto's elliptical orbit around the Sun?
0
Is the orbit of Earth currently decaying?
0
Orbit eccentricity and initial velocity
1
Wave drag in the interstellar medium
1
Does the inclination of the orbit affect the orbital period of a celestial body around the Sun?