How is Alpha Radiation possible?

Alpha radiation would seem to occur when a pair of protons and neutrons are magically plucked from the amorphous (i.e. having no particular structure) nucleus of a heavier atom.

Some of the problems associated with this approach, but which are conveniently ignored, include:

Because of the problems with orbital electrons, it is quite difficult to find a diagram that shows exactly how the alpha radiation process takes place. Most diagrams simply ignore the existence of the orbital electrons; a few show them, but only in an over-simplistic and unconvincing way (see lower figure below). 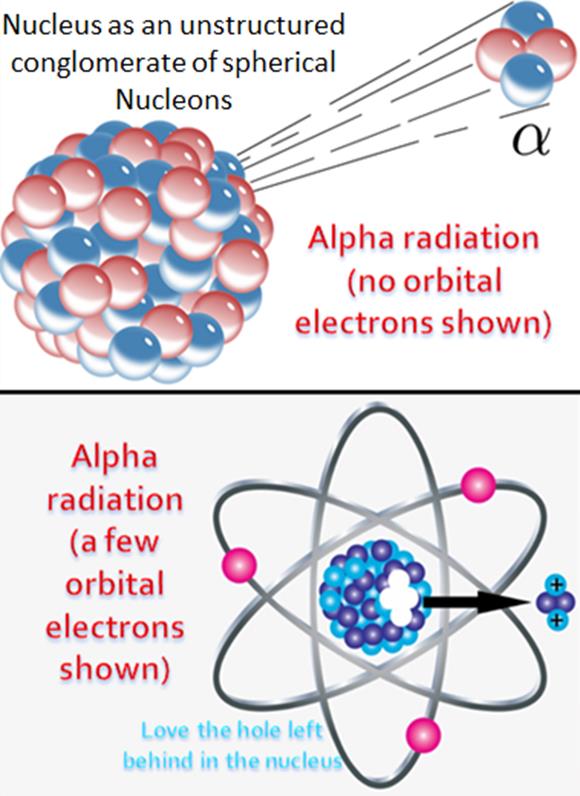 It's definitely not the case that the electron cloud is undisturbed. The process is quite violent on the scale of the atom undergoing alpha emission.

For example, here is a 1975 paper which reports the "shake-off" of electrons from polonium-210 nuclei during the alpha decay to lead-206. The experiment observed simultaneous alpha particles, emitted electrons, and x-rays from the filling of the "hole" in the lead's electron cloud. Current best results suggest about ten or fifteen electrons are ejected per million polonium alpha decays.

Why it's usually "conveniently ignored" is because chemistry is rarely of interest when discussing nuclear physics.

As for why it's specifically an alpha particle that separates from the nucleus:

An atomic nucleus is stable because its composition and arrangement form a local minimum energy state. If the nucleus were a macro scale object, classical mechanics would require that in order for it to change, such as by emitting some number of separated nucleons, it must first gain enough energy to climb out of that local minimum and cross a nearby local peak energy state on its way to a new and different local minimum. However, an atomic nucleus is actually small enough that quantum mechanics have strongly relevant effects, and quantum tunneling allows the nucleons to randomly skip past such a peak on occasion.

An alpha particle has an exceptionally low amount of energy for the number of nucleons in it, and emitting one also has minimal effect on the ratio of protons to neutrons in the remaining nucleus. These factors combined make the total energy of an alpha emission end state low enough for it to be reachable from the nucleus's ground state without violating conservation of energy.

Emitting a proton, neutron, deuterium, tritium, or helium-3 nucleus may be theoretically possible, but would require a higher initial energy state. Such high nucleus energy states generally only occur when another particle collides with the nucleus, and electromagnetic forces tend to prevent that in normal Earth environments.

These are exactly the same question I struggled with when I was young, but answers are rather simple.

Actually, way more than only 2 electrons get involved.

The nucleus that emits the alpha particle gets enough recoil not only to lose a great deal of its own electrons, but to leave a small ionized trace of its own.

The energy scale is linked to the timescale as well. Electrons regroup around the new nuclei (the alpha particle included) much, much later.

See the energy scale again. If it happens to interact with an electron of the parent atom, the only possible outcome is that the electron is also kicked out, not slowing the alpha particle much.

Which one of these mechanisms will happen depends mainly on the total energy (mass) of the decaying nucleus and the possible decay products.

Alpha particle is rather easy to emit because it has rather high binding energy, i.e. it has much lower energy than its constituent nucleons when separated.

Sometimes, more than one decay mode is possible when considering the energies involved. They really do happen (at different rates). In the quantum world, if a process is at all possible, it is obligatory.

With a particle accelerator (and patience, and proper detectors) one can kick whatever particle wants from a nucleus - including, but not limited to, deutrons, He-3 and likes.

Plain wrong approach. Nucleus is pretty much structured - protons and neutrons (separately) occupy orbitals pretty much like the electrons do. They are even called s,p,d,f just like electron orbitals are.

Nucleons are spherical... in a sense. The quarks inside have their own orbitals. Likely s-type because in the nucleons we have at most 2 quarks of the same sort.

Alpha particles leave an ion behind. However, it is the nuclear process rather than the ionization one the process that is studied. When an alpha particle passes near an electron orbital, the particle will probably take that electron indeed. That is an important property of alpha particles: they are very electronegative and tend to take any electron near them.

But, why are they Helium nuclei? Why not Oxygen?

In fact, it is because of the stability of the Helium nucleus. If the atom lost a Lithium nuclei this nucleus would get rid of two protons to become more stable, so that you end up with an alpha particle.

So if you are interested in nuclear decay, you can basically ignore the fact that the electrons are even there for all the effect they have on the alpha particle itself. The reverse is not true at all and the electrons are affected dramatically.

3
Do molecular bounded systems shield or reduce neutron cross-sections?
5
How does radiation degrade mechanical parts and electronic devices?
12
Is this a correct demonstration for why elements above untriseptium cannot exist?
3
How does mass-energy equivalence work differently in nuclear decay where there is nucleus excitation?
1
In fusion inside stars (sun) or very hot gasses, how do the electrons get bound and what about tritons and $D$-$T$ vs $D$-$D$ fusion?
0
How does radiation heating work at the fundamental level?
2
Is the Timing of Alpha Particle Radiation Perfectly Random?