Is possible to achieve an infinite speed in real life? [closed]

Ask Question
Asked 3 months ago
Modified 3 months ago
Viewed 134 times
-2
$\begingroup$
Closed. This question needs to be more focused. It is not currently accepting answers.

Original close reason(s) were not resolved

Is possible to achieve an infinite speed in real life?

I know beforehand that relativity theory forbids anything from travel faster than speedlight, so please stay with reading the full question first before answer - is more a conceptual/mathematical issue

For generality I will work with dimensionless units.

Imagine a point-particle system which position in time is described by the equation: $$x(t)=\frac{t}{2}\log(t^2)$$ and the particle starts moving at time $t_0=-0.2$ with initial speed and the experiments ends measuring its position at time $t_f=0.2$ following the equation $x(t)$. 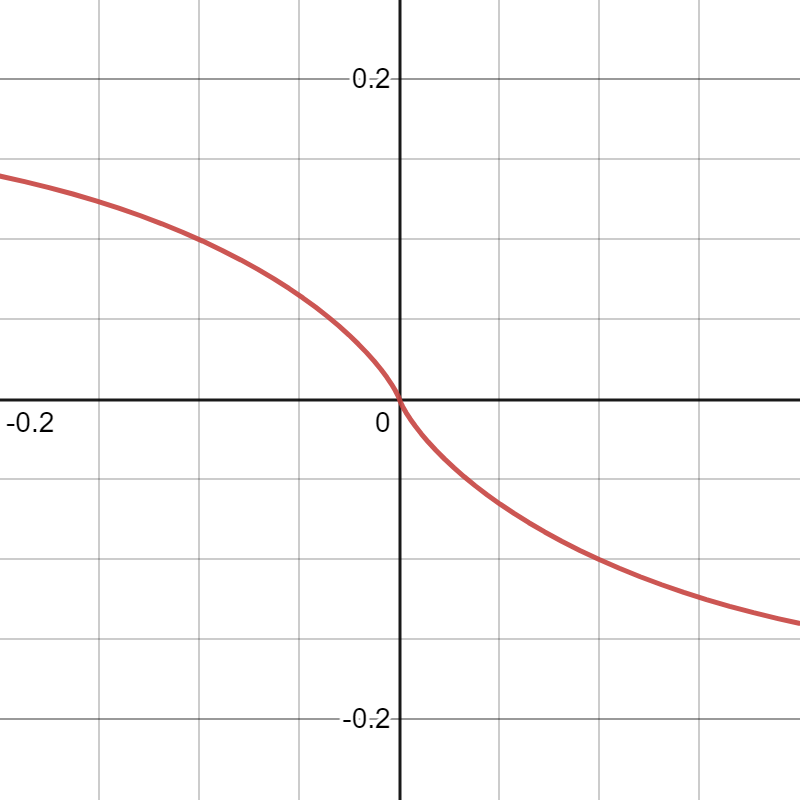 From the plot it look like something quite feasible to be done, but if I focus on their derivative I will note that there is a point in space where it maximum speed will rise to infinity without any discontinuity on the position of the particle: $$\frac{d}{dt}x(t) = 1+\frac{\log(t^2)}{2}$$

Since I am receiving some downvotes, I would like to made an explanation of why this question is interesting:

In this video I found by accident on youtube, Terence Tao, one of the most important nowadays mathematician, is reviewing finite-time blow up solutions to differential equations. There, he talk about the possibility of having this solutions which reaches infinity in finite time for the Navier-Stokes equation, which is indeed a widely known physical system.

Thinking in the speed limits rise in Relativity due to Einstein, I was wondering if this talk is just a mathematical curiosity which cannot be happening in real life, but then I saw this video about the Euler´s disk toy, where, for the wobbling rate the solutions indeed shows to have a finite time blow up (it just a frequency ratio so inertia restrictions indeed are not applying).

On this question, also I figure out that sometimes a finite time blow up could be thought as the reciprocal of a solution of finite duration to a differential equation (meaning here, it achieves zero by it own dynamics and stays there forever after).

So if some people are researching this kind of things, I was thinking that maybe something that achieving the blow up in their speed profile could also be possible (at least is possible in the math).... this is why I keep unitless/dimensionless the differential equations, since maybe a model where inertia is not involved could fit the presented situation.

Another example, the point particle could be the displacement of a shadow, as the example shown on this video.

Is this system attainable under current interpretation of physics laws?

Even if we backed off from current physical laws and considered only the physical laws known prior to Einstein, it still would be unattainable. Not only does the first derivative of the position diverge at $t=0$ but the second derivative also diverges. This means that the force required to make such a profile is infinite. We do not know of any attainable way to produce an infinite force.

I know beforehand that relativity theory forbids anything from travel faster than the speed of light [...]

Doesn't this answer your question?

From the plot it look like something quite feasible to be done [...]

Then the plot is deceiving, specifically around $t=0$.

Not the answer you're looking for? Browse other questions tagged newtonian-mechanics classical-mechanics singularities speed or ask your own question.

1
Is a reasonable assumption to consider that the contact point of the Euler's Disk (with stationary center of mass) trace this finite bounded spiral?

2
How I can see that everyday life systems behave classical (from QFT path integrals)?
9
Electron falling into proton approaches infinite kinetic energy why?
0
Are my observations about the differences between average velocity and speed, in 1 dimension, correct?
1
Solutions to Newton's laws with unbounded kinetic energy for inverted harmonic oscillator potential
14
Physically unacceptable solutions for the QM angular equation
3
Modeling friction with Non-Lipschitz ODEs - Pendulum example
1
Is it possible to built a variational principle for this first-order system?
1
Is a reasonable assumption to consider that the contact point of the Euler's Disk (with stationary center of mass) trace this finite bounded spiral?