An exercise about angular momentum in "The Mechanical Universe" (Frautschi)

I'm reading through "The Mechanical Universe" and I'm stuck with one exercise in the chapter about angular momentum. It goes like this:

A particle of mass $m$ is at the end of a rod of negligible mass and length $R$. 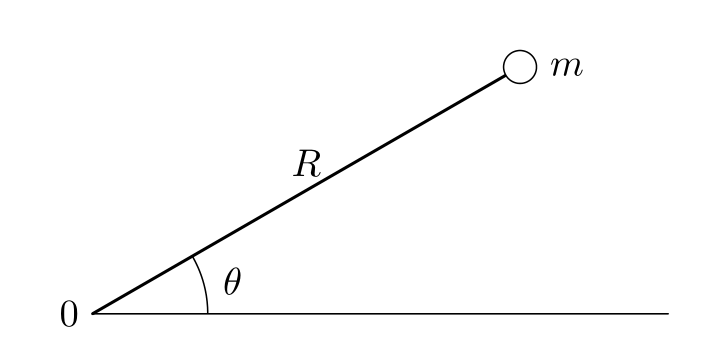 (FWIW, this exercise belongs to a section where angular momentum conversation hasn't been introduced yet, so I guess I'm not supposed to use that. Not that I knew how that would help...)

But I have no idea how to address the second point. I guess "with initial speed $v$" means that the velocity is directed to the right (in the picture). But how does this affect the motion of the mass? What forces, apart from gravity, are acting on $m$? Is it the tension of the rod pulling the mass towards the center?

I was also wondering what would happen if there were no gravity: Let's suppose the picture is a view from above where $m$ is attached to the rod (which is fixed at $0$) and everything happens on a frictionsless table. If the mass were started with some initial velocity what would the outcome be? Would it circle around $0$ forever? That would contradict conservation of momentum, wouldn't it? But if it stopped moving, wouldn't that contradict conservation of energy?

For this problem to make any sense, you need to assume that the rod rotates about a horizontal axis at point, O. Then your expression for the torque is correct. You have the torque as a function of position, but to get the change in angular momentum, you would need to integrate the torque over time. Instead, use conservation of energy to get the speed of, m, as a function of angle. From that you can calculate the angular momentumm, and the angular velocity. In the absence of friction, this system conserves energy, but linear forces from the axle prevent conservation of momentum, and a torque from gravity causes a change in angular momentum.

We already had from part 1 the magnitude $\tau = mRg\cos\theta$ of the torque.

$v_\theta$ must be perpendicular to the rod, so the magnitude of the angular momentum as a function of $\theta$ should be $L(\theta)=mRv_\theta$.

It again makes sense that the angular speed is proportional to the speed. The minus sign comes from the fact that the angle $\theta$ decreases when the mass falls.

Not the answer you're looking for? Browse other questions tagged homework-and-exercises newtonian-mechanics angular-momentum momentum torque or ask your own question.