Are we totally limited to the Milky Way for all stellar astrophysics?

Are we able to make any observations of the individual stars in other galaxies?

Is the depth of our scientific knowledge on star systems, based solely on stars in the Milky Way Galaxy alone?

Today, I just had a realization on how big the distance to any other galaxies are compared to the stars in our own Galaxy. I have been into space/pop-sci since I was a kid. I never thought about how limiting that huge gap must be in terms of astronomy.

Then I thought, Is this knowledge so easy to miss?

Did we come up with all of those cosmological theories purely/entirely based on detailed observation in our own Galaxy alone?

Just today, a new record was established in a brand new paper reporting the discovery of an observable star almost as distant in the Universe as it is possible to see. The discovery was possible due to a fortuitously placed cluster of galaxies whose gravity acts as a lens, focusing the light of the star in our direction.

Observations of stars in external galaxies are commonplace in astronomy. Of course, the dimmest stars are only observable in our own galactic neighborhood, but brighter stars are observable farther away.

As for dark energy and dark matter, dark energy has no measurable effect on our galaxy: its effects are only seen on much larger scales. Dark matter is very evident in clusters of galaxies, which don't contain enough visible matter to bind them together gravitationally.

Some of the observations have proved critical to cosmology and particularly in terms of pinning down the distance scale and establishing the size of the universe. Observations of pulsating Cepheid variable stars in the Magellanic clouds (which are satellite galaxies of the Milky Way) and the Andromeda galaxy, taken in the early 20th century, set the distance scale to external galaxies. These stars obey a period-luminosity relation, and it was only by observing many examples in another galaxy, where they are all roughly at the same distance, that this property could be discovered and calibrated.

Such observations continue to be made and refined (e.g. Vilardell et al. 2007) and can now be extended to even more distant targets, thanks to space telescopes, and linked to other distance indicators like type Ia supernovae (e.g. Hoffmann et al. 2016).

Many of our observations of supernovae have been in other galaxies. Type Ia supernovae (mostly) have a fairly consistent peak luminosity, which means we can use them to make a good estimate of the distance to their host galaxy. This was vital for Edwin Hubble's discovery of the expansion of the universe.

A rather important supernova was the first one observed in 1987, SN 1987A, a type II (core collapse) supernova in the Large Magellanic Cloud. The LMC is a satellite of the Milky Way, and this supernova occured about 168,000 light-years from the Solar System, which is relatively close on galactic scales, but it's still a legitimate extra-galactic event.

It was the first supernova that modern astronomers were able to study in great detail, and its observations have provided much insight into core-collapse supernovae. 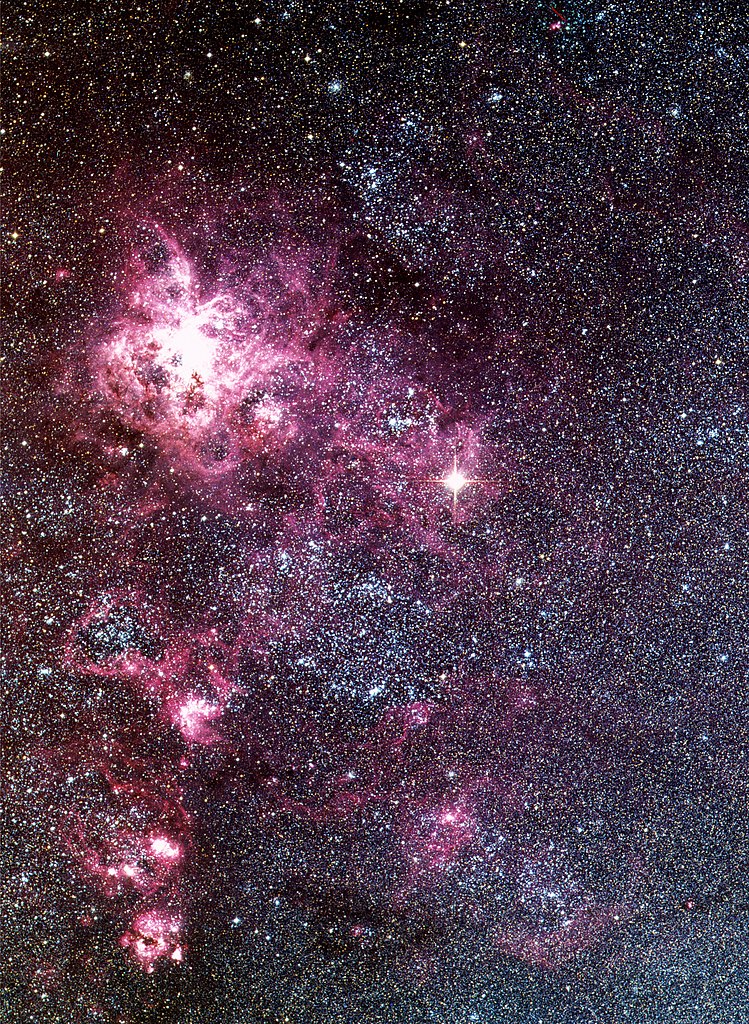 Supernova 1987A is the bright star at the centre of the image, near the Tarantula nebula.

Observations of this supernova provided good supporting evidence for our theories concerning core collapse events. We detected gamma rays from its radioactive nickel & cobalt, confirming that the energy from these nuclei is the major source of the long-term afterglow of the supernova.

Also, we detected neutrinos produced during core collapse before we detected the light from the explosion. Admittedly, we didn't detect many neutrinos, but those guys are very elusive. It's hard to detect them unless they have a lot of energy (kinetic energy > a million times their rest mass-energy), and even then you're lucky to see one neutrino per billion that pass through your detector. Almost all of the cosmic neutrinos we detect come from the Sun.

Individual stars have been observed in the Andromeda system. Just today observation of a very distant star by the Hubble telescope was reported. https://hubblesite.org/contents/news-releases/2022/news-2022-003

Much of our knowledge of gravity comes from afar. It was observation of the Bullet Cluster of 40 galaxies some 3.7 billion light years away that was considered the most obvious evidence of dark matter. They did this using gravitational lensing of the galaxies that were even further beyond the Bullet Cluster. Bullet Cluster

Have a look at the cosmic distance ladder. This ladder is how we know the distances to faraway galaxies. It works as a ladder: we anchor the shortest distances by the well-known parallax effect, then use that to calibrate the next rung in the ladder. A critical piece are so-called standard candles, which are objects of known brightness. If you know how bright they are intrinsically, then you can use their observed brightness to infer the distance to them.

Two standard candles are RR Lyrae variables and Cepheid variables. They are both stars, and are used to anchor the distances to galaxies. So the answer to your question is yes; we can resolve stars in other galaxies, or the cosmic distance ladder would not work (and it would be much less clear how far away those galaxies are).

21
How many stars are in the Milky Way galaxy, and how can we determine this?
50
How would we tell antimatter galaxies apart?
3
Dark Matter and Rotational Velocity Curves of Galaxies and Stellar Systems
0
Are combined masses in space, such as galaxies, considered to be uniform bodies? *In addition, a related question about force
6
Experimental Data for Mass Distribution of a Galaxy
3
Did dark matter cause the formation of the Solar System?
0
What models do physicists use in predicting the movement of stars in a galaxy that has lead to a wide-spread conviction that Dark Matter exists?
1
Could aliens harness stars to keep ahead of expanding universe?
1
Is the dark night sky paradox (Olber's paradox) really a paradox if we count with simple astronomical observations?