Is there a phenomenon where physicists are only interested in the standard deviation of the quantity to be measured?

One example which comes to mind is Brownian motion. Here you observe a small particle in a fluid (or more generally a small dynamical system coupled to a heat bath). The particle will jiggle back and forth in all directions, which is due to the kicks delivered by the thermal motion of the fluid around it. One then takes the average over many particles (or over time for one single particle if one is careful with correlations).

The important quantity here is the distance a particle has moved after a time delay $\tau$, which Einstein showed has a standard deviation that grows as $\sqrt\tau$. The mean of that distance is not very relevant and strictly speaking, in a vector sense, it is zero.

Often people will refer to values as an average over something else. Such as temperature of a gas being an average of the kinetic energy of the particles that make it up. It's true that we are referring to the same type of mean, however, it would still not be possible to make one measurement of the standard deviation. The stdev in this example would be the closeness of the kinetic energy of each particle to the average kinetic energy. However, this is not measurable because it does not represent something physical.

The mean/average value is something physical; it is the best approximation of a specified value of a large system that is composed of smaller systems (thus measuring the large system once should result in the mean value of the smaller systems). The stdev, on the other hand, is purely statistical; it is the best approximation of the precision of the data and is not measurable.

Having said that, as pointed out, there are occurrences where the stdev or distribution of the data is more interesting (not directly measurable still, but can provide more insight). As said, the Cosmic Microwave Background is one of the instances where the deviation of the data from the mean is more interesting than the mean of the data. In this case, it is because theories predict that the early universe should have been homogeneous; non-homogeneous distributions of variations in the CMB (our earliest view of the universe) would therefore give us better insight into the different processes and events that occurred during that early time.

In stellar dynamics, one of often tries to determine the mass distribution of gravitating systems (globular clusters, galaxies, clusters of galaxies, dark matter haloes,...) from the positions and velocities of their constituents. The simplest case are spherical systems with no net rotation. In this case the average velocity at every point is zero, while the velocity dispersions are linked to the gravitational potential through the spherical Jeans equation: $$ \frac{\text{d}\rho\sigma_r^2}{\text{d}r} + 2\frac{\rho\sigma_r^2}{r} - \frac{\rho\sigma_T^2}{r}= -\rho\frac{\text{d}\psi}{\text{d}r}, $$ where $\rho(r)$ is the density, $\sigma_r(r)$ and $\sigma_T(r)$ the radial and tangential velocity dispersion, and $\psi(r)$ the gravitational potential.

In nuclear and particle physics, the primary data of interest are scattering cross sections. In these data, the structure of the particle(s) of interest shows up through various "resonances" in your data (i.e. big spikes in the data set). These resonances correspond to states of the system of particle(s) (e.g. nucleus, proton, etc.) of interest. The width of each one of those resonances gives, through the Heisenberg uncertainty principle for decay-energy and decay-time, a the decay time for that state. This width can be approximated by the FWHM of the state, from which typically a more accurate fitting of a relativistic Breit-Wigner function (Lorentzian function in the non-relativistic case) is carried out. At the surface, one can imagine that this width is similar to the standard deviation of a Gaussian distribution, though in interpretation they are different. This information is absolutely critical for understanding nuclear structure, and it also has tremendous importance in astronomy, nuclear engineering, etc. 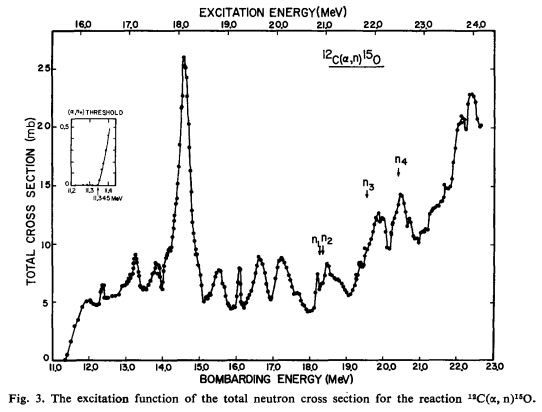 Not the answer you're looking for? Browse other questions tagged statistical-mechanics experimental-physics probability or ask your own question.

0
Why is the standard deviation the error on the singular measurement?
3
A question about error analysis, please help?
0
Lorentz distribution in emission peaks
1
When to round off standard deviations in uncertainty propagation?
1
Reporting an uncertainty lower than the precision of the apparatus?
1
Error on the mean of several measurements with error