What happens to water as it is increasingly compressed?

Imagine we put some volume of water in an infinitely strong container, and then start to slowly exert a force on the top of the water , with increasing pressure. What happens to the water over time? It would certainly begin to compress, but to what extent? would it turn into ice at some point?

This can be qualified by a phase diagram. This shows the most stable state of matter at a given combination of pressure and temperature (or other variables, but $p-T$ is most common).

The phase diagram of water, as can be found on Wikipedia, looks like this: 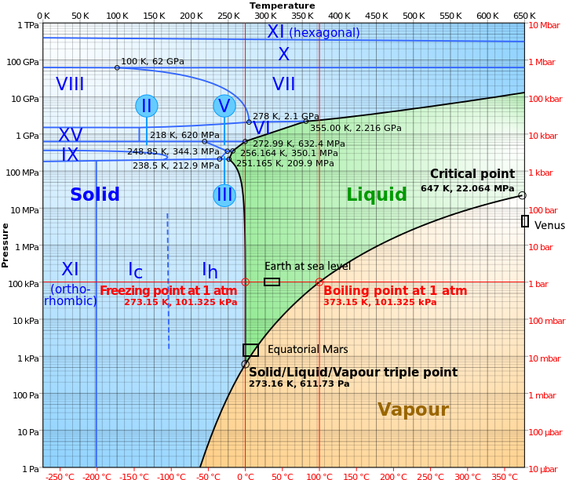 If we assume that temperature is constant during the process (maybe you apply the pressure slowly, so that the system can always equilibriate with the surroundings), increasing the pressure corresponds to going vertically upwards on the phase diagram.

If you start at room temperature and 1 atm, you have liquid water -- but if you compress it enough (to about 1 GPa), it becomes a solid!

You can also see that the solid water you will produce will not be the normal ice from your freezer (which is ice $I_h$), but an exotic phase of ice called ice VI. And applying even more pressure will convert it to other phases of ice, VII, X and XI. The differences between those solid phases are their crystal structure. Unlike liquid and gas, which can only have one phase (because the molecules can move around), a solid can comprise multiple phases. The atoms stay in one place (more or less), so their arrangement matters.

But because you proposed an indestructible vessel, you seem to be interested in really high pressures. I have not found what can happen to water, but stuff seems to be doing some really wierd things -- just check out metallic hydrogen. And the common salt NaCl seems to form some interesting structures, some of which can also behave as metals. So maybe, at some point, one could get metallic water...

And that is not the end. By compressing water to extremely high densities (or any other fermionic matter), you encounter the Pauli exclusion principle -- the electrons simply cannot get too close to each other. At this point, you will get something akin to a white dwarf. Compressing even more, the electrons and protons will combine to form neutrons and you will get a "neutron star"-like state. Even more pressure, and you end up with a black hole. Such states of matter are called degenerate. And that will truly be the end.

That depends on temperature, but generelly water would become solid (ice). In the wikipedia article on phase diagrams you can find water as an example. Note that at the same temperature (i.e. assuming an isothermal state change) it would become liquid again, as soon as you release the pressure .

Not the answer you're looking for? Browse other questions tagged thermodynamics pressure fluid-statics phase-transition phase-diagram or ask your own question.

13
What happens to the temperature when an ideal gas is compressed?
0
Thermodynamics- $PVT$ adiabatic system
0
what happens to air in spacecraft when it accellerates
2
Closed container buoyant force
0
About hydrostatic pressure affecting measured weight on a scale
2
Melting ice inside water by increasing pressure
0
Confused with pressure and condensation
0
What is to see on a pressure meter inside flash-freezing water in outer space?
0
What happens to water cooling at constant volume but above freezing?