Why do quarks have a fractional charge?

I am aware that evidence exists that strongly suggests the existence of quarks and do not doubt it. It is just simply really weird to me that they can have a fractional charge. While other elementary particles, such as the electron, carry an integer charge. So logically I would expect charge to be made up in discrete packets of charge just like energy is made up of discrete packets of energy called photons. And spin in particles comes in integers for particles as well. So it's just really weird to comprehend that in this one instance a subatomic particle has fractional charges.

Does this mean you can break up all other integer values assigned to other particles or subatomic particles? Or is this just a freak of nature and only happens in this one instance?

If I'm not being specific enough please try your best to answer what you think I'm asking and if need be I do not mind further enlightening what I am thinking about since I do not fully comprehend the standard theory of particles as I majored in a branch of physics considering general relativity and the universe on a whole.

Thank you if you can answer in the least technical answer possible.

It is just simply really weird to me that they can have a fractional charge.

By this I mean that it is a convention, to call it an integer of 1 as charge, and it is true that any charge measured macroscopically will be an integer multiple of this.

The proton also carries an integer charge in this convention, and that is one of the reasons that we can have matter as we know it, with atoms and molecules etc.

It is true macroscopically, all charges measured in absolute number are integer multiples of the electron charge

just like energy is made up of discrete packets of energy called photons.

This is a misunderstanding. Energy is an attribute of particles, the same way their location is space is an attribute. Photons have energy as do protons and electrons and all matter. $E=mc^2$ for particles and $E=h\nu$ for the photons where $\nu$ (nu) is the frequency.

And spin in particles comes in integers for particles as well.

Does this mean you can break up all other integer values assigned to other particles or subatomic particles?

The only reason we are adopting the quark terminology is that it has been found out that the protons and neutrons are not elementary particles.

The scattering experiments are ongoing, with higher and higher energies, and have showed us that protons and neutrons are composite and made up by three quarks. The painstaking gathering of many data resulted in the standard model of particle physics, which is a theoretical model that explains practically all observations up to now. This model has the quarks inherent in the description of the strong force . The other elementary particles in the table 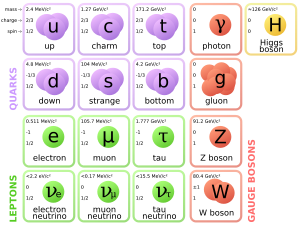 are mathematically on par with quarks in being the building blocks of the model.

Or is this just a freak of nature and only happens in this one instance?

If one considers compositeness a freak of nature than this is unique to the strong force: it holds the quarks in the protons and neutrons , and the spill over of that strength holds the nuclei together. As the real world is based on nuclei in atoms it is not one ignorable instance!

The number three comes from the study of the scattering experiments, and the symmetries displayed by a plethora of resonances .The 1/3 and 2/3 come from a higher order algebra, a group structure on which the standard model is based that makes consistent all the data we have of strongly interacting resonances and composite particles like the pions and kaons etc.

The fractional charge on quarks might be to different things.

I think you guys are just over-complicating the answer with unnecessary physics. And the answer for this question should be a general one for all physics/technical experiments, that is:

You are using measurement values (all values!) only to show relative difference between quantities. It doesn't really matter whether you assign a specific quantity with value of 1.0, 3.0 or 123123.1241. What matters is that this quantity is 3x bigger than that quantity.

As said before by others - this is only an assumption (or taken convention) that was made before discovery of quarks having, lets say, 'non-integer' charge. And after that physicists were so used to using "one electron charge" as a quantity, that redefining it into "one quark charge" would be too big overhead.

Please take a look at http://en.wikipedia.org/wiki/Planck_units

What Planck did was re-defining physical constants to make calculations easier. Whether you are using esu units or e-charge will basically matter only when doing numerical calculations and will not change underlying physics.

6
Do quarks violate quantization of charge?
15
Is it a coincidence that quarks have exactly -1/3 or 2/3 the electron's charge?
9
Is there an explanation for the 3:2:1 ratio between the electron, up and down quark electric charges?
5
Fractionally charged Quarks
0
A few questions on quarks, gluons and the strong force
1
Can the charge of $d$, $s$ and $b$ quarks be thought of as unitary charge?

19
What's the deepest reason why QCD bound states have integer charge?
1
What does a subatomic charge actually mean?
6
Why, fundamentally, are particles charged?
0
A few questions on quarks, gluons and the strong force
6
How can a particle without mass be useful?